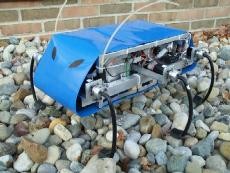 The IMA workshop on animal locomotion in June 1998 launched a collaboration between biologist Robert Full, mathematicians John Guckenheimer and Philip Holmes, and electrical engineer Daniel Koditschek. Their project, which includes the development of spectacular autonomous hexapod robots like the one pictured at right, has been funded for several years by DARPA.

In an invited 2006 SIAM Review paper, Holmes, Full, Koditschek, and Guckenheimer describe the initiation of the project: "This paper, and some of our recent work on which it draws, has its origins in a remarkable IMA workshop on gait patterns and symmetry held in June 1998, that brought together biologists, engineers and mathematicians... Workshop discussions in which we all took part also inspired the creation of RHex, a six-legged robot whose unprecedented mobility suggests that engineers can aspire to achieving the capabilities of such fabulous runners as the humble cockroach. In turn, since we know (more or less) their ingredients, such robots can help us better understand the animals that inspired them."

Neurophysiologist John Miller joined them in their proposal on "Neuromechanical Systems Biology: How exactly do animals move?", which received a $5,000,000 FIBR award from the NSF in September 2004 to pursue a highly interdisciplinary approach to uncover the neural and muscular control and feedback loops that govern the whole-body motion of animals.