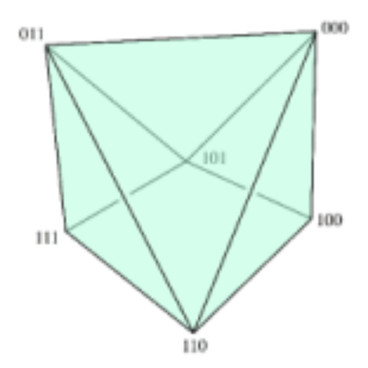 Can polyhedral geometry and commutative algebra—usually regarded as pure mathematics—help biologists? We at the IMA certainly think so, and the emerging applications of these mathematical areas to evolutionary biology was a major theme during a workshop bringing 135 mathematicians, statisticians, biologists, and computer scientists to the IMA in March 2007 as part of our year-long thematic program on Applications of Algebraic Geometry.

The evolutionary and developmental biology (EvoDevo) community apparently agrees as well. The article "Analysis of epistatic interactions and fitness landscapes using a new geometric approach" by Niko Beerenwinkel, Lior Pachter, Bernd Sturmfels, Santiago Elena and Richard Lenski, was the most accessed article in the journal BMC Evolutionary Biology in May 2007, with over 2,000 online accesses in the first three weeks of its appearance. This paper studies the reproductive fitness of 37 genetic variants of E. coli, based on data from long-term experimental studies of evolution in bacteria made in Lenski's laboratory at Michigan State.

Beerenwinkel presented this work, which uses computations with the algebraic geometry software system Macaulay 2 to find and interpret the fitness landscape for E. coli, at the IMA workshop. Pachter, an organizer for the workshop, Sturmfels, a former IMA postdoc, a member of the IMA Board of Governors, and a lead organizer of the IMA 2006-2007 thematic program were participants at the workshop as well.