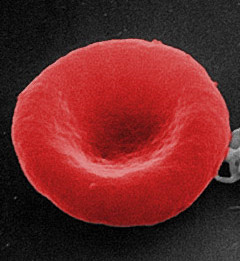 Red blood cells serve the critical biological function of delivering oxygen to all parts of the human body. Yet the cell’s ability to perform its job undergoes many changes as it ages. It will typically shrink in volume by 30 percent, while the membrane becomes increasingly stiff. The loss in elasticity of the membrane results in an impairment of their ability to pass through microscopic capillaries. The body copes with aging blood cells by recycling them after 100-120 days.

Using ideas from topology, the area of mathematics dealing with shapes, IMA researchers have developed an effective algorithm for quantifying cell membrane properties. IMA postdoctoral fellow Jesse Berwald and IMA visitor Sarah Day from the College of William and Mary, working jointly with scientists Madelena Costa and Ary Goldberger at the Harvard Medical School, devised the algorithm based on the mathematical notion of “persistent homology” that measures topological features of shapes and functions.

The membrane of a red blood cell exhibits spontaneous vibratory motions, referred to as flickering, which are associated with coherent bumps or depressions on its surface. These short-term flickering motions in the membrane have been shown to exhibit complex structure and dynamics over multiple spatial and time scales. However, this behavior is not static over the lifespan of a red blood cell and degrades with age or disease such that older or diseased cells show significantly different roughness and less temporal complexity than newly-formed and healthy cells. 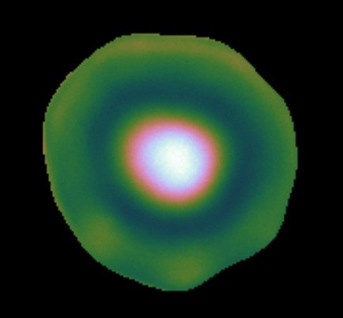 The algorithm extracts information about the cell membrane’s flickering characteristics directly from phase contrast microscopy images. Their discovery, which allows them to measure both spatial and spatio-temporal changes in the membrane, has established a way to distinguish the membranes of young cells from old, providing additional insight into the way in which the aging process affects red blood cells.

This research has the potential to aid health care workers in critical care facilities by providing a tool combining imaging technology with topological data analysis to limit the amount of aged blood provided to unhealthy patients. Intensive care patients who are given a blood transfusion containing a large percentage of older red blood cells may become even more ill as the body must first recycle the newly-introduced aged cells, causing undue stress on an already compromised system.