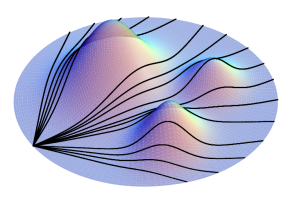 Inverse Problems are problems where causes for a desired or observed effect are to be determined. They arise in all fields of science and technology. An important example is to determine the density distribution inside a body from measuring the attenuation of X-rays sent through this body, the problem of "X-ray tomography."

Two types of inverse problems have intimate connections with a Riemannian manifold with boundary in differential geometry. For the first type of problem one considers solutions of the Laplace equation on the manifold. One imposes a function f everywhere on the boundary. Then there is a unique solution u of the Laplace equation with these values on the boundary and this determines the normal derivative of the solution at the boundary. The question is how to determine the metric at each interior point in the manifold if we know the normal derivative on the boundary for all boundary values f. This problem was solved by Matti Lassas and Gunther Uhlmann in 2001. An example application is Electrical Impedance Tomography (EIT) which has been proposed recently as a useful diagnostic tool. In this case the question is to determine the internal conductivity of a body by making voltage and current measurements at the boundary. EIT might be an useful inverse technique for early breast cancer detection since the conductivity of breast tumor is significantly higher than of normal tissue.

The second, seemingly unrelated inverse problem is to determine the metric at each interior point in the manifold if we know the geodesic distance I(x,y) between any pair of points x,y on the boundary. This is called the boundary rigidity problem. For example, our knowledge of the Earth's interior is indirectly derived from surface measurements. Scientists use the information provided by earthquakes to penetrate deeply into its interior. Mathematically, this is an inverse problem: Can one determine the sound speed of the Earth from travel times of seismic waves? In this case the sound speed depends on direction as well as position and is modeled as a Riemannian metric. Finding the sound speed at each interior point is just the boundary rigidity problem.

A connection between these two quite different inverse problems was proposed, as a conjecture, at the lecture by Uhlmann at the IMA summer school on on "Geometrical Methods in Inverse Problems and PDE Control" in the summer of 2001. Leonid Pestov and Uhlmann started to work on this problem at the IMA workshop and in 2005 solved it for two-dimensional manifolds. They showed that the geodesic distance data on the boundary from the second problem enables one to to determine the map relating the function f and its normal derivative on the boundary from the first problem, hence to determine the metric. The result has now been extended to manifolds in higher dimensions.