Mission and Goal of FTPI

The William I. Fine Theoretical Physics Institute (FTPI) was established in 1987 as part of the School of Physics and Astronomy, with the explicit goal of conducting research in theoretical physics at a world-class level. The most important charge of FTPI is to produce sound, significant and exciting theoretical physics that will have an impact on the school, the College of Science and Engineering, the University and the broader physics community.

The Institute hosts a prominent visiting scholar program, workshops, seminars, and a highly regarded public lecture series. Through these outreach programs, the Institute serves to advance theoretical physics, further connections with other scientific research disciplines, industrial research initiatives, and academic sectors. In addition to its noteworthy contributions to academia, the Institute provides a forum in which prominent theorists from around the globe educate, collaborate, and collectively pursue novel solutions to fundamental questions in theoretical physics. The work of the Institute facilitates the mission of the University by enriching the people of the state, the nation, and the world through its Research, Teaching, and Outreach programs. 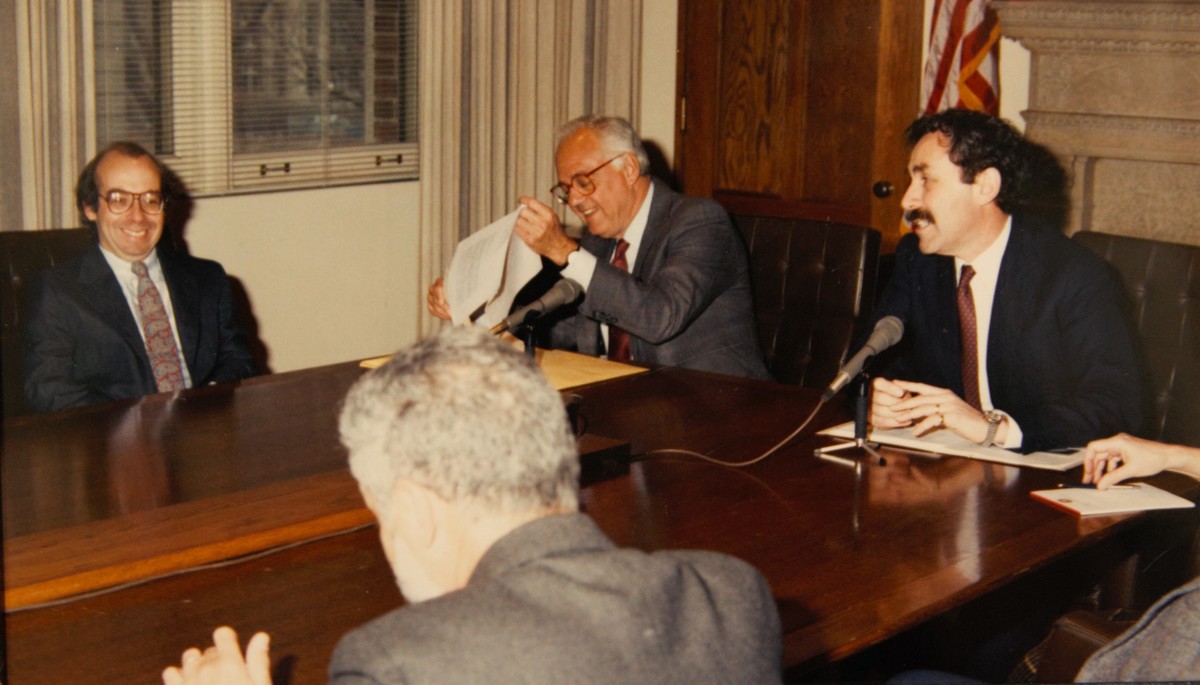 A History of FTPI by Steve Gasiorowicz

The creation of the Theoretical Physics Institute is a direct consequence of Bill Fine's lifelong interest in the physical sciences. As he told me back in the 80's, he first got excited about physics when reading the World Book Encyclopedia. Although his career took him through legal work as assistant district attorney in Dallas, Texas, judge advocate trial lawyer for the U.S.A.F. and a private attorney to real estate development, his interest in physics continued. Bill kept up his reading in the field so that he actually was well informed about the advances of the last quarter century.

Bill Fine and I first met at a party in the early 1980's. We had a number of conversations on the current advances in the understanding of the fundamental laws of physics. In this context, Bill asked how he could contribute to the advancement of physics, and responded very warmly to the suggestion of the formation of an institute devoted to theoretical physics.

We tried to do some fund-raising in the corporate sector, but it soon became clear that theoretical physics was not a disease, and potential donors were more drawn to those higher-profile causes. Additionally, the response of the Institute of Technology of the University of Minnesota to the first proposals for such an institute were so cautious that it did not seem likely that these ideas would bear fruit. It was therefore critical that in 1985 I introduced Bill to Gloria Lubkin, who was the editor of Physics Today. She soon became an advisor, pointing out that the proposals themselves were on too small a scale, and that it would be necessary to bring the top levels of University administration into the planning. She also suggested bringing in Leo Kadanoff as advisor, consultant, and spokesman and, in our minds, a potential director.

In the summer of 1986, during a festive and intense get together in Minneapolis, Bill and Leo, with strong support from Chuck Campbell, outgoing head of the School of Physics and Astronomy, and his successor Marvin Marshak, persuaded then-President Ken Keller of the merits of building a Theoretical Physics Institute at the University. Starting from a very generous pledge by Bill Fine, the University committed itself to matching Bill's gift to create two chairs (subsequently split into three), and to provide permanent funding on a magnitude to support an active, vibrant institute.

Some years ago I read a collection of essays and reviews by Ludwig Boltzmann. One of the essays, entitled "Journey to Eldorado," describes his visit to the University of California at Berkeley in 1905. One of the experiences that he remarked on was a side trip to Stanford University, which had been endowed by Leland Stanford's widow. Boltzmann writes how remarkable that seemed to him; at home he said, he would have expected the founding of a hospice for abandoned kittens. The tradition of private funds being used to create centers of learning, be they universities, libraries, museums or institutes, is an old one in the United States, but it is not always that it is rooted in the passionate interest of an individual in a field so far removed from practical pay-offs.

The Theoretical Physics Institute (TPI) officially came into existence at the end of January 1987. I was appointed acting director, and during the period of 1987-89 we conducted a vigorous search for a director. There was no predetermined choice of fields that were to be covered, but the goal of the TPI was to become a center of theoretical physics research of the highest quality, so as to make a permanent impact on that field. Right from the start it was envisaged that the first goal of the director would be the recruitment of a first-rate faculty to the TPI. The faculty, guided by the director and the newly created oversight committee, were to set the direction of activity at the TPI. The TPI would serve as a center of attraction for postdocs and long- and short-term visitors, and to help in the rapid dissemination of new directions in research through timely workshops in a variety of fields of physics.

In the period before we actually appointed a faculty, the Institute organized a number of high-level conferences/workshops on a variety of topics such as Quantum Electrical Engineering, Quantum Mechanics of Macroscopic Variables, Baryon Number Non-Conservation in Electro-Weak theory, The Geometric Phase [1], Neural Networks for Physicists and many others. In addition, many colloquia were given by distinguished visitors, and some of these were published in the two volumes Trends in Theoretical Physics (1988- 1990), edited by Paul Ellis and Y.C. Tang (Addison Wesley).

In 1989, Larry McLerran, whose research activity centered on high energy theoretical physics, became the first director of the TPI. It was decided at that time that the activities at the TPI would be evenly split between high energy physics and condensed matter physics. Very early in his tenure, Larry, in close collaboration with Gloria Lubkin, who was very active on the Oversight Committee, decided to take advantage of the unique opportunities presented by the break-up of the Soviet Union. In short order, five extremely creative and productive physicists were recruited from the former Soviet Union: Arkady Vainshtein, Boris Shklovskii, Leonid Glazman, Mikhail Shifman and Mikhail Voloshin. This group, together with the later additions of Anatoly Larkin and Keith Olive, formed the permanent membership of TPI. Through their research, their intensive interaction with the international theoretical physics community, and their role as mentors to postdocs and visitors, they are making the impact on the field that was hoped for when the TPI was first conceived. Their research has received world-wide recognition, and their many students and postdocs have moved on to distinguished careers in universities research laboratories and industry.

The members of FTPI have been honored with a number of prizes. Leonid Glazman held a McKnight Presidential Endowed Chair, Keith Olive is a Distinguished McKnight University Professor and Boris Shklovskii is the recipient of the Landau Prize. Three faculty memebers have been awarded the Sakurai Prize: Arkady Vainshtein and Mikhail Shifman in 1999, and Mikhail Voloshin in 2001. Arkady Vainshtein also received the Pomeranchuk Prize, and Mikhail Shifman was recently honored with the Lilienfeld Prize. Anatoly Larkin, one of the world leaders in the field of condensed matter theory was awarded the Hewlett Packard Europhysics Prize, the London Prize in Low Temperature Physics, the Onsager Prize in Theoretical Statistical Physics and the Bardeen Prize for Superconductivity It was a great blow to FTPI and to the world-wide community of physicists when Anatoly Larkin, still deeply involved in research and the teaching of theoretical physicists, died suddenly on August 4, 2005.

In 2002, at the time of the fifteenth anniversary of the founding of TPI, the Institute officially changed its name to the William I. Fine Theoretical Physics Institute (FTPI), to honor Bill Fine for his critical role in the creation of the Institute. Sadly, Bill Fine died shortly after he received this recognition, on May 18, 2002.

A recent expansion of the outreach of the Fine Theoretical Physics Institute was made possible by an endowment provided by Irving and Edythe Misel, who were close friends of Bill's. The endowment provides for an annual public lecture, "The Misel Family Lecture." The first Misel Lecturer (2006) was Frank Wilczek, Herman Feshbach Professor of Physics at MIT. The 2007 Lecturer will be Leo Kadanoff, the John D. and Catherine T MacArthur Distinguished Service Professor of Physics and Mathematics at the University of Chicago.

The Institute has benefited greatly from the advice and guidance of the Oversight Committee. It was originally co-chaired by Bill Fine and Gloria Lubkin. At the start it included Leo Kadanoff and the late D. Allan Bromley. After Bill's untimely death, his role has been taken over by Bianca Fine. Serving with them have been Frank Wilczek, Bert Halperin, Helen Quinn, C.C. Huang, Ken Keller, David Nelson, Erick Weinberg, Steven Girvin, Allen Goldman, and David Kohlstedt. For a current list of members please see our FTPI Oversight Committee page.

[1]This Conference led to a book on the theory and on many applications of the geometric phase in physics and chemistry, Geometric Phases in Physics, Alfred Shapere, Frank Wilczek (Ed), World Scientific 1989.