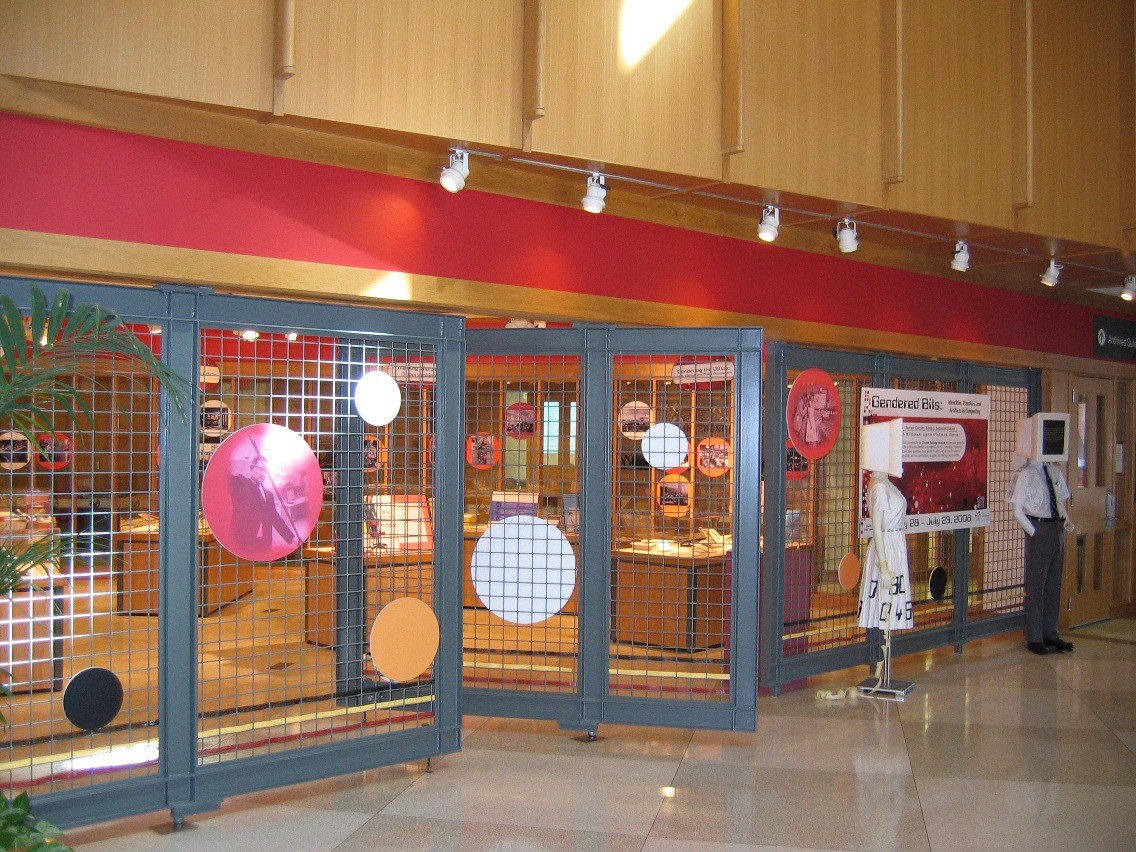 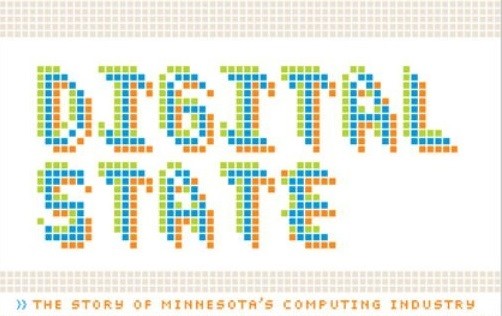 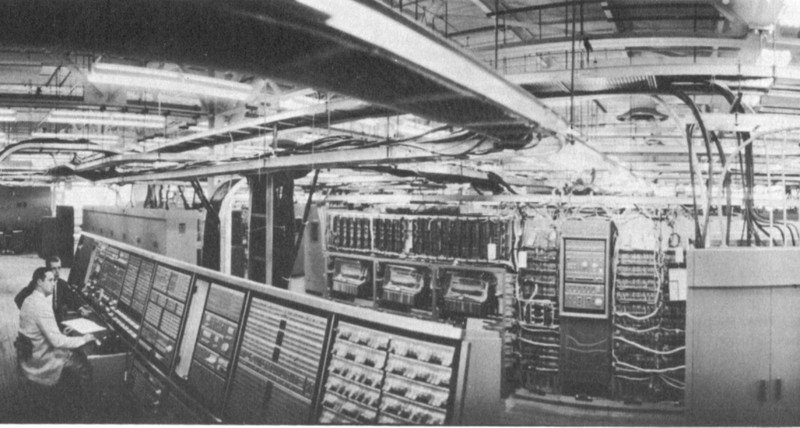 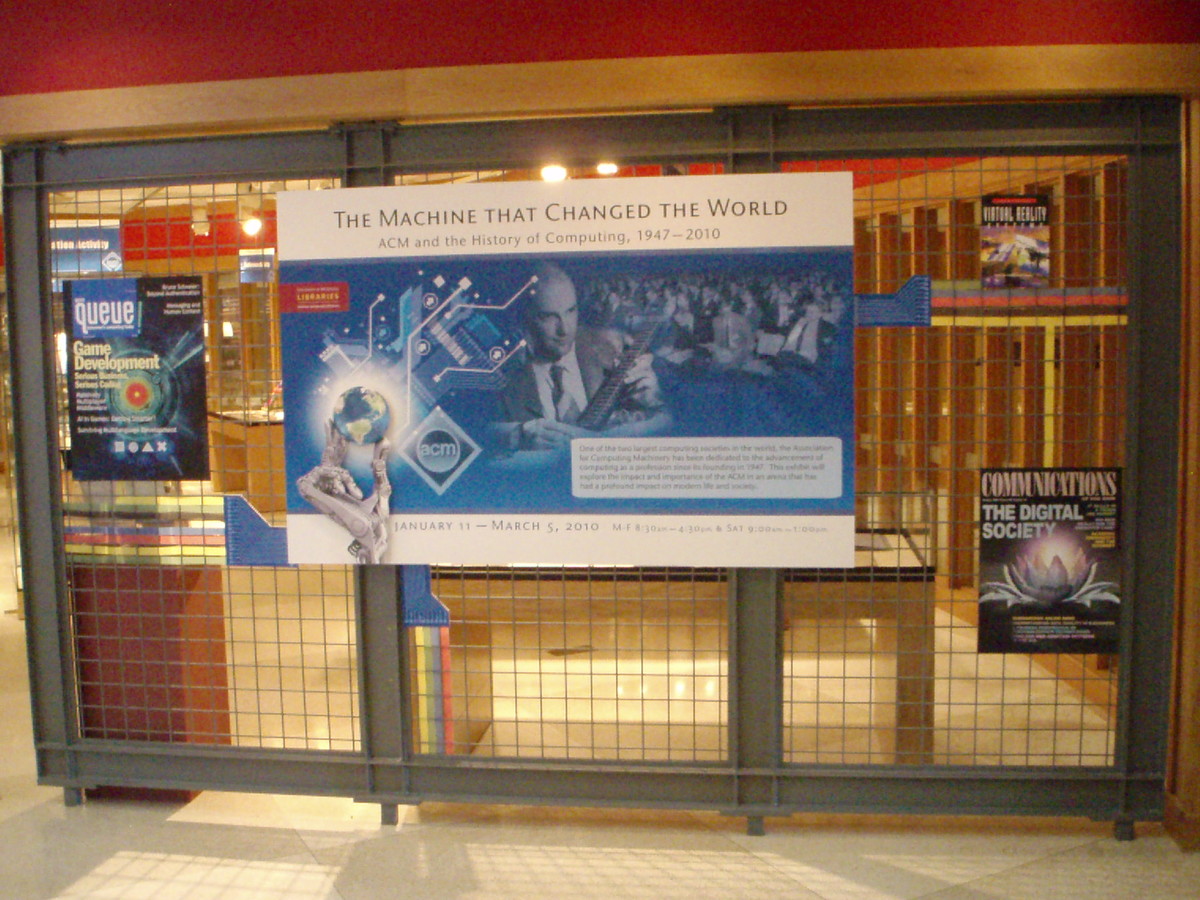 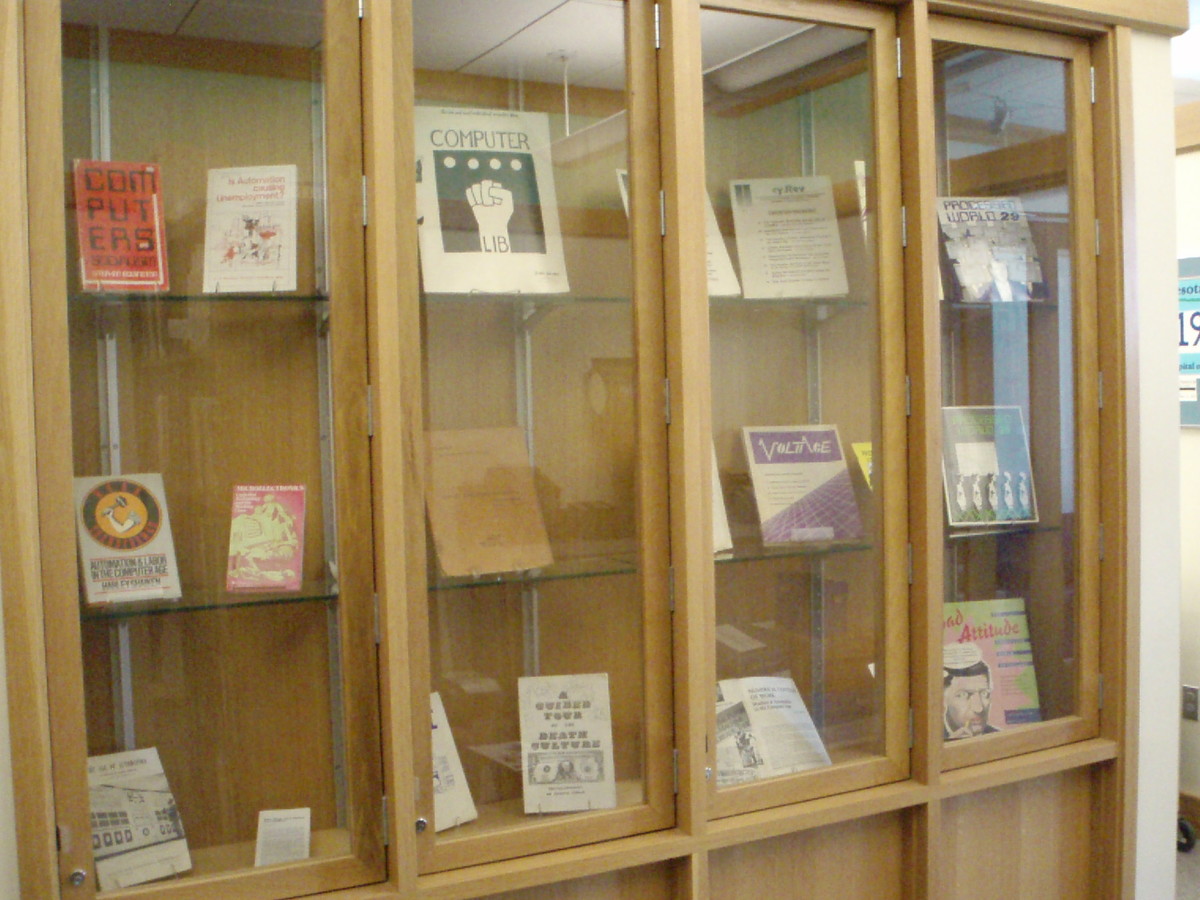 As part of our mission, CBI engages in programming of several gallery and digital exhibits each year in collaboration with the Department of Archives and Special Collections at the University of Minnesota Libraries. Along with digitizing these physical exhibits to continue serving as a resource, CBI has also established a collection of born digital exhibits relating to special projects, collections and publications as a way to educate the public to have a greater understanding of the impact of computing on information, and culture for the past, present and future.

Our gallery exhibits are found in both The Elmer L. Andersen Library first floor Atrium Gallery and our own exhibit cases located in and around Suite 211 on the second floor of the Andersen Library.

Throughout the 1970s and 1980s, Ben Shneiderman documented the many computer conferences, lectures and colloquia happening across the United States and around the globe. In attendance at many of these events were pioneers of the early high-tech industry. This exhibit features thirty of Ben's photographs, depicting foundational people in computer science, including (amongst others) Grace Hopper, Carl Hammer, Jean Sammet and Joseph (J.C.) Licklider. 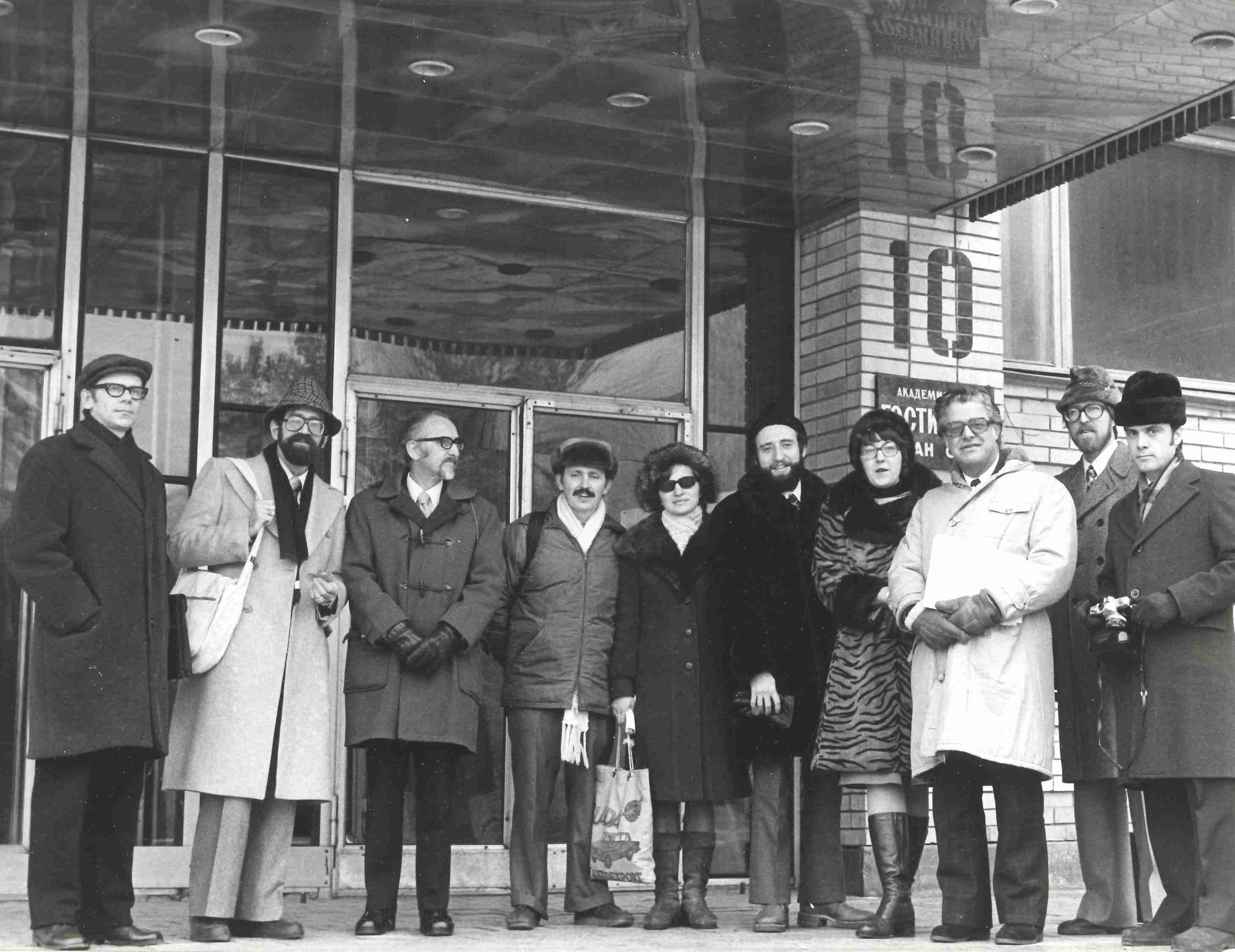 The Eyes See What the Heart Feels

From the Archives of Photographer & Painter Adger Cowans

This exhibition takes a sweeping retrospective look at the life and work of photographer and painter Adger Cowans. Materials from his archives display key thematic moments from the late 1950s to the present including water studies, jazz portraits, Hollywood portraits, and street scenes. Also featured are a selection of paintings and the production archives of the autobiographical artists’ book published out of a collaboration between Cowans and 21st Editions that reveals the spiritual nature of this master photographer and painter.

A new book on Adger Cowans is part of the 21st Editions series, which is included in the University Libraries’ Francis V. Gorman Rare Art Books & Media Collection. 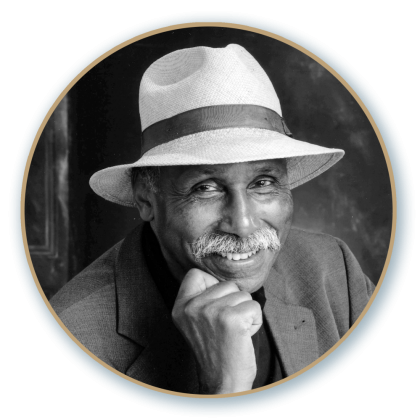 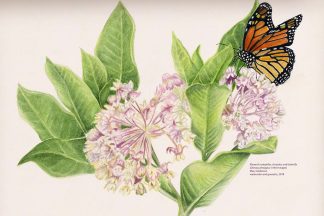 April 11 through August 12, 2022 at Elmer L. Andersen Library on the U of M west bank Minneapolis campus

The Flora and Fauna Illustrata collection is the Andersen Horticultural Library’s ongoing project to document all the species of plants, animals, insects, and fungi living at the Minnesota Landscape Arboretum through scientifically accurate fine art.

The FFI collection is currently made up of over 90 juried two-dimensional works of art donated by over 30 different artists, many of whom are local. This exhibition features selected outstanding works from the FFI collection, from aspens and butterflies to turtles and water lilies, as well as process materials from FFI artists.

Learn more on the U Libraries exhibit page. 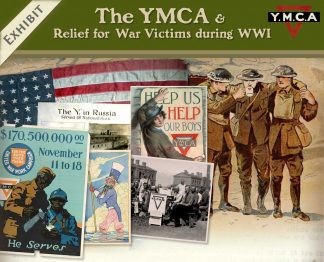 The YMCA and Relief for War Victims during WWI

Between 1914 and 1918, one of the largest, deadliest wars ravaged much of the world. As tens of millions became entangled in the conflict, men and women from the Young Men’s Christian Association [YMCA] waged a parallel fight — a fight to comfort, heal, and uphold the spirits of those impacted by the war.

Ultimately, the YMCA deployed 25,926 men and women at home and abroad in the trenches, training camps, leave areas, and prisoner-of-war camps.

This exhibition explores these courageous actors and the significant aid they provided to the armies and civilians of both the Central and Allied Powers, and is made possible through the recent acquisition of the personal papers of Rev. Walter Teeuwissen, a YMCA Chaplain who served Austrian-Hungarian war prisoners in Siberia.

Initially set to open in 2020, this exhibit was a companion to the conference “Relief, Culture, and Allegiance: Humanitarianism in World War I and its Aftermath,” which was canceled due to the pandemic. With gratitude we thank the conference organizers Dylan Mohr (University of Minnesota), Lena Radauer (Albert-Ludwigs-Universität Freiburg) for their curatorial contributions. 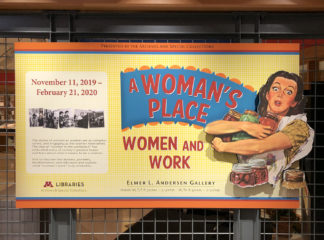 A Woman’s Place: Women and Work

Originally on display in Andersen Library from November 2019 to March 2020, the "A Woman’s Place: Women and Work" exhibit is now available online. Featuring historical materials from across the University of Minnesota Libraries’ Archives and Special Collections, this exhibit explores the myths and realities of women as workers, taking a look at their roles as laborers, volunteers, creators, protestors, and more. The exhibit also focuses on race and class, and how these identities have impacted women’s opportunities and informed public perceptions of working women. The exhibit designed by Darren Terpstra was co-curated by Caitlin Marineau (Assistant Curator for the Children's Literature Research Collection, as well as Kate Dietrick (Archivist for the Upper Midwest Jewish Archives) and Linnea Anderson (Archivist for the Social Welfare History Archives), and the online exhibit was created by intern Ashley Walker, an MLIS student from St. Catherine University. Charles Babbage Institute archival materials that were contributed touched on themes of race and employment, child care, and famous women innovators.

The Machine That Changed the World: ACM and the History of Computing, 1947-2010

In 2008, the Association for Computing Machinery (ACM) donated 57 boxes of information about its administration, operations, and projects to the Charles Babbage Institute. According to its website, ACM "is an international scientific and educational organization dedicated to advancing the art, science, engineering, and application of information technology, serving both professional and public interests by fostering the open interchange of information and by promoting the highest professional and ethical standards." The exhibit, originally featured in the Andersen gallery in early 2010, told the story of the society’s development and expansion over the first 60 years of its existence. A digital companion piece to the exhibit was also created and can be found here. 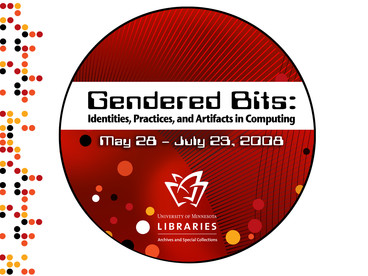 From May 28 through July 23, 2008, the Charles Babbage Institute's (CBI) then Archivist, R. Arvid Nelsen presented the exhibit Gendered Bits: Identities, Practices and Artifacts in Computing. This exhibit brought to the forefront a discussion on the critically important theme of gender in computing, specifically the notable inequity in gender representation -- or "gender gap" -- in contemporary computing professions.

If interested in viewing images of the displays from the original exhibit shown in the Andersen Gallery, please contact us. 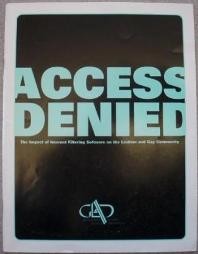 During his time with CBI, former archivist Arvid Nelsen accumulated several sources for the in-suite exhibit on Social Issues in Computing. These included many collections and materials on the history of computing which document the development of the technology itself and of the persons and companies responsible for it. The perspective represented often seems neutral with perhaps an implicit sense that such developments are or were positive. Such a perspective, however, is and has not been universal. 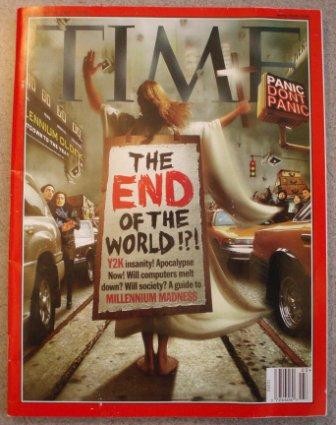 Preparing for an Apocalypse: Y2K

Y2K – also known as the Millennium Bug, or the Year 2000 Problem – was caused by a shortcut taken by early computer programmers. To conserve memory space, early programmers recorded the year using the last two digits rather than four. Computers using this system would then recognize the year 2000 as the year 1900 instead, potentially causing serious problems in many different sectors of business and government.

Computers were envisioned breaking down or behaving erratically. With the extent to which computers had by then become a part of so many machines, cars and appliances, the potential problems seemed enormous and some people feared a complete collapse of societal infrastructures. When this did not occur, society moved on and forgot how important a subject this was on a global scale just a short time ago. The materials seen in this exhibit demonstrate a range of institutions and approaches to the Millennium Bug, from governmental preparations to personal disaster planning. 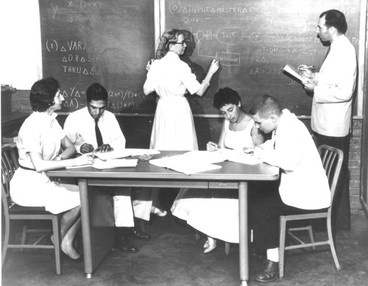 Intended as a companion piece to the book Gender Codes: Why Women Are Leaving Computing by former director of the Charles Babbage Institute Thomas J. Misa, this exhibit provides a unique international perspective and reveals how computing has become male-coded, highlighting the struggles women have faced in the office, the media, and in culture at large. 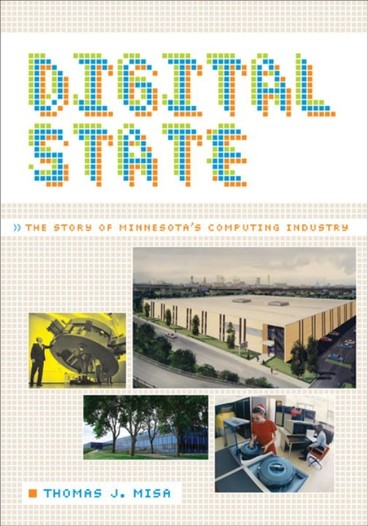 Minnesota-based companies such as Engineering Research Associates, Univac, Control Data, Cray Research, Honeywell, and IBM Rochester were major international players, and together formed an unrivaled epicenter advancing digital technologies. Digital State reveals the inner workings of the birth of the digital age in Minnesota and shows what we can learn from this era of sustained innovation.