On Friday and Saturday, October 23 - 24, CBI held its interdisciplinary online symposium, “Just Code: Power, Inequality, and the Global Political Economy of IT,” co-organized by CBI Director Jeffrey Yost and UC Davis STS Professor Gerardo Con Diaz. The symposium was a grand success by every measure, from its size and worldwide reach to its intellectual engagement on critical issues—the various ways that code (software) and codes (surrounding practice, policy, and culture) have reinforced and often greatly accelerated racial, ethnic, gender, class, disability, and intersectional inequalities. The event was generously sponsored and co-sponsored respectively by the Alfred P. Sloan Foundation and 18 different colleges, academic departments, and centers of the University of Minnesota—the support indicative of the strong buy-in for CBI’s interdisciplinary programming and the themes and framings of this event. We are extremely grateful for the support and the wide and diverse participation. 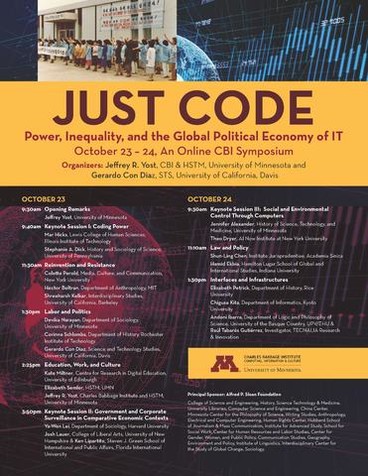 More than 340 attended the two-day event from several dozen countries. Most attendees were faculty, postdocs, and graduate students from a range of disciplines at colleges and universities globally, but there were also attendees from government, industry, nonprofits, and the general public. With our survey post event, more than three-quarters of the attendees rated the intellectual content “excellent” (a rating of 4.7 out of 5) and it scored extremely high across the board (4.5 to 4.7 in all categories).

CBI Director Jeffrey Yost kicked “Just Code” off with remarks on CBI, highlighting its newly refocused interdisciplinary mission. He next turned to position the event, offer a thanks to sponsors (with an accompanying video welcome from CSE Dean Mos Kaveh and UL Dean Lisa German), and then chaired the opening session, “Coding Power,” with papers from past Tomash Fellow, Illinois Institute of Technology Humanities Professor Mar Hicks and University of Pennsylvania History and Sociology of Science Professor Stephanie Dick. Professor Hicks brilliantly analyzed labor, control, and resistance in post-Colonial India as it was supplied by British computing national champion ICL. Professor Hicks also richly analyzed power and computing in broader context with historiographical discussion of race and gender. Complementing this terrific talk, was an equally impressive and insightful one by Stephanie Dick. Drawing on CBI and other resources, Professor Dick offered a compelling narrative interwoven with contextualizing theory on the first statewide database and biometrics system, the NYSIIS. Her presentation was a path breaking examination of race, criminal justice databases, and the prehistory and early history of artificial intelligence predictive policing applications.

To close day one was the second keynote session “Government and Corporate Surveillance in Comparative Economic Contexts.” Harvard Sociologist Ya-Wen Lei provided tremendous depth and understanding in a stellar talk exploring platforms, control, and resistance in China. Univ. of New Hampshire information scholar Josh Lauer and FIU Historian Ken Lipartito complemented this in providing a wonderfully compelling examination of surveillance, one highlighting both deep historical roots as it also very significantly informed on our current age, capitalism, and challenges of growing inequalities with computing and network surveillance.

To launch day two, the third and final keynote session was “Social and Environmental Control Through Computers,” which was composed of two of the most creative talks of the event. UMN HSTM’s Jennifer Alexander offered an extremely thoughtful and powerful talk on psychopathology and the human computer interface. Past Tomash Fellow and NYU AI Now Institute Historian Theodora Dryer followed with an exquisitely designed, deeply researched, and eloquently presented talk that stressed continuities with early post WWII input-output economics and long persisting algorithms, thinking, and systems dominating water resource policy--the “streams of data” and analytics at the heart of environmental racism in the decades that followed.

These set the tone for a great array of fascinating and impactful talks to round out day two that included papers on free/open software relicensing (Sinica’s Shun-Ling Chen), political economy and corporate collusion in IT  (Indiana’s Hamid Ekbia), computerized conferencing and disability (Rice’s Elizabeth Petrick), and character codes in Japan (Kyoto’s Chigusa Kita).

Sessions were chaired by the organizers, HSTM faculty Sally Kohlstedt and Honghong Tinn, and speakers Stephanie Dick, Elizabeth Petrick, and Corinna Schlombs. Con and I are so grateful to the tremendously talented speakers, to the chairs, to the cosponsors, to CBI Archivist Amanda Wick and CBI Admin Melissa Dargay, to our graduate student associates Lauren Ruhrold (HSTM, UMN) and Katherine Buse (STS, UC-Davis), and to the engaged audience. Everyone added so much to make this event very special.

The revised papers from Just Code will be published by a major university press and video online posting and access to the session/talks of the event will occur after the book is published.

I will close by acknowledging all our critical sponsors, co-sponsors, and contributors that provided essential support to make it all happen. The Primary External Sponsor was the Alfred P. Sloan Foundation. At the University of Minnesota college level sponsors were the College of Science and Engineering and University Libraries. The Principal Program co-sponsor was the History of Science, Technology, and Medicine. The Principal Department co-sponsor was the Computer Science and Engineering Department. Primary co-Sponsors included the China Center, MN Center for Philosophy of Science, and Writing Studies. Co-sponsor included the Hubbard School of Journalism and Mass Communications, Anthropology, Human Rights Center, IAS, Electrical and Computer Engineering, and the School of Social Work. Contributors included Sociology, Communication Studies, Geography, Environment & Society, Institute of Linguistics, Interdisciplinary Center for the Study of Global Change, and Center on Women, Gender, and Public Policy.

Back to Bits & Bytes