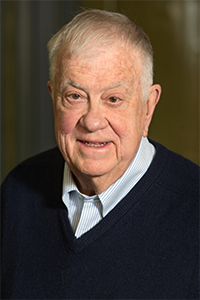 In 1996, Garrard received the Educational Award for Excellence from the U.S. Army Soldier System Command for his work in parachute systems. Garrard is a Fellow in AIAA “For a career of outstanding contributions to aerospace engineering education, to the development of methods for advanced flight controls, and to aerodynamic decelerator technology. In 2003, he was awarded a Certificate of Appreciation by the AIAA in recognition for "the many years of organizing, coordinating, and conducting the H. G. Heinrich Parachute Systems Short Course and for the large number of parachute engineers it has produced." In 2005, Garrard was selected as an AIAA Fellow and in 2006 he was the recipient of the J. Leland Atwood award. This award is jointly sponsored by ASEE and AIAA and is presented to recognize a recent outstanding educational achievement and to encourage innovative improvements in aerospace education.

Garrard served as the Director for the NASA Funded Minnesota Space Grant Consortium from 1991 to 2016.