Last April, a blue-and-green electric bus with tiny wheels and space for 12 passengers appeared on the Washington Avenue bridge in Minneapolis. Guided by a remote sensing system, the driverless vehicle shuttled riders back and forth between the University of Minnesota’s East and West Bank campuses during the course of a day. With a maximum speed of 25 miles per hour, the bus was barely faster than many of the bicyclists crossing the span.

But for a handful of U researchers, it was a reminder that the age of autonomous vehicles is racing toward us at top speed—and in many ways, our society and infrastructure are woefully unprepared for its arrival.

Take, for example, our roads, says Tom Fisher, Dayton Hudson Chair in Urban Design and director of the U’s Minnesota Design Center. “We’ve already seen that roads are developing ruts because autonomous vehicles are so precise in their travel patterns,” he says. “That means our current streets won’t work for them.”

Rutted roads are far from the only challenge autonomous vehicles (AVs) could bring. Driverless cars and trucks raise new questions about how we live, travel, work, and connect. Will we own vehicles or share them? How will we ensure that everyone is served by the new AV infrastructure? Who will regulate it? And who will pay for it?

Such questions have brought together a team of researchers led by Zhi-Li Zhang, who holds the endowed Qwest Chair in the U’s College of Science and Engineering (CSE), to search for answers. In October, the U received a three-year $1.75 million Smart and Connected Communities grant from the National Science Foundation (NSF) to study the potential impact on communities. The U’s initiative is one of 13 nationwide to receive the award.

Some companies, like Uber and Waymo (a division of Google), have invested heavily in AV research and have a stake in its development. But Saif Benjaafar, McKnight Distinguished University Professor and ISyE Department Head, says research institutions like the University of Minnesota can provide a more unvarnished and comprehensive perspective on what such technologies mean for our collective future. 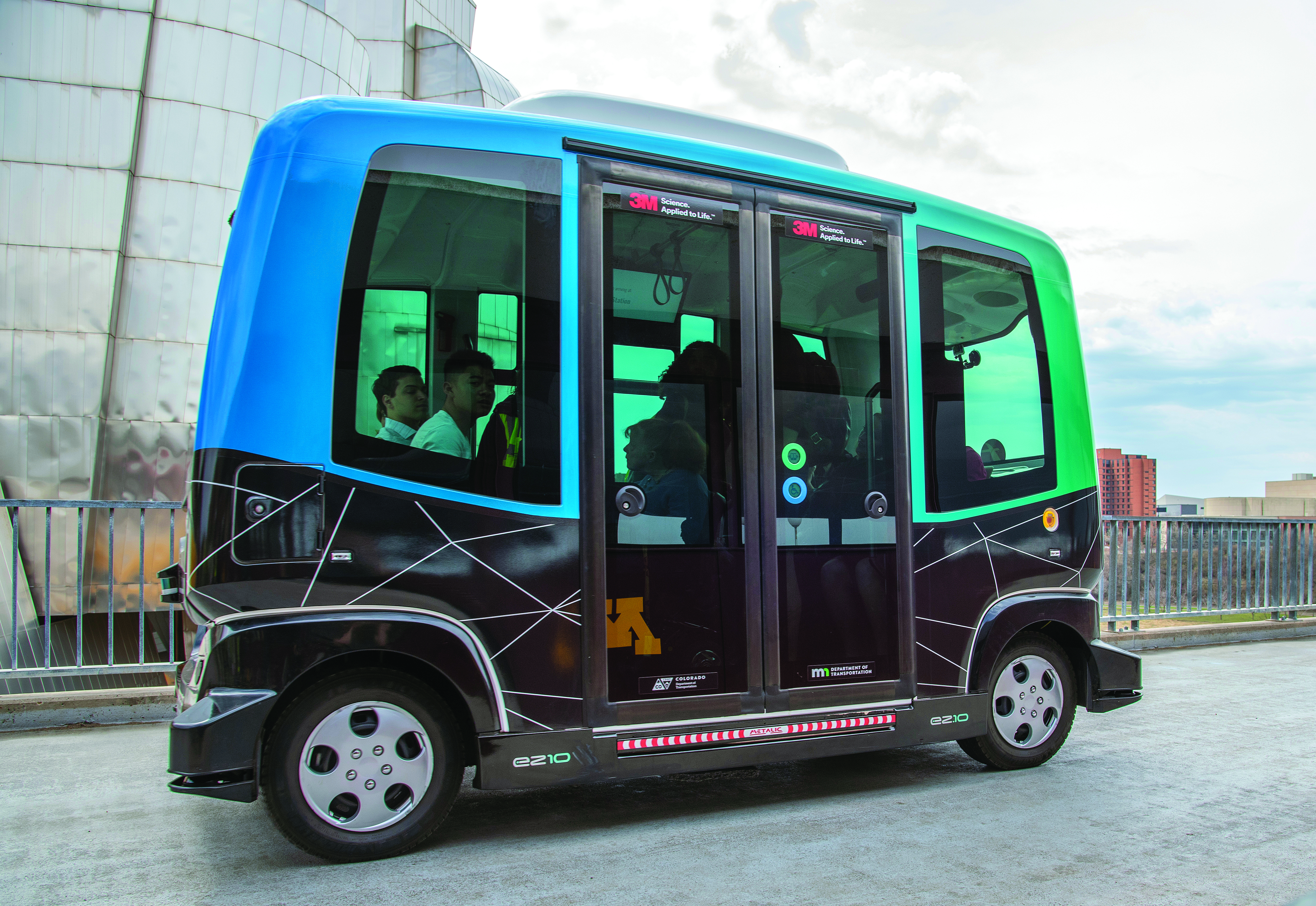 “We don’t have skin in the game,” he says, “so we can be a resource to policymakers and others as they think about the future and how they approach regulation.”

The U comes to the AV study with a long history of finding ways to improve transportation and make it safer. In the late 1950s, U of M researcher James “Crash” Ryan invented the retractable seat belt and other innovations. The U’s Center for Transportation Studies, formed in the late 1980s, is well-known for its studies of transportation-related issues, including AVs. The faculty involved in the AV project, nearly all of whom are supported by endowed chairs that give them the time and latitude to dive into such timely topics, come from the Center for Transportation Studies as well as the College of Design, Humphrey School of Public Affairs, and CSE, bringing a range of perspectives. No one can predict the future, of course, but here are some of the ways these researchers believe AVs will affect individuals and communities:

1. You probably won’t own a vehicle.

“If you mention self-driving cars to most people, they think, ‘Oh great, the next car I buy is going to cost $10,000 more because I’m going to have to pay for the technology,’” says Frank Douma, a research fellow in the Center for Transportation Studies and director of the Humphrey School’s State and Local Policy Program. “In reality, they may not have to buy one at all.”

Benjaafar points to the so-called “sharing economy” as a sign of things to come: For many people in urban areas, using app-based ride services like Uber or Lyft is easier and more economical than owning a car, finding parking, and paying for gas and insurance. As the world transitions to AVs, Douma and others believe it’s more likely that we’ll ride in cars owned by someone else—probably a company like Waymo—and pay per trip or through a subscription service.

2. The cloud will steer your car.

Proponents of AVs say the technology eliminates congestion by replacing human decisions with a centralized control system that determines the most efficient way to get all vehicles to their destinations. Cars wouldn’t have to stop at intersections, and a “smart cloud-based commuter system” (SCCS) would slow or speed each vehicle to prevent crashes.

“These cloud systems have the potential to bring about far-reaching changes,” Zhang says. But if car companies operated independent fleets of vehicles, who would be responsible for ensuring a secure connection to the SCCS? Who would manage the system, have access to AV data, and provide a backup system for safety—the federal government, municipalities, or a private contractor?

Because the technology that controls AVs is so precise, the width of our roads could be reduced, Fisher says. What’s more, a SCCS could direct traffic so efficiently that just one (or two, at most) lanes could accommodate a large volume of vehicles. Fisher imagines that highways will look more like railroad beds, with two hard-surfaced parallel paths supporting the wheels of vehicles. That means more space could be devoted to bike lanes, walking paths, or even gardens.

“Much of the street surface could be pervious,” Fisher says. “It could be green. It could be gravel. Runoff won’t have to go into a storm sewer system and pollution won’t be swept into our rivers.”

Roughly a third of all land in urban areas is used for parking and storing cars. Surface lots, street spaces, parking garages, and even your home garage could be repurposed in a world where a fleet of AVs are in constant circulation. “These cars can go away at night, park themselves outside the city, and then be called back when needed,” Benjaafar says.

Fisher sees an opportunity to replace parking structures with affordable housing—which is increasingly in short supply as the urban population grows. As for home garages, he says homeowners will still need a place for bikes, lawnmowers, and snow shovels.

5. Vehicles will be places for working, sleeping, crafting.

If you don’t have to pay attention to traffic on your ride to work, you’ll be free to do other things. Fisher believes manufacturers will capitalize on that idea, and that we’ll see vehicles designed for particular activities such as delivering groceries. “Mercedes Benz is looking at cars that are also meeting spaces, so instead of driving to your meeting you actually have the meeting in the vehicle,” he says. Happy hour could begin on the way home, in a specially equipped bar car.

6. Your car will run your errands.

Will AVs make us more productive? Imagine a world where AVs deliver your groceries, drop the kids at soccer practice, and pick up your dry cleaning. “When I’m not using it, the car can do other things for me,” Benjaafar says. “It’s going to unleash a lot of hours in the day that we’d otherwise spend driving or sitting in traffic. That could reduce frustration and improve overall well-being.”

7. Everyone will be able to hitch a ride.

AVs offer huge potential benefits to the elderly, disabled people, and others who cannot drive—and easy access to transportation can have a profound impact on their physical health and social well-being, says Yingling Fan, a McKnight Land Grant professor in the Humphrey School and Center for Transportation Studies. “Transportation has direct connection to health,” she says. “It provides access to health care and medical clinics and is central to our basic living needs. It allows us to participate in recreational and social activities, both of which are important for individual health.”

Fan and others worry, however, that without proper incentives or regulation, some communities will be left behind. Policymakers will have to ensure that ride providers don’t serve only affluent communities. They’ll also have to consider the potential impact on rural areas, which may not have enough people to attract ride providers or the funds to build digital and physical infrastructure. Fan believes communities need to create a collective vision for how AVs will work in their locale. “Not all questions can be answered with computer simulation,” she says.

CARRIAGES, CARS, AND BEYOND

The research and analysis generated by the three-year NSF-supported study will guide future leaders and lawmakers as they make decisions about AVs that affect communities and, in fact, entire countries. More specifically, the U of M team would like to develop a handful of simulations that would illustrate how choices regarding AVs might play out.

The College of Design’s Fisher likens the dawn of the AV age to the change that happened a century ago, when motor vehicles replaced horses. “We took one animal out of our transportation system and replaced it with something that was cheaper, safer, and cleaner,” he says. “Now we’re taking another animal out of the system—humans—and getting a solution that’s cheaper, safer, and cleaner.”

Joel Hoekstra is a Minneapolis writer.

What are autonomous vehicles?

Level 1: Has features such as adaptive cruise control and lane-keeping assistance

Level 2: Can assist with acceleration or steering

Level 3: Monitors the road and traffic and lets the driver know when to take control

Researchers from the West Central Research and Outreach Center (WCROC) in Morris, Minnesota, are leading the development of two autonomous farm vehicles—one that will control weeds in pastures and another that will eliminate them from row crops. Both will run on solar power.

The WCROC team, which is part of the U’s College of Food, Agricultural, and Natural Resource Sciences, is working on this project with staff from the U’s Department of Computer Science and Engineering and Department of Bioproducts and Biosystems Engineering, and The Toro Company.

The two vehicles will be field-tested in WCROC’s pastures during the summer of 2020.