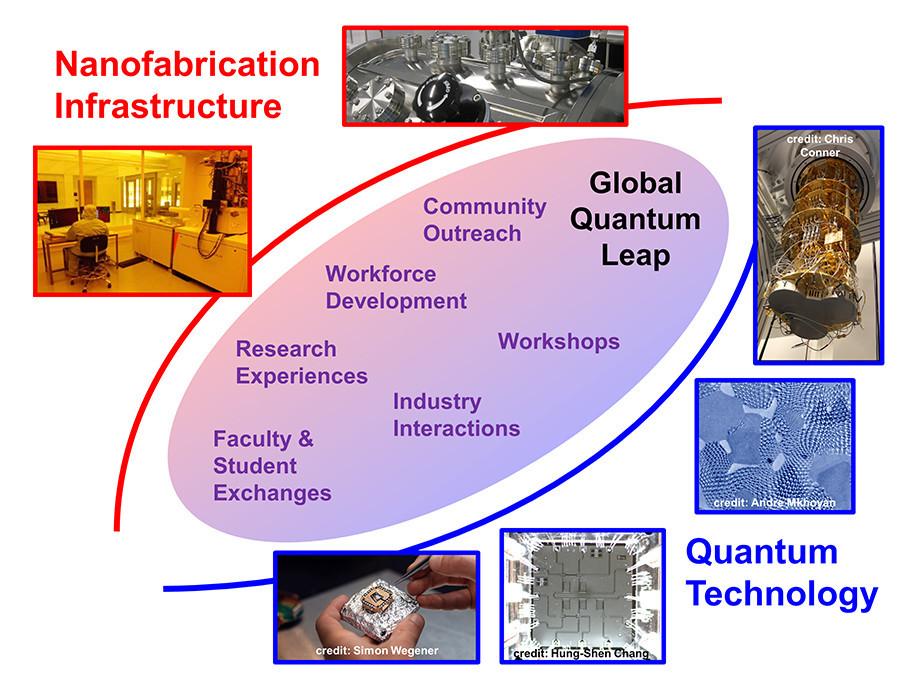 Professor Vlad Pribiag of the School of Physics and Astronomy is one of the principal investigators of a five-year, $2 million grant from the National Science Foundation (NSF) to create an international “network-of-networks” that seeks to accelerate the discovery and development of quantum information systems. Quantum sciences are key to creating the next generation of computing and communications systems.

The project, which is called Global Quantum Leap (GQL), will create a close link between nanofabrication and quantum technology, a connection that so far has been lagging and that will require a worldwide effort. The GQL will bring together key nodes within the NSF-supported National Nanotechnology Coordinated Infrastructure (NNCI) and complementary networks of researchers in the United States and worldwide working on quantum information sciences through workshops, research exchanges, and educational bootcamps.

Pribiag's research applies innovative nanofabrication and low-temperature measurement techniques to uncover the electronic properties of new low-dimensional material systems. This fundamental research is hoped not only to improve knowledge of the physical world, but to also to develop quantum devices with physical properties that could enable future computers.

The network will be led by University of Minnesota Professor Steven Koester, the Louis John Schnell Professor in Electrical and Computer Engineering in the University’s College of Science and Engineering.

“Quantum information technology is going to have a profound effect on society in the coming decades,” Koester said. “The GQL will play a key role in ensuring the infrastructure and workforce are ready for this transition. We are looking forward to working with our international partners in tackling the fundamental changes in nano-manufacturing required to make the quantum revolution a reality.”

Quantum technology has the potential to change society in profound ways by enabling solutions to computational problems inaccessible using conventional methods. However, quantum technology is still in its infancy, and is reflective of the status of semiconductor technology from the early 1960s. A fully mature quantum technology will take decades to realize and will require a coordinated worldwide effort across many disciplines, including physics, chemistry, materials science, electrical engineering and computer science.

The GQL will link together research networks focused on nano-manufacturing and quantum information to advance the scientific knowledge required to make manufacturable quantum technologies a reality. At the same time, the project will also train a new generation of researchers who use global quantum resources. This training will occur through a series of international meetings, workshops, structured and individual research exchanges, educational bootcamps, and industry interactions designed to bridge the existing knowledge gaps.

“I believe this broad support represents an acknowledgement of the importance of quantum technology and the substantial impact that the GQL is poised to make,” Koester said.

The network also includes several international partners including the Nanoplatform Japan (NPJ), the Matter and Light for Quantum Computing (ML4Q) network in Germany, the European OpenSuperQ, and the Chicago Quantum Exchange (CQE), which is based in the U.S. and includes partners in the Netherlands and Australia.

“Even though increasing commercialization tends to build walls in many respects, quantum technology is still a global and major scientific challenge that is best addressed in a cooperative way. I am looking forward to a transatlantic cooperation,” said Dr. Hendrik Bluhm, site representative of ML4Q for RWTH Aachen University and Director of the JARA-Institute for Quantum Information.

By linking these networks, GQL will lay the foundation to develop a globally-aware workforce that can shape future innovations in quantum technology and will fundamentally influence the overall trajectory for quantum manufacturing development. The knowledge exchange facilitated by GQL will also be utilized by the NNCI to inform decisions on new equipment and processes that will aid the academic and industrial quantum community.