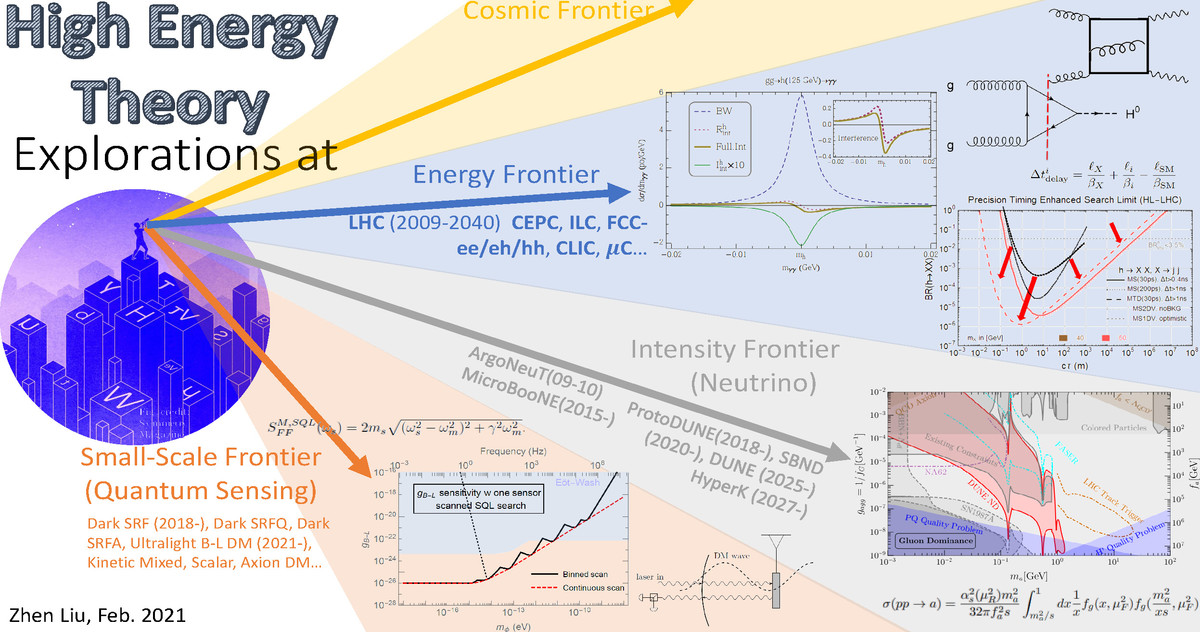 Zhen Liu is a new theoretical high energy physicist at the School. His research focuses on questions about the fundamental structure of the Universe: What is the correct description of particles at the smallest scale? What is the nature of dark matter? How does the electroweak scale emerge to enable our rich life? Why is there such a large variation in sizes or “texture” of particles and their fields?

Liu uses quantum field theory to work on these puzzles. Particles have two types: the matter field (fermions), and the force carrier (Bosons). The matter fields make up matter in the Universe to a large extent. There is a vast variation between these particles--13 orders of magnitude between the masses of the lightest neutrino and the heaviest top quark. And yet, presumably, they all derive their mass from their interaction with the Higgs boson field. “There is no reason so far for these varying textures. They should be close together,” Liu says. “There are so many elegant theories trying to address this problem: Supersymmetry (which predicts a hidden partner for each particle in the standard model) and hidden sector theory (predicts a set of hidden quantum fields). We are trying to find the one chosen by nature and understand it.”

Liu’s group creates proposals for experimentalists to look for new physics in hidden sectors. Among many others, he and his collaborators made a successful proposal to the Compact Muon Solenoid (CMS) experiment at the Large Hadron Collider in Geneva, Switzerland. The group proposed to seek for particles that, once produced, would remain undetectable for a while, travel a certain distance, and then be detected. This disappearance creates a challenge for the experiment to separate them from the background. “We realized these particles travel slower than the standard model background. This new class of signatures, making use of precision timing information accompanied with those signatures, spurred a new class of searches, and, within a year, CMS had an experiment to look for these particles.”

“Our bodies are bound together by strong and weak forces,” Liu says. “Our everyday activities are through force fields that couple to us with an appreciable strength, such as electromagnetism. Beyond what we can see, there is part of nature that doesn’t interact with us strongly. The associated particles  go unnoticed. Billions of neutrinos that pass through us every second, cosmic muons-- hundreds every minute, interact so weakly that we don’t notice. We postulate that beyond our luminous matter, nature must have a vibrant structure at the microscopic level. How do we find it?” Liu says that with quantum mechanics, anything which can interact, will interact. They will interact with us very weakly. Liu’s purpose is to design new ways to measure those interactions that are hidden and therefore understand nature.

Some of these particles will be dark matter candidates. The challenge is for physicists to find them and put them in a self-consistent theoretical framework to deepen our understanding of fundamental questions of our Universe.