Channel belts are wide corridors created by the movement of a river over time, as shown by geologic indicators such as abandoned channels and eroded valley margins. Channel belts paint a picture of past landscape dynamics, and over geologic timescales are transformed into important aquifers and foundational elements of the sedimentary record. Yet our ability to interpret channel belts is relatively limited when those features are created by braided rivers.

Experiments were conducted by former Research Associate Ajay Limaye in the SAFL main channel, a 37 m long and 2.7 m wide flume fed with water diverted from the Mississippi River. The large size of the main channel, repurposed as a basin for studying landscape evolution, played an important role in the experiment; the main channel is 200 times longer and 9 times wider than the largest initial trench cut for the experiment. This size reduced boundary effects, by allowing for free lateral motion of channels, and provided a baseline to measure downstream variability in channel belt width.

An initially straight channel was cut down the center of the basin. Water and sediment were fed into the channel at a constant rate. Channel belt topography was scanned using the SAFL data collection carriage, and photographs were taken as the channel belt evolved. Experiments were run until the channel belt reached the basin walls or until the rate of geomorphic change slowed substantially. 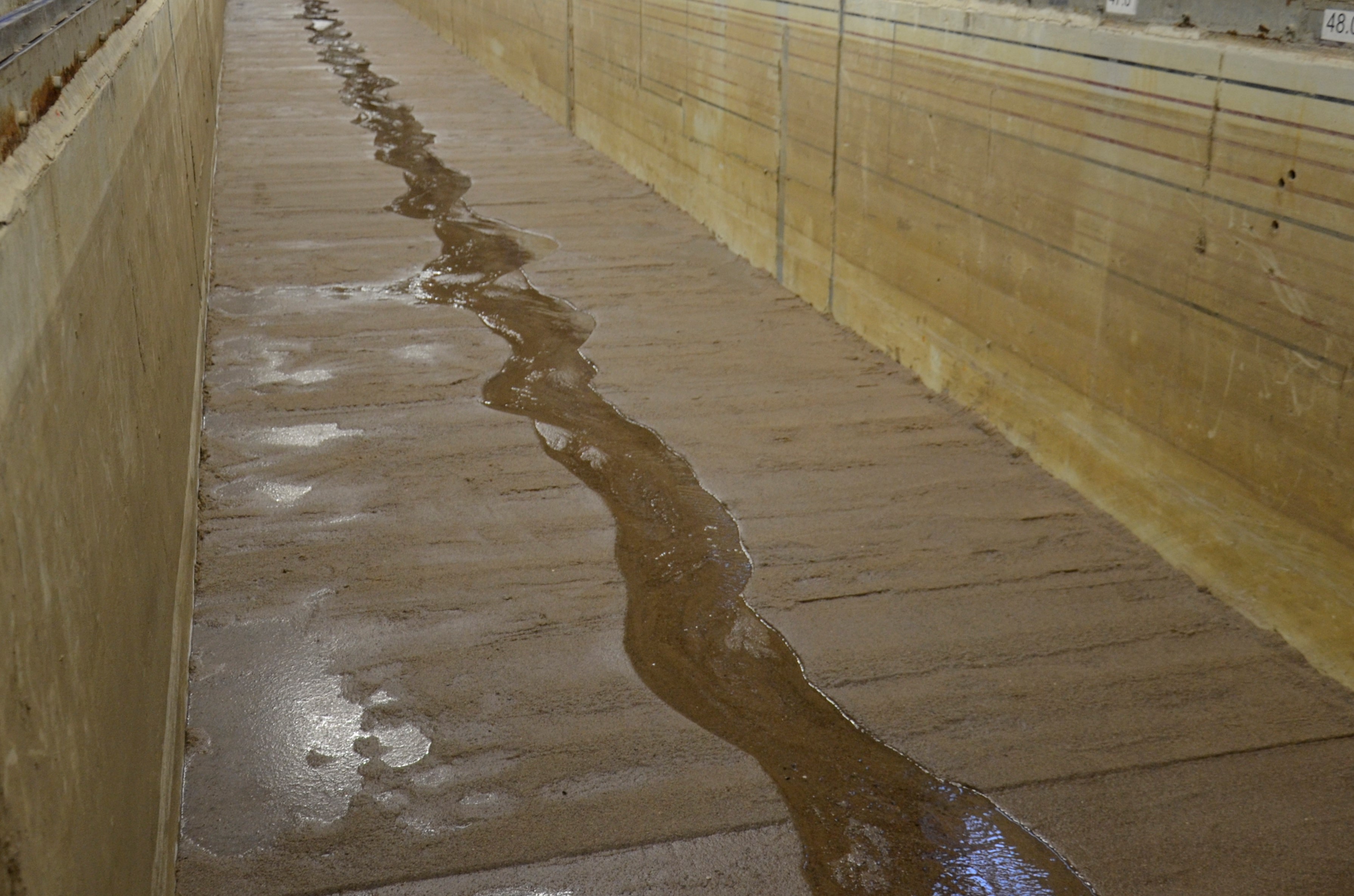 The results of this project established quantitatively the controls on channel belt growth for this common, idealized case. Cast in a new dimensionless framework that reconciled differences in discharge, bed slope, sediment grain size, and time, the experimental results showed that channel belts follow a consistent evolutionary trajectory.

The growth rate of the channel belt showed three distinct phases marked by (1) growth of meanders; (2) braiding, with logarithmic channel belt growth; and (3) mature braiding, with slower growth. Systematic analysis of topography data further showed that the maturity phase coincided with a decrease in boundary shear stress to near the threshold for sediment transport.

In comparison, analysis of the database of natural channel belts showed that discharge is the dominant predictor of channel belt width for natural cases. These results suggest several practical considerations for interpreting ancient fluvial deposits and subsurface aquifers, including quantitative estimates for the variability in the width of channel sand bodies.

In continuing work, researchers are looking to further reconcile the dynamics of rivers in the laboratory, natural landscapes, and the geologic record.

Want to know more about this project? Contact Ajay B. Limaye at ajay@virginia.edu