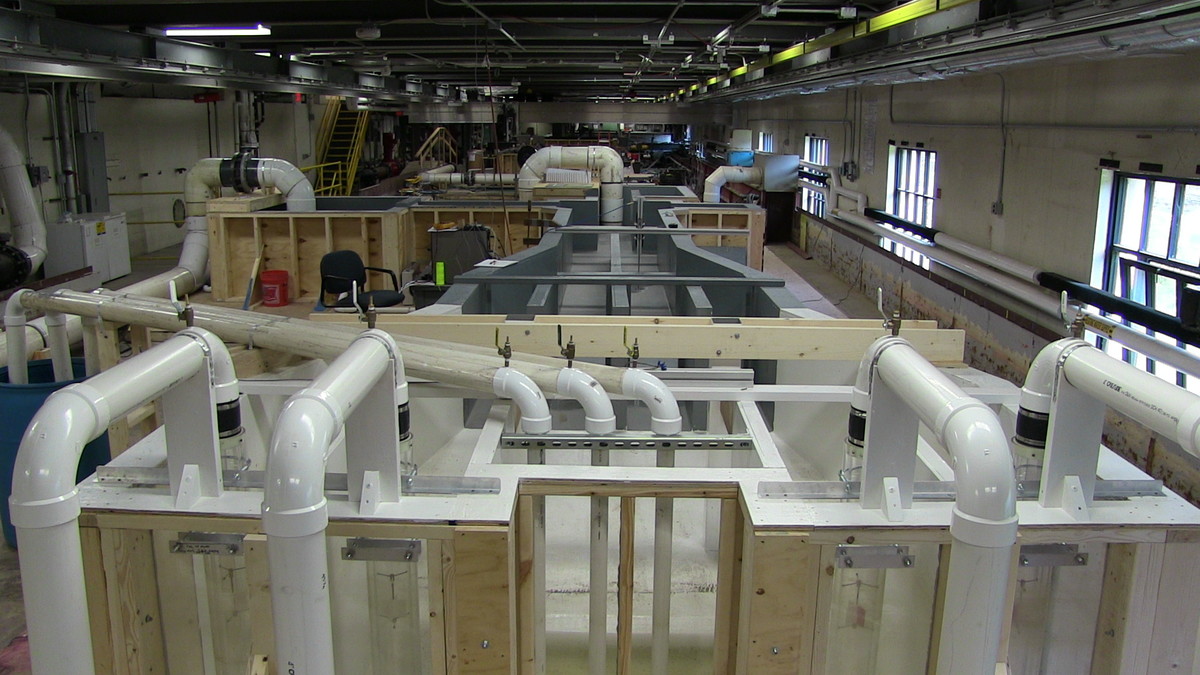 After a 2011 flood caused extensive damage in Minot, North Dakota, MWH Americas, Inc. was hired to design a pumping station as part of the Mouse River Enhanced Flood Protection Plan, to pump stormwater over the river levee during flood events. The applied engineering team at the St. Anthony Falls Laboratory was then tasked to build a physical model of the proposed pumping station to identify and mitigate unanticipated/unacceptable flow patterns prior to construction. Specifically, researchers were to evaluate hydraulic conditions leading to excessive wear and tear on pumping equipment. These adverse conditions include swirl angle, vortexing, and uneven approach velocities.

SAFL engineers built an 1:7 scaled undistorted geometric representation of the pump station. Froude similarity was used to scale the flow; Froude similarity ensures that the ratio of inertial (velocity) and gravitational forces in the model is the same as in full scale. The model was constructed on the SAFL model floor to an accuracy of ⅛ inch. Engineers used a SAFL data carriage laser to precisely verify model wall vertices after construction. The model was also built with some clear pipe and wall sections for better viewing flow at the pump intakes.

The model experiments showed that the pump station would operate acceptably in most scenarios. The following cases of lower performance were observed: occasional reverse flow out of the center bay, infrequent excessive pipe swirl angle at intake 6, and occasional rotational flow in the pumping chamber reservoir due to velocity differences entering the chamber.

The SAFL modeling team put together a list of recommendations for modifying the proposed design and operations based on data collected from the experimental runs; recommendations included modifying confluence chamber upstream of pumping reservoir, changing the pumping sequence, and maintaining channel operation.

Physical model reporting to MWH completes University of Minnesota’s contribution to this particular project, however, similar modeling projects could be completed at SAFL in the future.

Want to know more about this project? Contact Matthew Leuker at luek0004@umn.edu

This project commenced in spring 2016 and was completed in fall 2016.