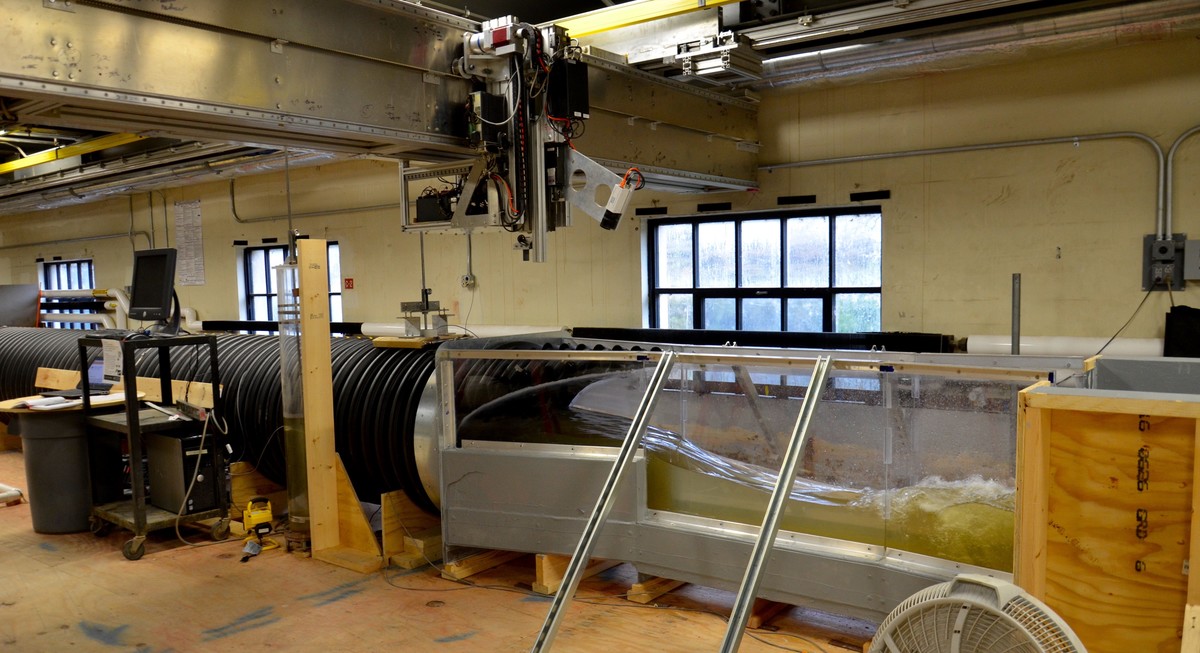 Venturi flumes are a type of hydraulic structure commonly used to measure flow rate in open channels and gravity-fed pipes. These flumes are designed to create a predictable relationship between flow rate and water level (the rating curve), so that the flow rate can be monitored simply by measuring the water level in the flume. Long-throated flumes (LTFs) are a notable flume class where the flow forms nearly parallel lines due to the length of the flume. The benefit of a LTF is that the rating curve can be predicted using analytical equations, so that experimental measurement of the rating curve is not required. LTFs have been used extensively in measuring irrigation flows worldwide, but to date have seen little documented use in sanitary sewers. Round-bottomed LTFs, or U-flumes, are particularly well suited for metering flow in circular, gravity-fed pipes such as sanitary sewer pipes.

U-flumes are one of many custom long-throated flumes that can be designed using WinFlume, a software package created and supported by the U.S. Bureau of Reclamation.. The primary goal of this project, sponsored by the Metropolitan Council Environmental Services (MCES), was to validate the accuracy of the Winflume software specifically for U-flumes. The ability to use an established, off the shelf software package for flume design would be invaluable for streamlining the design process and allowing flumes to be custom designed for each application.

In the initial project phase, a 1:2 physical model of a U-flume design was built at the St. Anthony Falls Laboratory (SAFL) on the model floor. It was laid out using SAFL’s overhead data carriage system, which is capable of 3-dimensional positioning with a resolution of 1 mm. The flume throat and contraction and expansion sections were fabricated from high-density foam coated with epoxy to achieve the specific curved geometry. The top was left open to allow water surface scans using the overhead data carriage. To generate an experimental rating curve for the flume, a series of ten different flow rates were run through the U-flume model. Orifice plates and weigh tanks were used to measure each flow and water level with an accuracy of 1%. The water level downstream of the flume was also varied at each flow rate, to assess the ability of the flume to handle backwatering.

Simultaneously, researchers ran a high-fidelity 3D computational fluid dynamics (CFD) analysis. Simulations were initially run using SAFL VSL3D software, and later Ansys FLUENT was adopted for this project. The CFD software was first used to model the 1:2 scale physical model, to verify the ability of the CFD software to reproduce the experimental rating curve of U-flumes. The CFD software was then used to model the effect of non-ideal upstream and downstream conditions on U-flume rating curves for several U-flume installations.

Rating curves (water level vs. flow rate) were determined using the physical and CFD models. Researchers compared the physical model rating curves to rating curves predicted by the WinFlume model and the CFD model. Preliminary results suggest that WinFlume predicts the rating curves of U-flumes within the advertised accuracy (about 3%) along with operational limits and associated uncertainties. Furthermore, CFD modeling accurately represented the flow dynamics of the flume, and will continue to be a useful tool for analyzing metering flumes with non-ideal upstream and downstream flow conditions.

This project commenced in summer 2016 and will be completed fall 2020.

A final report for this project will be made available Fall 2020.