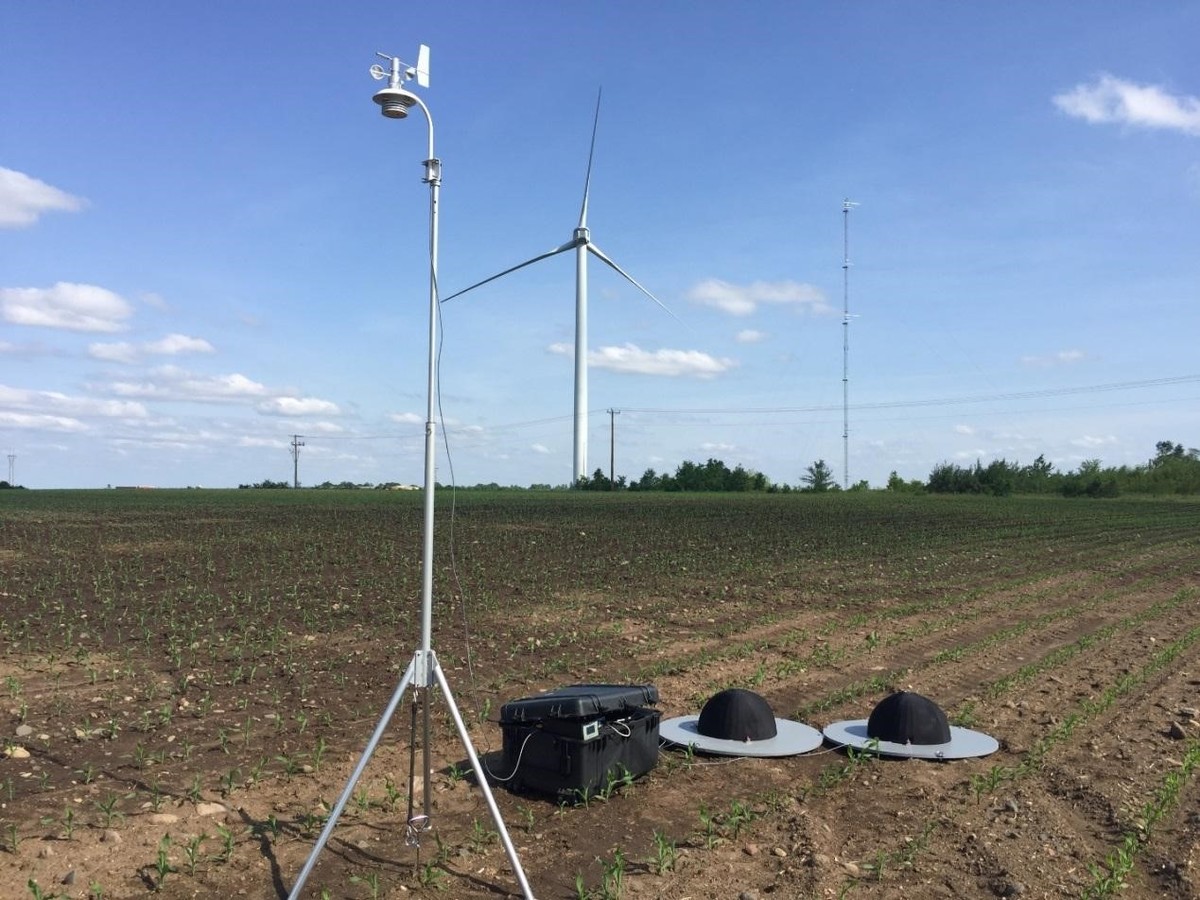 As the wind energy sector grows, environmental impacts and public perception become increasingly important. One common public concern about wind energy farms is wind turbine-generated noise, particularly, public health impacts and annoyance from turbine-generated infrasound and amplitude modulation. Amplitude modulation (AM) is the cyclic variation of sound level of audible noise; AM noise has been described as “swishing” or “thumping” and can be particularly annoying, even at relatively low sound levels. Infrasound is sound in the frequency range below 20 Hz, generally considered outside of normal human hearing range, however, it can be perceived at very high noise levels. Concerns about infrasound noise include negative health impacts such as sleep disturbance, headaches, nausea, tinnitus, ear pressure, vertigo, and other symptoms.

Field measurements of wind turbine noise were recorded at the University of Minnesota’s Eolos turbine. Researchers took data from June 7 to June 19, 2012 using a 36 audible microphone directional array at a distance 102 m from the turbine and a cluster of 3 infrasound microphones. Data was taken during normal turbine operation, while the nacelle cooling fans were on and off, and while the turbine was off.  At this distance, noise measurements are commonly referred to as “near-field” and would not be typical in residential areas.

Laboratory human response testing was conducted at the Center for Applied and Translational Sensory Science (CATSS) lab at the University of Minnesota. In a blind test, 71 adult subjects were exposed to unknown stimuli, while standing on a force plate to measure posture stability. Researchers exposed subjects to audible and infrasound reproduced wind turbine noise for approximately 15 minutes, as required for postural sway measurements.

Researchers found that infrasound and amplitude modulation did not cause symptoms for the healthy population over the 15 minute test duration, and infrasound did not cause illness or symptoms at the levels presented. When post-exposure symptoms occurred, they were mild symptoms, mostly discomfort, fatigue, and head or ear fullness. A control group was used to show fatigue was related to the length of the testing and not wind turbine noise, as this group was not subjected to any wind turbine noise stimuli. Infrasound stimuli used in the testing was played at noise levels 40-50 dB higher than what was recorded in the field, which likely explains the minor symptoms of head or ear fullness.

Overall, literature suggests that non-acoustic factors play a larger role in public annoyance regarding wind turbine noise. Other factors could include visual appeal, the permitting process, construction, and monetary factors.

Future work would include testing patients who may be more susceptible to infrasound effects. In addition, electrophysiological testing may be utilized in future work to directly measure auditory system response.

Want to know more about this project? Contact Chris Feist at feist020@umn.edu

This project commenced in Summer 2016 and was completed in Fall 2019.