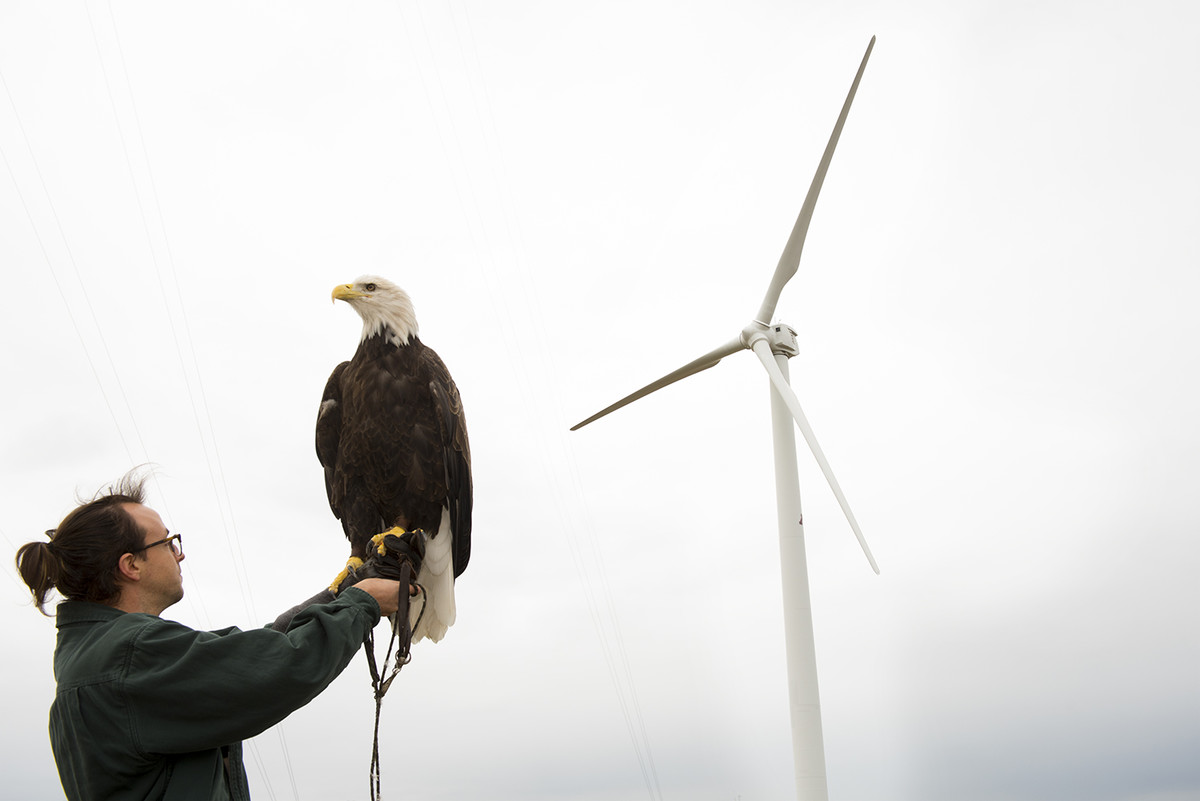 Detection and Perception of Sound by Eagles and Surrogate Raptors

As the wind energy sector grows, new challenges arise regarding impacts to the environment surrounding wind farms. One such issue is raptor collisions with wind turbines. The purpose of this study was to gather data on the hearing range and auditory performance of eagles and hawks. These data will be useful in developing an acoustic deterrent system to warn raptors away from operating wind turbines.

In Phase I, SAFL researchers and engineers worked with researchers in the fields of biology, veterinary medicine, auditory physiology, and psychoacoustics from the University of Minnesota Raptor Center, the Department of Speech-Language-Hearing Science, and the VA Loma Linda Healthcare System. Together, this research coalition tested hearing in various raptor types.  Red-tailed hawks and bald eagles were tested at the University of Minnesota’s Multi-Sensory Perception Laboratory.  The birds were sedated and fitted with subdermal needle electrodes to monitor responses to a range of sound levels and frequencies. Bird health was monitored continually during the process.

To test golden eagles, the team traveled to Oklahoma to visit Sia, The Comanche Nation Ethno-Ornithological Initiative. Given the lack of testing facilities at this location, SAFL engineers needed to build a portable auditory response laboratory. The Mobile Evoked Auditory Response Lab (MEARL) includes a sound attenuating chamber and a magnetic speaker to play stimuli to enclosed, sedated birds.

Phases II and III of the project took place at the University of Minnesota Raptor Center. During Phase II, researchers recorded vocalizations from male and female bald and golden eagles of various ages, in the raptor center pen areas and clinic. The collected sounds were then organized into the following broad categories: cackles, chirps, screams, squeals, and grunts.

These data were incorporated into Phase III, which took place in an acoustically dampened room with a perch in the center and speakers on either side. Natural and synthetic sounds were played for each bald eagle individually and their reactions were recorded on video. Sounds included pure tone, AM, FM, AM complex, FM complex, several recorded eagle sounds, mobbing crows, and white noise. Reviewers were given footage of the eagles where the stimuli was replaced with a generic beep. For each trial, reviewers were tasked with determining whether the bird responded, how the bird responded, and the level of response.

During Phase II, researchers collected and analyzed 362 bald eagle calls, which were used to generate a data set for Phase III testing. Phase III results showed that eagles primarily responded to stimuli by turning their head in the direction of the noise. The eagles were more responsive to natural stimuli in comparison to synthetic stimuli, and more responsive to wideband stimuli in comparison to narrowband stimuli.

Future steps in this project would involve further development of potential acoustic deterrents coupled with additional behavioral testing. Researchers are proposing flighted behavioral response experiments where bald eagles are allowed to fly approximately 100 yards with a tether. During these flighted tests, acoustic deterrents would be played on either side of the flight path allowing researchers to determine if eagles will alter their flight path after hearing a deterrent.

Want to know more about this project? Contact Chris Feist at feist020@umn.edu

This project commenced in June 2017 and was completed in October 2018.

Auditory performance in bald eagles and red-tailed hawks: a comparative study of hearing in diurnal raptors