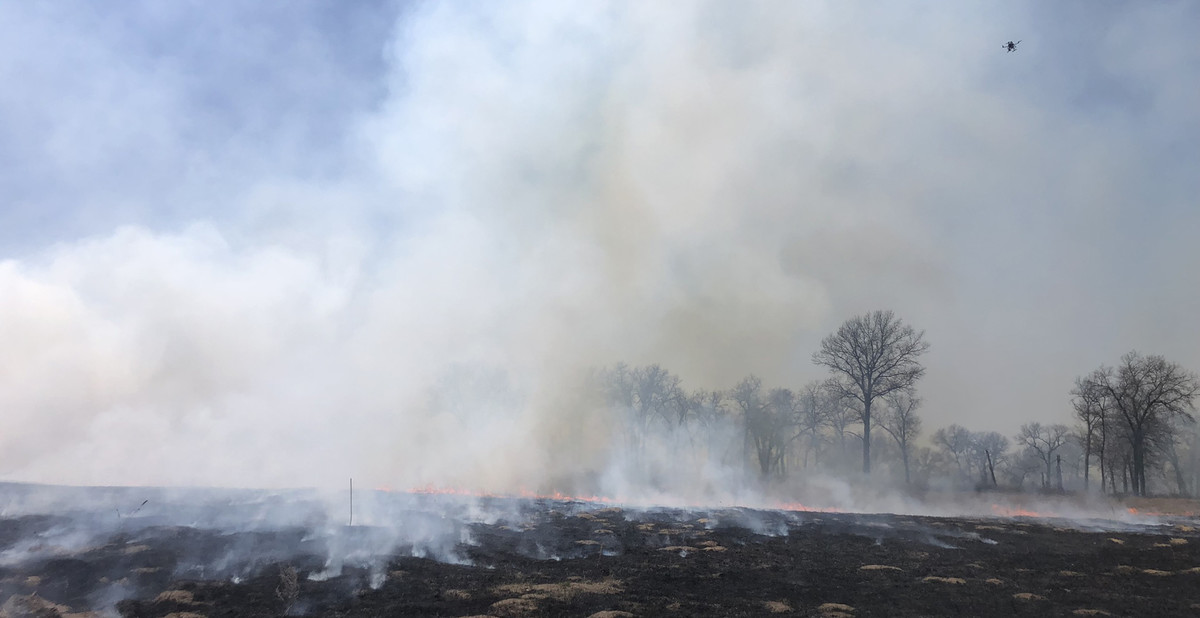 On a blustery day in late April, St. Anthony Falls Laboratory’s postdoctoral researcher Nate Bristow piloted a drone towards a thick plume of smoke. Nearby, a prescribed fire crew continued with their burn, setting alight the prairie and now-rare oak savannah of the Cedar Creek Ecosystem Science Reserve, a field station under the University’s College of Biological Sciences. With a prescribed burn program dating back to the 1960s, Cedar Creek is home to one of the longest ongoing scientific fire experiments in the world. Here, researchers study the impact of fire on the reserve’s fire-dependent ecosystems. Now, faculty and researchers at SAFL are expanding the potential of these burns as they use the prescribed fires to further develop research tools for measuring how small particles like wildfire soot are transported in the atmosphere.

“We’re focused on leveraging rapidly developing drone automation technology and machine learning techniques alongside our lab’s holographic imaging methods,” Bristow says of the project. “By bringing these tools together, we can use drones as a platform to investigate flow processes and particle transport in the atmosphere at a fairly low cost, while automating the measurement process and achieving particle diagnostics not possible with other technologies.”

Standing just outside the burn area, Bristow flew the drone – affectionately nicknamed Betty – on a series of test flights through heavy smoke. Laden with a camera, digital inline holographic (DIH) particle sensor and a small computer which acts as its brain, this specialized drone is being developed as part of the Grand Atmospheric-scale Imagining Apparatus (GAIA) project, led by SAFL’s Professor Jiarong Hong (Department of Mechanical Engineering), with SAFL’s Associate Director of Research Michele Guala (Department of Civil, Environmental and Geo- Engineering) as co-PI.

As Professor Hong explains, “In a nutshell, we are developing a flying microscope by combining drone and holography technology together. This microscope can direct image suspended microparticles in the air without us collecting samples and putting them on a glass slide under a conventional microscope in the lab. With further integration of AI, we expect our flying microscope can autonomously classify and track these suspended microparticles dispersing in the atmosphere over a long distance, revealing the full dynamics of pollutant transport in a real environment.”

While Bristow previously tested the drone’s capabilities with the aid of smoke grenades, this was Betty’s first flight into smoke generated by an actual burn – a real-world scenario which serves as an important step as Bristow works to automate several key processes carried out by the drone. Eventually, Bristow’s goal is to have the drone identify smoke, fly to its source and then trace the smoke’s path, with the drone sampling particles during every stage of its journey. With this technology, Bristow and the GAIA team hope that researchers will be able gain unique measurements which can’t be captured by other sensors.

“Gaining a better understanding of how aerosol particles are dispersed downwind from wildfire smoke has potentially big implications for public health,” Bristow explained. “Aerosols from wildfires also influence radiative forcing, which impacts how the atmosphere is trapping heat. As we are better able to measure and characterize the morphology of these aerosols during transport, including how they may aggregate together and change in size, we can work towards developing predictive models that more accurately incorporate the feedbacks of these particles on the climate.”

With the assistance of Cedar Creek’s prescribed burn program, Bristow and the GAIA team are excited to continue to develop Betty-the-drone. According to Professor Hong, “The technology we're developing can be scaled up to a swarm of drones that can communicate with each other intelligently and work collectively to obtain spatial and temporal mappings of microparticles in the atmosphere. We expect Betty-the-drone will play a role in many applications beyond measuring particles generated from a forest fire, such as early detection of spore-transmitted disease in agriculture, air quality monitoring in indoor and outdoor spaces, and characterization of snow settling and sand transport during severe weather events.”

For more information about the GAIA project, visit jiaronghonglab.com.