Doctoral candidates Duarte Pereira de Sousa, Neel Chatterrjee, and Xinwei Zhang are among the recipients of the 2022-23 doctoral dissertation fellowship awarded by the University of Minnesota Graduate School. The fellowship gives the University's most accomplished doctoral candidates an opportunity to devote full-time effort to an outstanding research project by providing time to finalize and write a dissertation during the fellowship year. 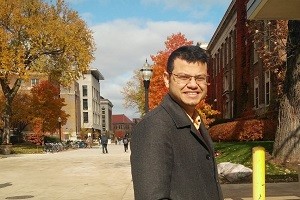 Having earned his undergraduate degree in electronics and communication engineering in India, Chatterjee arrived at the University of Minnesota Twin Cities in 2017 eager to pursue research on the use of low-cost solution-processed liquid inks to produce thin-film transistors which are the building blocks of display and wearable electronics. These low-cost liquid inks need high-temperature processing to function as semiconductors. However, producing these low-cost thin-film transistors on plastic substrates poses a problem as plastics melt at high temperatures. Chatterjee’s research addresses the issue by using a novel method called photonic curing to enable low-temperature processing on plastic. Photonic curing involves the flashing of white light on the thin-film transistor device stack very rapidly, which results in only the top layer being heated, while leaving the plastic at substantially lower temperatures. The method enables fabricating functional layers of devices on flexible plastic substrates without damaging them.

Neel Chatterjee is working on his doctoral research under the guidance of Professor Sarah Swisher and Professor Emeritus P. Paul Ruden. His interests lie in fabricating, characterizing, and understanding charge transport in thin-film transistors. An experimentalist and a theorist, Chatterjee splits his time between the cleanroom and writing simulation code.

Chatterjee has interned twice at Intel Corp. in the device reliability groups where he used machine learning to model the long-term use behavior of transistors used in computer chips. He has previously received the IEEE Electron Devices Master's student fellowship. 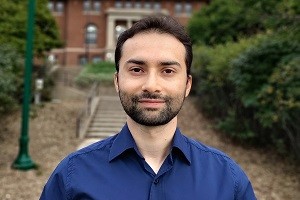 His theoretical discovery of gigantic tunneling magnetoresistance and spin transfer torque in magnetic Weyl semimetals (MWS) is one of his most significant research contributions to the area. By exploiting the unique property of magnetization-chirality locking in MWS, he has shown that tunneling magnetoresistance in an MWS-oxide-MWS structure can far exceed those reported in state-of-the-art Fe-MgO-Fe devices. In addition, the surface states in MWS can also lead to an anomalously large and energy efficient spin transfer torque. In his dissertation, de Sousa mainly focuses on exploiting the quantum transport of unique spin states in novel quantum materials that would have useful applications in magnetic-based memory devices. de Sousa is working under the guidance of Palmberg Professor Tony Low.

Originally from Brazil, de Sousa earned his bachelor’s, master’s and doctoral degrees in Physics from the Federal University of Ceará in Fortaleza-Ce, Brazil. A chance meeting with Professor Tony Low, whose work de Sousa closely followed, resulted in an invitation to come to the University. In 2018, he joined ECE as a PhD student. 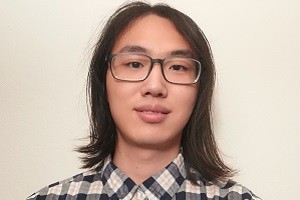 Zhang’s dissertation research focuses on harnessing the power of distributed systems towards a connected world. It is estimated that by 2030, there will be more than 125 billion interconnected smart devices, creating a massive network of intelligent appliances, cars, gadgets, and tools. These devices collect a vast amount of real-time data, perform complex computational tasks, and provide vital services which significantly improve our lives. Unlike traditional centralized systems, distributed systems have the potential to realize scalable processing, real-time intelligence, and ultimately contribute to the vision of a smart and connected world.

Working under the guidance of Professors Mingyi Hong and Sairaj Dhople, Zhang focuses on resolving several fundamental theoretical questions regarding distributed systems and algorithms, and developing a theoretical framework to securely and efficiently utilize interconnected smart devices to build faster, smarter, and more economical systems. Titled “A Framework for Distributed Optimization with Performance and Privacy Guarantee,” the overarching goal of his dissertation is to provide a framework to model distributed systems and unify distributed algorithms. He hopes that such a framework will help researchers and practitioners understand algorithm behavior, predict algorithm performance, and provide guidelines for designing application-specific efficient and secure algorithms to utilize resources in the distributed system.

Learn more about our graduate programs

Know more about our research areas