The bedrock geologic record of Minnesota extends from the middle part of the Archean Eon to the latter part of Cretaceous time—roughly 3.5 billion years ago to about 72 million years ago!

Minnesota's bedrock geologic record, while vast, is disrupted by several prolonged gaps of time, called unconformities. An unconformity is a gap in the geologic record when either no rocks formed or when rocks that formed during an earlier time were later eroded away.

Figure 1 shows a representation of geologic time, from the formation of the Earth at about 4.6 billion years ago to the present day. Geologists split this record of time into several intervals to make it easier to study geologic events and units. The areas shaded in gray portray the age of the major bedrock units found in Minnesota, while the white areas represent unconformities, the time intervals missing from Minnesota's geologic record.

Only a small percentage of geologic time is preserved in the bedrock geology of Minnesota.

What do the cliffs along the North Shore of Lake Superior, the smooth outcrops in the Boundary Waters Canoe Area Wilderness, the immense iron mines on the Mesabi Iron Range, and the knobby outcrops within the Minnesota River valley have in common? They are part of the very old bedrock that underlies all of Minnesota.

Minnesota is situated at the southern edge of the Canadian Shield—the nucleus of the continent of North America that formed during Precambrian time. This period of time encompasses about 85% of Earth's history. Geologists consider Precambrian time to have begun with the formation of planet Earth about 4,550 million years (Ma) ago and to have ended about 541 Ma, when organisms with hard parts, such as shells, rapidly diversified. The rocks formed in Minnesota during this enormous span of time record a complicated geologic history that involved volcanoes, ocean islands, mountain chains, earthquakes, and unstable geologic conditions that were very different from the Minnesota of today. Precambrian Minnesota resembled modern-day Indonesia for a while; later, it resembled modern-day California; and still later it resembled parts of the Middle East and eastern Africa.

The mountains and other features of the various Precambrian landscapes were slowly eroded to low relief over many millions of years. Most of the Precambrian rocks now exposed in Minnesota's flat terrain originally were much deeper in the Earth; they record processes and conditions that existed beneath landscapes long since removed by erosion. Geologists can reconstruct the conditions that existed within the ancient Precambrian crust of the Earth through studies of these formerly deep-seated rocks now exposed at the surface. Presently, these deeply eroded Precambrian rocks are mostly covered by younger sedimentary rocks, or by a thick blanket of glacially-deposited clay, silt, sand, and gravel. However, they do appear at the surface in places in northeastern, east-central, and southwestern Minnesota.

Collectively, Precambrian rocks of Minnesota encompass metamorphic, igneous, and sedimentary rocks. Examples include gneiss, greenstone, granite, graywacke, iron formation, schist, basalt, gabbro, and anorthosite. Some of the oldest rocks in the world (up to 3.5 billion years old!) can be found in the Precambrian rocks of the Minnesota River valley.

Imagine a sandy, tropical seashore extending across southern Minnesota—part of a vast, shallow sea that covers much of North America. The sandstone, shale, and limestone rock layers exposed across much of southeast Minnesota are a geologic record of such conditions that existed hundreds of millions of years ago, during the early Paleozoic Era.

Although many people are not aware of the geologic history of the Paleozoic bedrock in Minnesota, the rocks are familiar to anyone who has visited southeastern Minnesota. The bluffs along the St. Croix, Minnesota, and Mississippi rivers, and their tributaries, are composed of layers of Paleozoic-aged rock such as the St. Peter Sandstone and the Prairie du Chien Group. Paleozoic rocks lie beneath glacial deposits across much of southeast Minnesota, from as far north as Taylors Falls, southwest to Mankato. They extend south into Iowa and east into Wisconsin. Where present, the Paleozoic rock units are noted for being significant reservoirs for groundwater in Minnesota.

Paleozoic rock layers are sedimentary in origin. They are composed of particles of pre-existing rocks or minerals, or are precipitated by biological or chemical processes. Sedimentary rocks are deposited by the accumulation of these particles into layers, or beds. Small grains are dropped by wind or settle in water to form sandstone and shale. Elements, such as calcium, magnesium, carbon, and oxygen precipitate from seawater or are left as biological remains, such as shells, to form what we call calcareous, or carbonate sediments and later rocks—either calcium-rich limestone largely consisting of the mineral calcite, or more magnesium-rich dolostone largely consisting of the mineral dolomite—with much of the magnesium commonly added later by percolating water.

Different rocks reflect the environmental conditions present at the time the original sediments were deposited. For example, where sand was scarce, carbonate minerals, chemically precipitated from seawater, and carbonate shells of marine organisms, accumulated to form limestone.

If you visit the river bluffs in southeastern Minnesota, take note of the varied rock formations. Remember that these rocks record what the world was like hundreds of millions of years ago when a shallow tropical sea existed right here in Minnesota and across much of central North America.

The poorly understood Jurassic rocks are known only from drill core samples in the far northwestern corner of the state. They include shale, limestone, dolostone, sandstone and siltstone possibly deposited within streams, lakes, and other marginal-marine environments as a sea slowly advanced eastward over much of North Dakota and other western states.

The Cretaceous rocks form a nearly continuous blanket covering the Paleozoic and Precambrian rocks throughout the western half of Minnesota and numerous, small outliers in the eastern half of the state. These rocks consist primarily of weathered residuum and overlying sedimentary rocks of conglomerate, sandstone, mudstone, shale, marl, and minor limestone. The residuum, a soil and subsoil product formed as a result of the chemical weathering of bedrock, spans both the western and eastern half of the state. It developed during a long period of weathering and erosion from sometime after the Middle Devonian (roughly 370 million years ago) to the Late Cretaceous (roughly 100 million years ago), after which the overlying sedimentary rocks were deposited.

The Cretaceous sedimentary rocks formed within a transitional marine and nonmarine environment along the eastern shoreline of a large inland sea, known as the Western Interior Seaway, that once split North America into two landmasses. Fossilized shark teeth, snails, clams, ammonites, fish bones, and even crocodile parts are known from the marine and marginal-marine deposits in southwestern and northeastern Minnesota, while fossilized leaf impressions and pollen have been identified in some of the nonmarine deposits in the southeast. 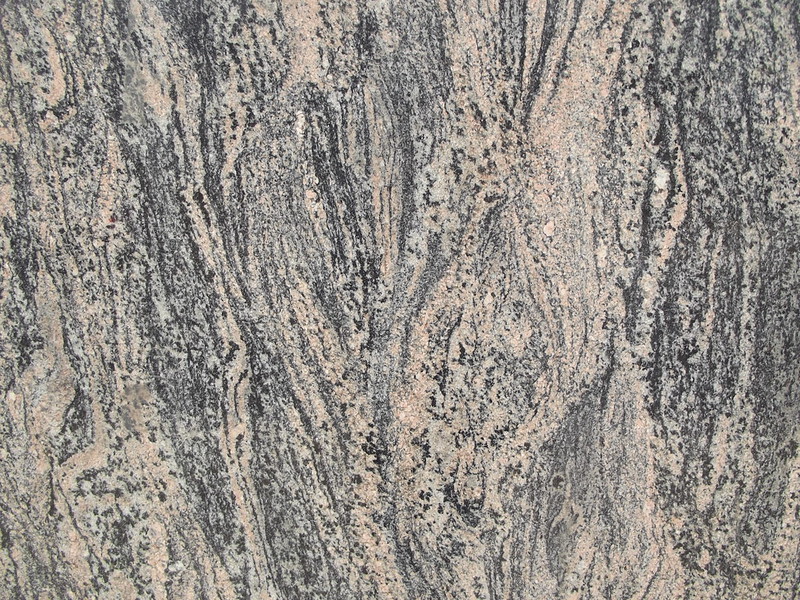 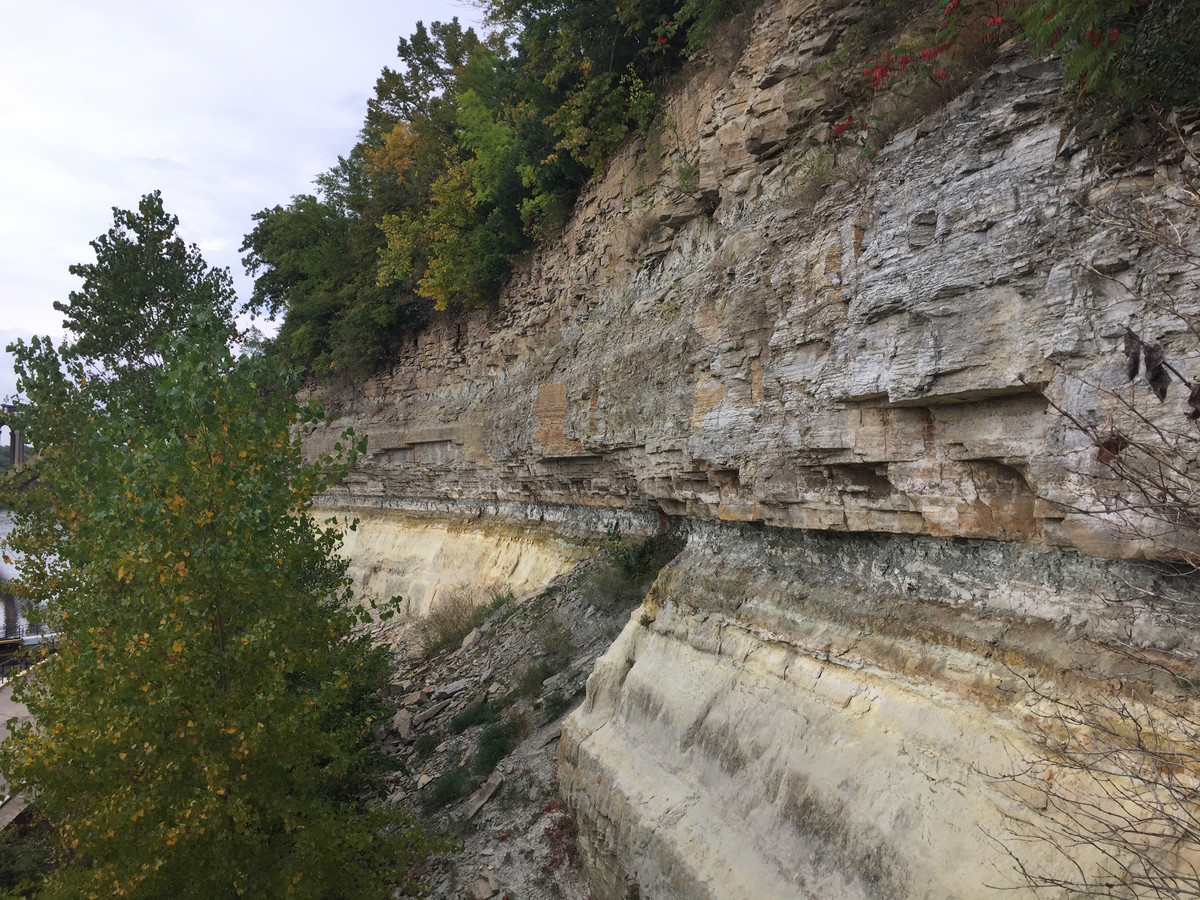 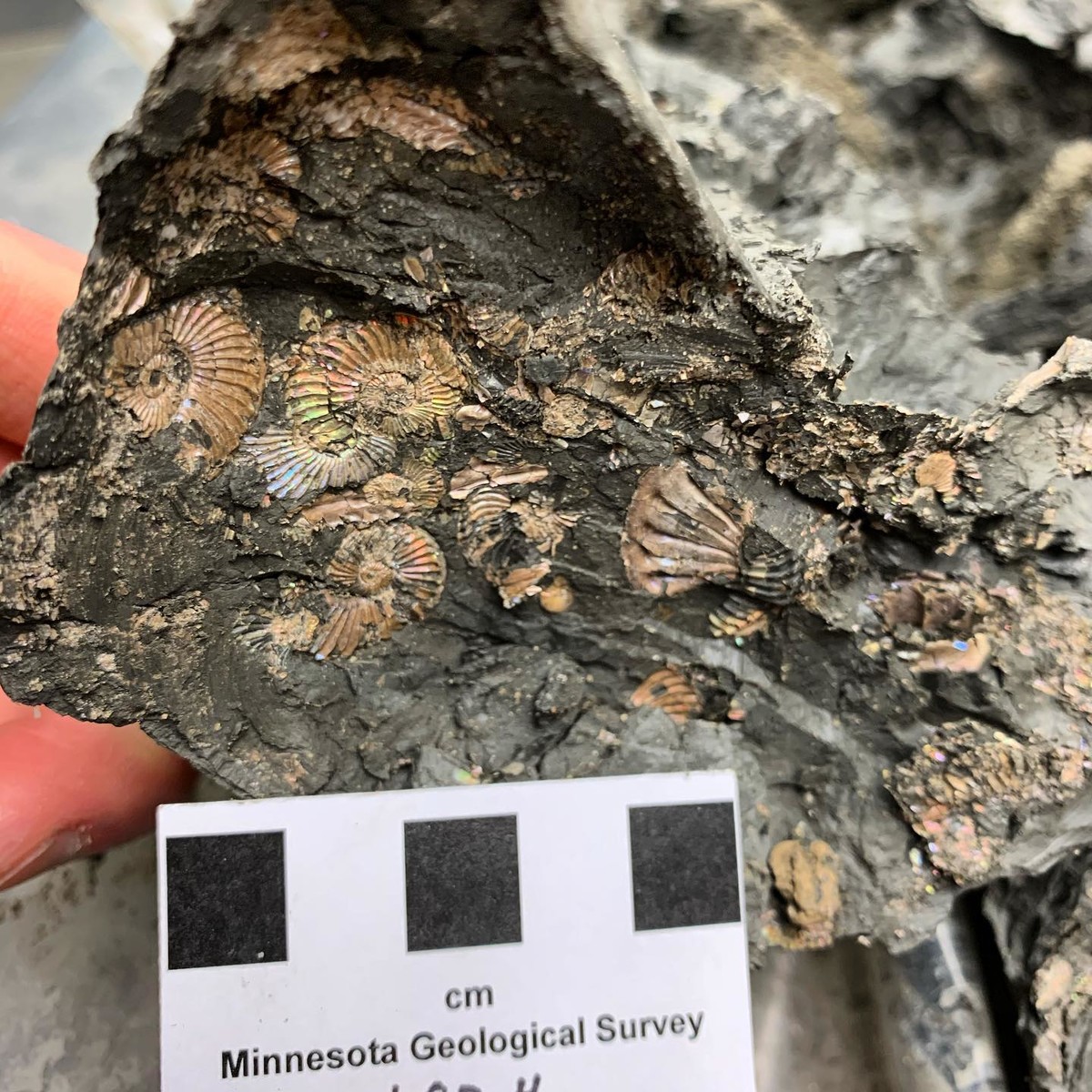