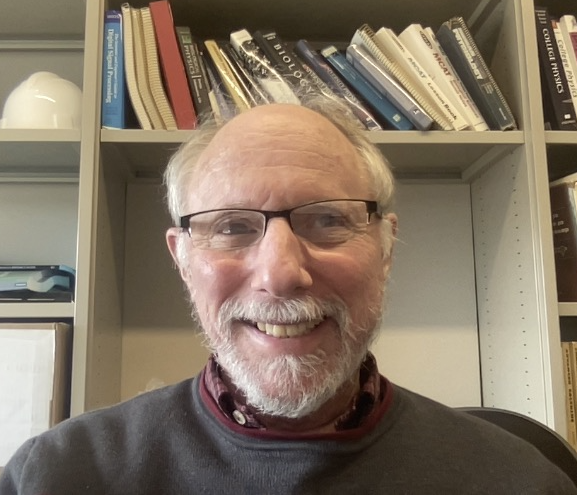 Ken Heller was born in Trinidad during World War II. He grew up in South Florida where he graduated high school. After high school he went to the University of California, Berkeley. He graduated from Berkeley with a physics degree and entered graduate school at the University of Washington. After his first year at Washington, he took a leave to join the Peace Corps where he served in Nigeria and Kenya teaching physics, general science, mathematics, and coaching basketball. He also participated in a workshop in Ghana to improve the preparation of school teachers in science. Upon his return to Washington, he worked with a small group of like-minded graduate students to change the teaching of introductory physics laboratories and the role of TAs; develop and lead a summer program to involve eighth grade minority students in research; bring physics to some of the country’s first art fairs. During that time, he learned how to ski and climb mountains. At Washington, he joined the experimental high energy physics group, and moved back to California to help run an experiment at the Berkeley Bevatron and then help build his dissertation experiment at the Stanford Linear Accelerator. While at the Bevatron and SLAC, he worked at the Lawrence Hall of Science in Berkeley and the Exploratorium in San Francisco during their development. Returning to Washington to analyze his data, he worked with the Pacific Science Center in Seattle, set up a mini-Exploratorium in the physics department, and lobbied Congress against the Vietnam war. He also met his future wife Patricia, a fellow graduate student and instructor at the University of Washington in one of the groups that established the field of Physics Education Research. Following his marriage to Patricia, he took a post doc at the University of Michigan where he helped build some of the first experiments at Fermilab, E-8 and its successors, and analyzed data at CERN. He then joined the physics faculty at the University of Minnesota, and continued his experimental work at Fermilab, Brookhaven and in the Soudan mine. During this time that he also helped build the experiment that discovered the Tau neutrino at Fermilab and the MINOS and NOvA long baseline neutrino oscillation experiments that connected Fermilab with Northern Minnesota. He also joined with his wife to form one of the early PER groups. The PER group pioneered work that investigated the problem solving of introductory physics students and developed curricular tools that encouraged students to develop the necessary collaborative and metacognitive skills to solve problems. Today, Ken continues to work in both high energy physics and PER. In PER, Ken’s current work includes investigating potential diversity barriers in the physics PhD program, the development of computer software to provide personal coaches for the metacognitive skills necessary for problem solving, and the role of algorithmic mathematics in physics courses. In high energy physics, Ken continues his work in physics beyond the Standard Model by helping to build the Mu2e experiment that looks for charged lepton flavor violation and exploiting the increasing data from the NOvA neutrino oscillation experiment.

My research involves building and analyzing experiments to probe the unknown physics beyond the Standard Model. Currently my group uses leptons, both muons and neutrinos, as that probe. Much of our recent effort has been building the detectors necessary to make the necessary measurements. Previously, my group built the massive NOvA neutrino detector that is still taking data and we are now building the electron tracker detector modules for Mu2e.

Leptons are the only known elementary particles, other than the photon, that can be directly manipulated in the laboratory. Our NOvA experiment uses neutrinos to investigate the origin of mass and perhaps the origin of our universe. Thanks to neutrino oscillation experiments such as MINOS and NOvA, we now know that neutrinos have mass and can oscillate from one type to another in flight. The NOvA experiment, shoots a beam of neutrinos through the Earth from Fermilab to our Laboratory in Northern Minnesota where the type of neutrinos is identified. This long baseline neutrino oscillation experiment measures the difference between neutrino and anti-neutrino oscillations. This difference could explain the puzzle of why we have a matter dominated Universe. The experiment also determines the ordering of the neutrino masses which could shed some light on the origin of mass. In addition, NOvA searches for new particles such as sterile neutrinos or magnetic monopoles and can also detect neutrinos from a supernova in our galaxy if any occur.

The Mu2e experiment is will detect a muon converting to an electron and nothing else. The muons are stopped in an aluminum target where they are held in atomic orbit. Most of the muons decay to an electron and two neutrinos but if any convert only to a single electron, that can only occur by new physics. The signal for this conversion is an electron whose energy equals the mass difference between the muon and the electron. To dig this signal out from 1016 normal muon decays, requires a very precise determination of the electron energy. That energy is measured from the curvature of the electron’s trajectory through a magnetic field using an electron tracker. We are building the modules of that tracker at Minnesota. These modules are shipped to Fermilab and assembled into the experiment. To get a precise energy measurement, electrons cannot go through much matter. To accomplish this, these modules are made of individual tubes whose walls are about the thickness of a human cell.

Since I teach at a University, I am also interested in the most effective way to assist students in learning Physics. In particular our Physics Education Research Group is investigating better ways to teach physics through problem solving. This involves analyzing student problem solving and constructing computer tutors to develop the metacognitive aspects of solving a problem. My group is also investigating ways of minimizing algorithmic calculations using publicly available software. Another research direction is to increase the diversity of the people in physics by identifying barriers in the physics curriculum that affect people differentially but do not increase educational quality.