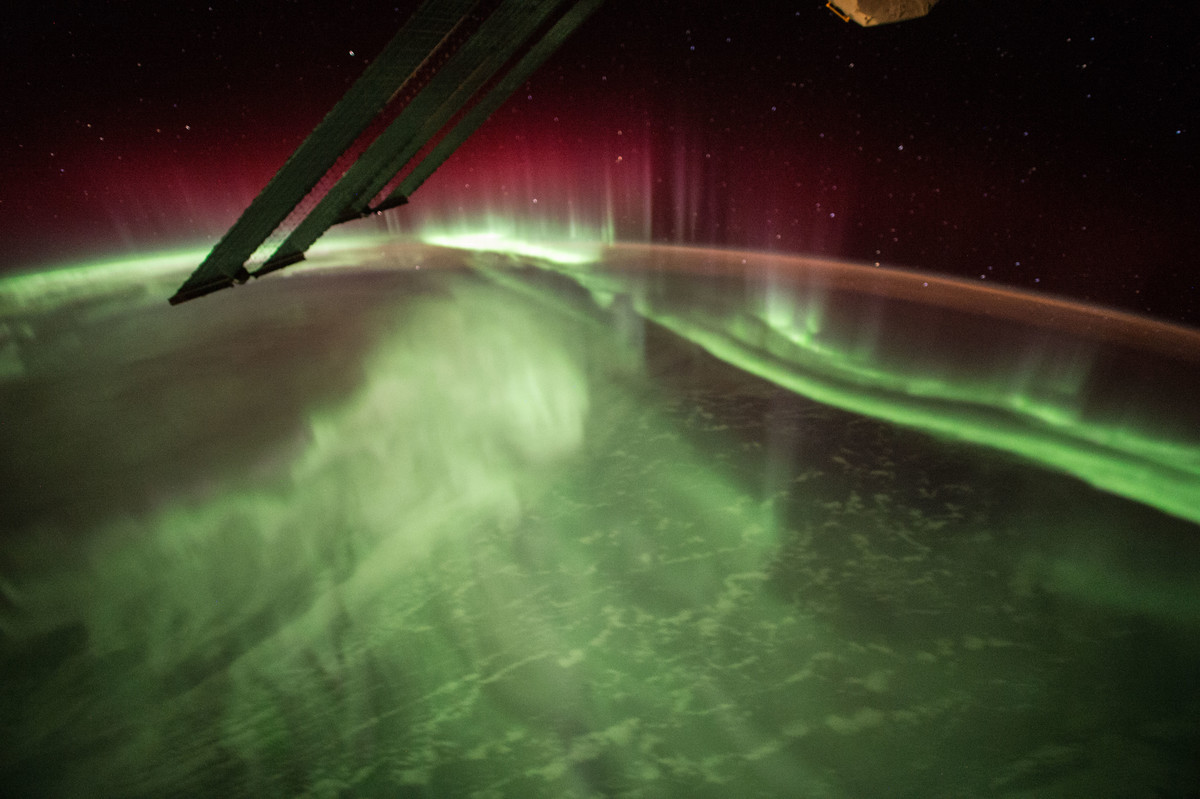 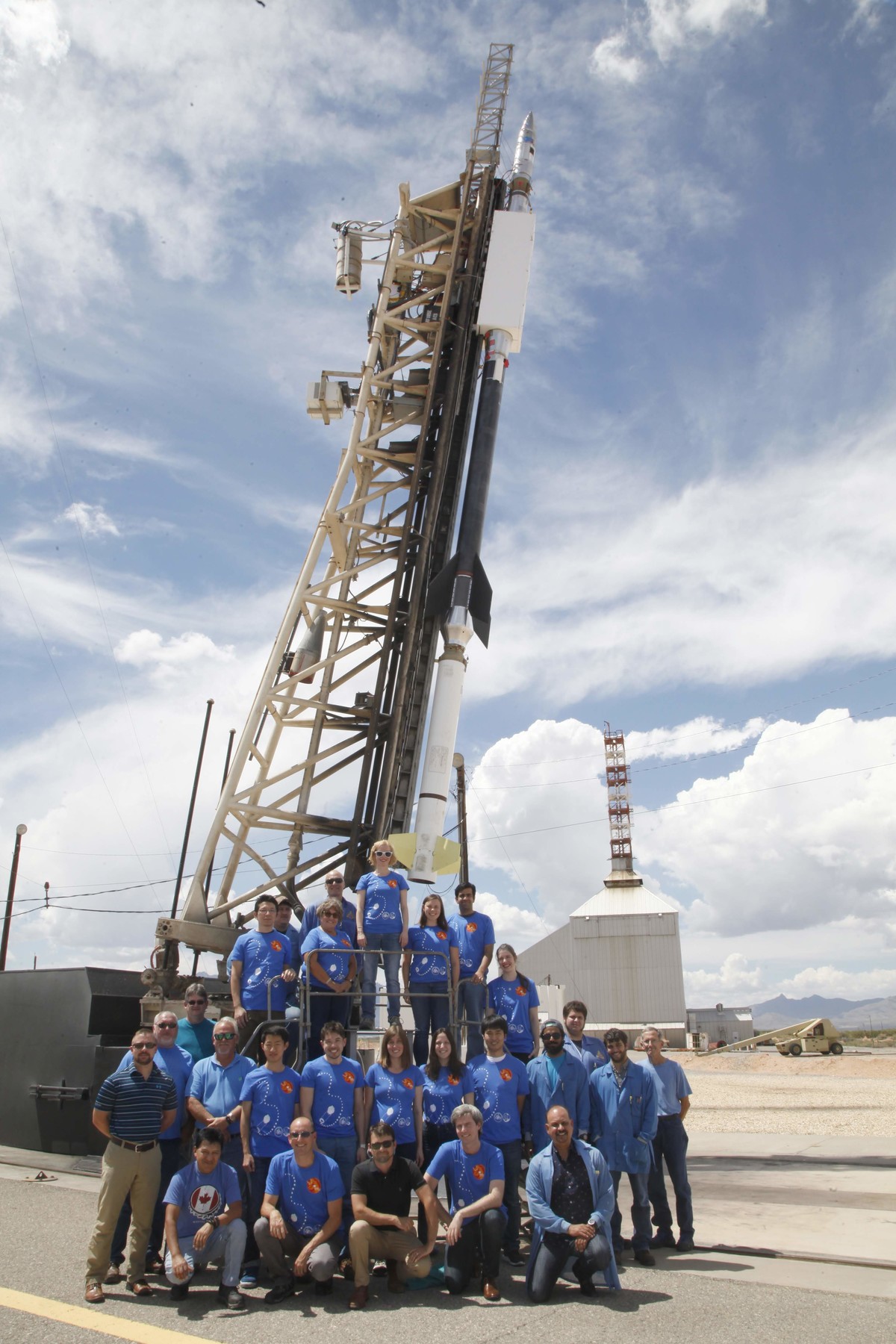 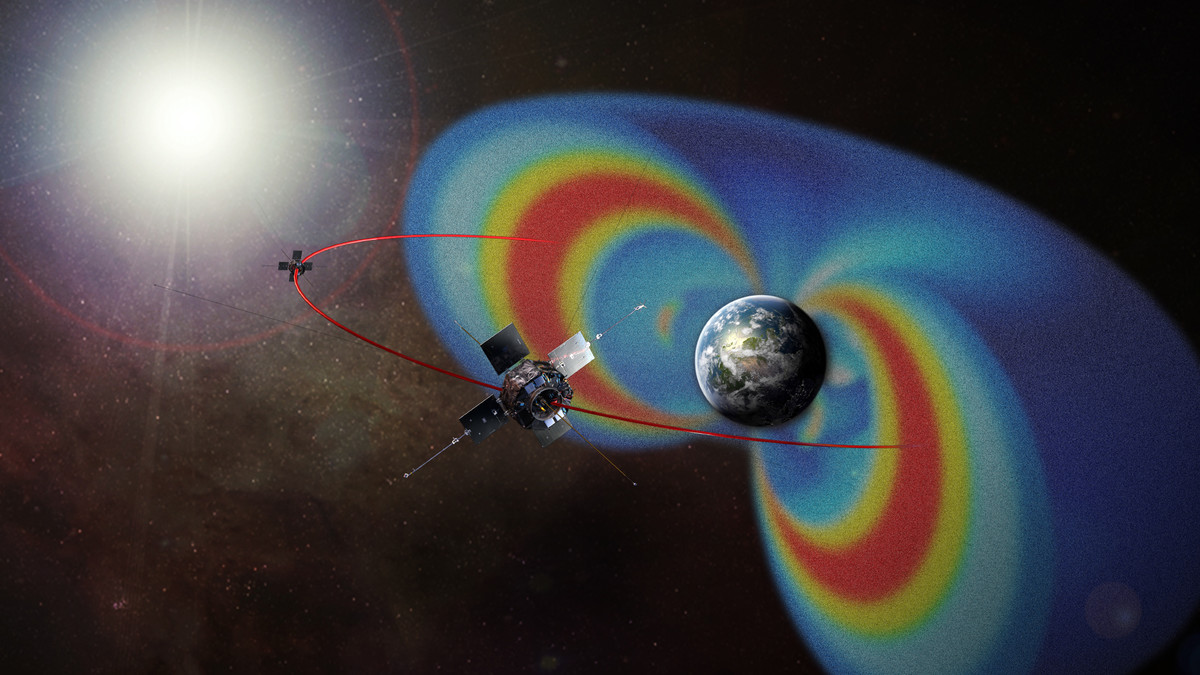 I am interested in how charged particles get accelerated to high energies in the naturally occurring plasmas in the heliosphere and the variety of plasma and radio waves that electrons excite and interact with. I study large-scale structures excited by magnetic activity on the Sun, interplanetary shocks, reconnection (a process that converts stored magnetic field energy into flows and heating of plasma, and powers solar flares, and magnetic activity around the Earth including aurora), and the dynamics of the Earth’s radiation belts. Our newest mission is Parker Solar Probe (launched in August, 2018), which has already gone closer to the Sun than any previous satellite, to learn why the solar corona is so hot and how the solar wind is accelerated. My main research is analysis of data from satellites, but my group also does simulations utilizing the Minnesota Supercomputer Institute, and laboratory plasma experiments performed at UCLA.

Below: Working with Prof. Lindsay Glesener, we have identified correlated periodicities in radio waves observed by Wind (left) and Parker Solar Probe (middle panel) and in EUV wavelengths in the solar corona as seen by Solar Dynamics Observatory in a solar active region (right).

These data provide evidence for modulation of small-scale electron acceleration in the corona and associated heating. The observations also suggest that there is coupling between the neutral gas p-mode of the Sun and modes in the charged plasma of the corona. 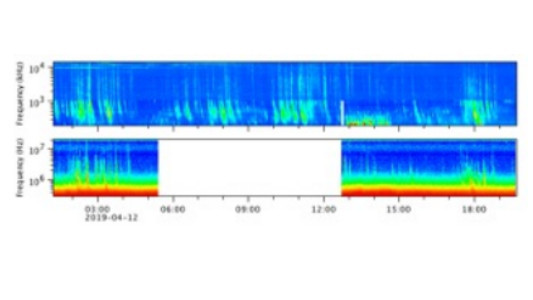 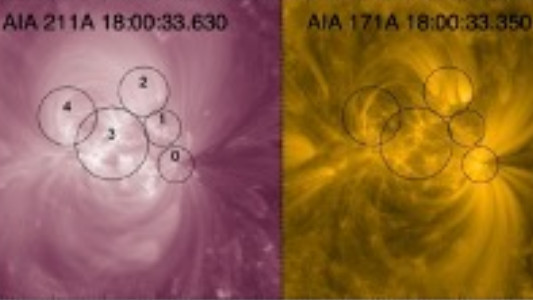 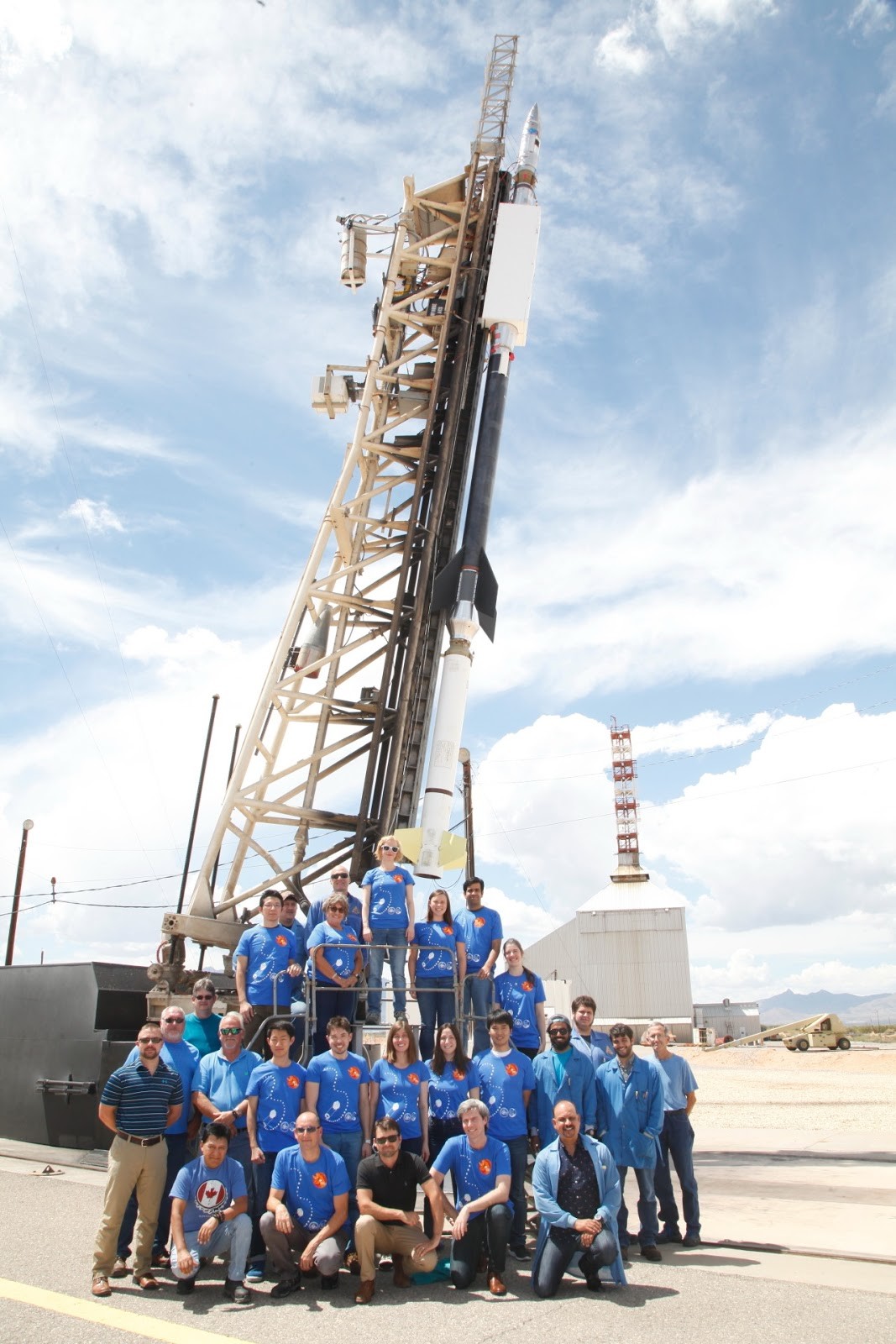 Occasionally (actually fairly often!) the Sun suddenly releases huge amounts of energy from its magnetic fields. While this energy constitutes a negligible fraction of the total energy in the Sun, each energy release provokes intense heating, bright radiation, and efficient acceleration of particles in the Sun's outermost atmosphere. Sometimes these events eject masses of plasma into interplanetary space that can impact the Earth's magnetic field, causing the aurorae and posing radiation risks to spacecraft and astronauts, and electromagnetic risks to power grids. It is still not known how these "solar flares" convert energy so efficiently and accelerate particles to such high energies as are observed. Moreover, it is not apparent what determines when a large flare will occur, nor how large it may be. The solar astrophysics group at UMN attempts to evaluate these phenomena by studying X-rays emitted from solar flares. We study all types of flares on the Sun, from large eruptive events all the way down to small, frequent ones. This requires using data from cutting-edge solar telescopes (RHESSI, NuSTAR, SDO) as well as developing new telescopes to better investigate the high-energy Sun. Our instruments have flown on sounding rockets and high altitude balloons, and we are currently working on CubeSats and a NASA Small Explorer mission. The capabilities of these new instruments will open a new door by which we can understand some of the most energetic phenomena in the solar system. 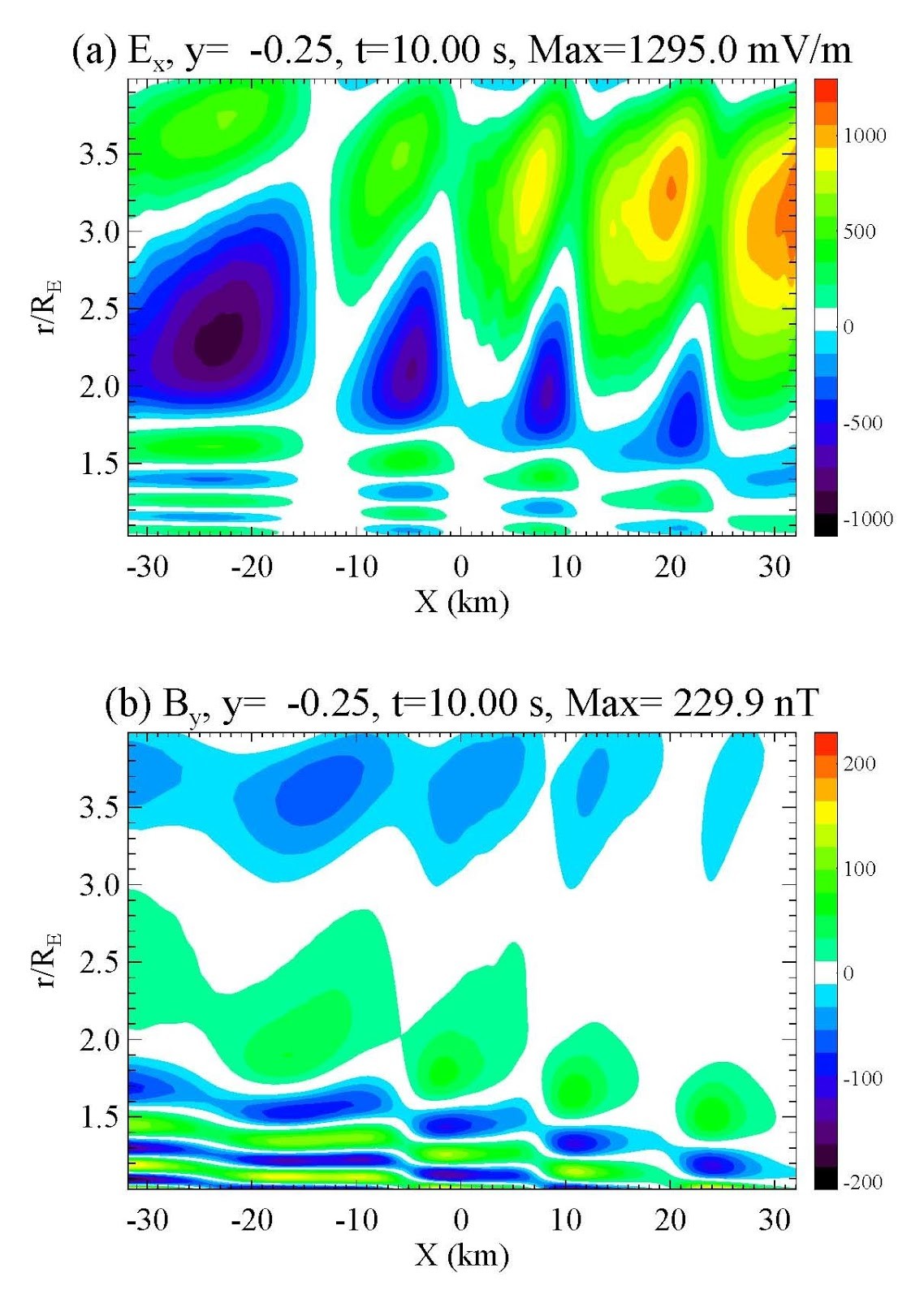 My research emphasizes a fundamental theoretical understanding of the dynamics of plasmas in the Earth's magnetosphere, as well as in other planetary magnetospheres, the solar wind, and other astrophysical environments. I am particularly interested in the dynamics of the Earth's auroral regions. In these regions, strong currents flow along the magnetic field ("field-aligned currents") that are dissipated in the ionosphere and by accelerating the particles that produce the aurora. Changes in these current systems are mediated by waves called Alfven waves, which correspond to transverse fluctuations of the geomagnetic field. Although Alfven waves were first studied using magnetohydrodynamic (MHD) theory, I have approached them using a more complete kinetic theory; thus, these waves are sometimes called kinetic Alfven waves. Such waves can directly accelerate electrons into the ionosphere to produce the aurora. In addition, we are studying the ways in which these waves can evolve into quasi-static parallel electric fields that are known to be associated with discrete auroral arcs. These studies lead to an overall understanding of ultra-low-frequency (ULF) waves in the magnetosphere, especially the eigenmodes that can form due to the inhomogeneous nature of the magnetospheric plasma. Parallel electric fields are also necessary for the process called magnetic reconnection, which refers to the reorganization of the magnetic topology in thin current sheets. We study the dynamics of these processes as well. ULF waves are also important in Jupiter's magnetosphere, where they are driven by the motion of Jupiter's moon Io. This work also benefits from collaboration with Senior Researcher Dr. Yan Song. Her work emphasizes the fundamental theory of particle acceleration and magnetic reconnection, emphasizing a dynamical approach that improves upon the quasi-steady descriptions often used to discuss these phenomena.

My research focuses on in-situ measurements of electric fields associated with convection and waves in the collision-less, magnetized, plasmas of the Earth's magnetosphere, the solar wind, and the outer corona of the sun. We are interested in the structure of interplanetary and planetary shock waves, magnetic field line reconnection, and auroral particle acceleration-- and the role of the electric fields in these structures in driving dynamics and particle acceleration. We are currently the lead (P-I) institution for the Electric Fields and Waves Instrument on NASA's Van Allen Probe Spacecraft and Co-Is on the Fields Instrument on the NASA's Solar Probe Mission to the Sun. Solar Probe will pass to distances of 10-30 solar radii of the sun-- the closest approach to the Sun of any spacecraft and study the processes that power the acceleration of the solar wind. 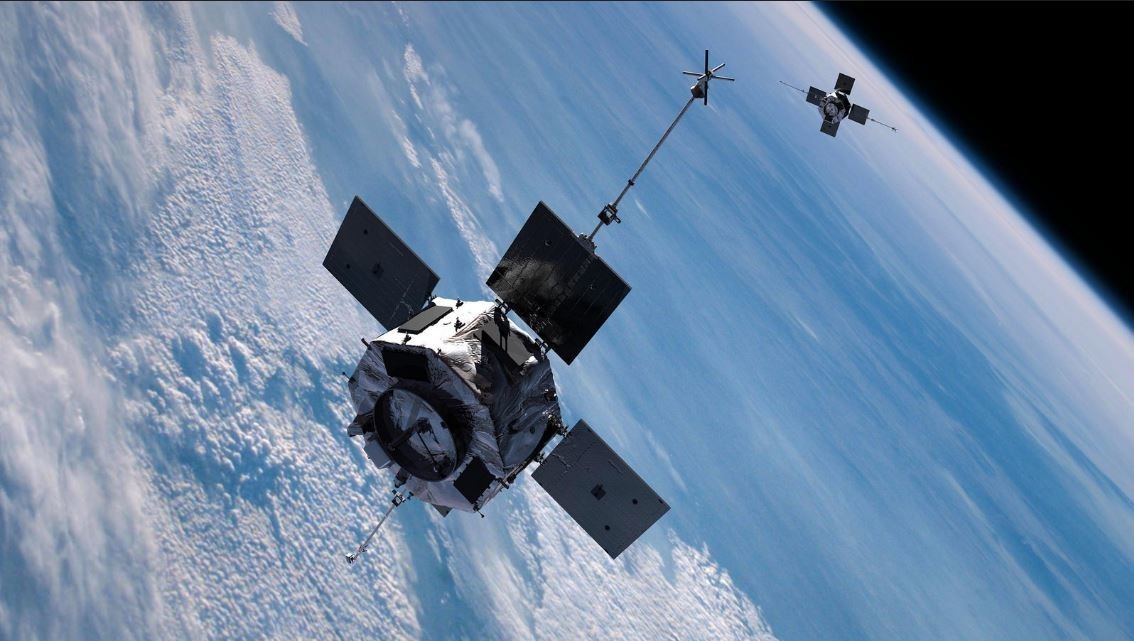