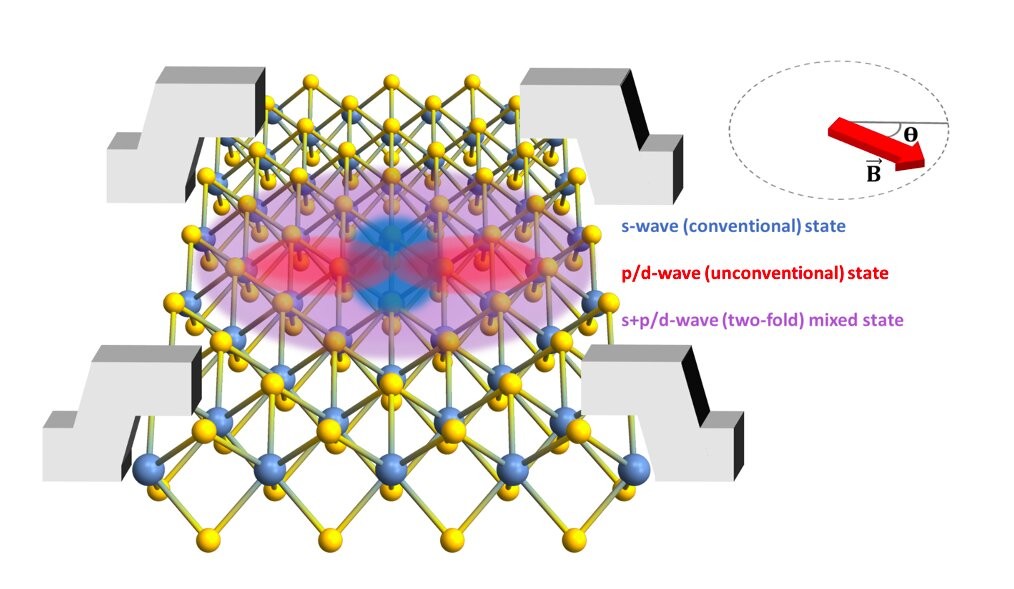 A collaboration that includes four faculty members of the School of Physics and Astronomy, Vlad Pribiag, Fiona Burnell, Rafael Fernandes and Ke Wang, has discovered that a unique superconducting material has unforeseen properties when it was studied in a very thin layer. It is not uncommon for materials to behave differently when they are at a very small size, but this material has potentially beneficial properties. A recent study of niobium diselenide (NbSe2)  by the collaboration found that the material in 2D form (a very thin substrate only a few atomic layers thick) is a more resilient superconductor because it has a two-fold symmetry, very different from thicker samples of the same material.

Motivated by Fernandes and Burnell’s theoretical prediction of exotic superconductivity in this 2D material, Pribiag and Wang started to investigate atomically-thin 2D superconducting devices. “We expected it to have a six fold rotational pattern, like a snowflake.” Wang says.  Despite the six-fold structure, it only showed two fold behavior in the experiment.” “This was one of the first times it was seen in a real material,” Pribiag says.

Fernandes and Burnell were exploring this possibility in parallel, but when they saw the data, they were able to work out the details of this phenomenon. They attributed the newly-discovered two-fold rotational symmetry of the superconducting state in NbSe2 to the mixing between two closely competing types of superconductivity, namely the conventional s-wave type typical of bulk NbSe2 and an unconventional d- or p-type mechanism that emerges in few-layer NbSe2. They have very similar energies in this system, they interact, and are competing because they are close in energy. However, they can be distinguished because they have a different symmetry.

“We later became aware that physicists (Kin-Fai Mak, Jie Shan) at Cornell University were reviewing the same physics using a different experimental technique, namely quantum tunneling measurements,” Pribiag and Wang said. “Then we decided to combine our results with theirs and publish a comprehensive study.

This is the first step toward a larger goal of understanding unconventional superconducting states such as topological states, which could possibly be used in quantum computing. In a 3D material, such as a silicon wafer, the height will always fluctuate by a couple nanometers. “What we want is a completely flat interface on the atomic scale. We believe this system will be able to give us a better platform to study materials to use them for quantum computing applications.” Burnell, Pribiag and Wang next plan to build on these initial results to investigate further the unconventional superconducting properties of atomically thin NbSe2 in combination with other exotic 2D materials, which could potentially lead to topological superconductivity for future computing platforms