Karin Gessner has deep roots in the Department of Civil, Environmental, and Geo-engineering; Her great-grandfather, Algot Johnson, graduated from the School of Mines in 1910. His presence continues to greet all students who enter room CivE 205, which bears his name. And though Gessner was young when her great-grandfather died, she still carries on his legacy through the Al Johnson construction company scholarship. These deep family ties explain a lot about Gessner's commitment to engineering, quality, ethics, and community service. 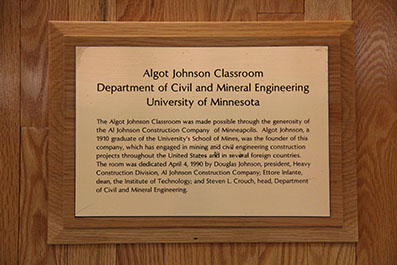 Gessner began working in the family business after completing her Bachelor of Civil Engineering and Master of Science in Industrial Engineering at UMN. Al Johnson Construction Company focused on heavy construction, and her first project was building a new lock at the Winfield Lock and Dam in West Virginia.“It was a 3-4 year project and I was there for the first year of the project. I loved it! That was my first big experience with heavy construction on my own. After that, I came back to Minnesota and continued working in heavy construction with my father and all the guys.”

"It might not have mattered what they were doing, I just really liked the people. This realization really came home for me when we had a consultant come in for a strategy session just a few years after I had started working at the company. Part of that effort was to complete a personality assessment. We all came out with the exact same personality type! We all thought that was hysterical, but the consultant though that, as a company, we needed to get some people who think differently, some diversity of thought. That experience explained for me why I was so comfortable with these people. I had found my place, and it was the people that brought me into engineering."

In the later 1990s, it became apparent that the company was facing limited growth in their narrow niche market of building locks. Gessner’s forward-looking father, Tom Gessner, began the process of winding down the company and looking for ways to diversify. Because the company had large projects throughout the United States, it took about 5-8 years to wrap them all up and complete the closure.

“In that process my father had purchased Red Devil Equipment, a family owned business—like ours—in New Jersey. The company made paint mixing machinery. They were transitioning from the third to the fourth generation and needed to sell off the equipment division.

“Before the purchase, my dad had contacted Sherwin-Williams, the largest paint company in the area. He asked their advice about purchasing the paint mixer manufacturer. ShermanWilliams was positive about the purchase, stating that it would be valuable to have another mixer company in the area. So, we went forward with the purchase and almost overnight moved the whole company from New Jersey to Minneapolis. One day several trucks of equipment rolled up. We didn’t really know what we were doing, but we jumped in and figured it out—which is what engineers do! We unloaded the trucks, looked at the drawings, and took it from there. Sherwin-Williams has been a faithful customer ever since.

“When we bought the company 25 years ago, everything was belt driven and we switched it over to gears. My dad wanted to build something that would never break down; belts just inherently break. So we made a conscious decision to build something that lasts forever. We are known for that; we make our equipment extra durable. Our products last for millions of cycles, with 20- to 30-year life spans. Some people tell us we should plan in some obsolescence so customers have to regularly buy something new, but we don’t do it that way. It goes back to our core values. ‘Build it to last’ is our philosophy. That’s who we are and it’s worked so far.

“When the construction companies were all wrapped up, I came over to Red Devil full time. My father said to me, ‘Either you run this or I’m going to sell it.’ I told him, ‘I’m all in!’” 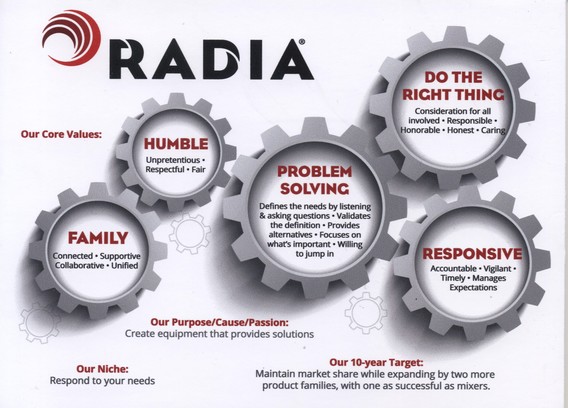 Gessner has been the CEO for 15 years now. The company recently went through a rebranding and changed the name from Red Devil (which was problematic in some overseas markets) to Radia. The new name has been well received by customers

“My father is now the Chairman of Radia. He is involved on a fun, creative level; we call him ‘the chaos maker’! He comes in with very common sense ideas—it is the civil engineer in him. He has very practical, solution oriented ideas. He comes in to talk with the engineers, and he always brings it right to the core. It is helpful for the engineers to think things through with him.

“I am the oldest of three and we all work together at Radia. We know how lucky we are and we all appreciate that. It is rare: we all get along and they are happy to let me run things!

“I realize that I am very comfortable with people who have an engineering mindset. For me, that means a practical, problem solving approach—very practical common sense. Our employees have to be able to solve problems quickly, or at least jump in, engage in the conversation, and throw down some ideas. Civil engineers, especially, are the least ethereal of all engineers. Our hands are literally in the dirt!

“As we bring new people into the company, I have to work a little harder with other types. By the time I see candidates, their technical capabilities have already been vetted. So what I look for is a spark in their eyes, an energy and enthusiasm, a willingness to jump in, and a lack of entitlement. It is hard to find that, but it is so fun when you do. Those people really magnify the energy in the room.”

“Radia is committed to family and community. A value of giving back started with my great-grandfather, Algot Johnson, and his gifts to the University. I did not know him well, but my parents instilled in me values of education and community service. I am trying to pass them on to my children, now, too. My family and our business are committed to education, especially promoting science and engineering for upcoming generations.

“I very much enjoyed my time at the U. I had gone to a small east-coast school (Bucknell University in Pennsylvania) for my first two years, but decided that was not for me. When I came back to Minnesota, I was really ready to be a serious student. I knew I was going to work for my dad, and I was motivated to finish school and start work.

“Steve Crouch, now Dean Crouch, was then the head of the civil engineering department; he brought me on board and guided me through the transfer process and helped me develop a plan for graduation. I studied with Professors John Gulliver, Catherine French, and Andrew Drescher.

“Even though my job is now management, I still draw on my engineering training. It is all about problem solving, which is one of our core values here at Radia. I am problem solving all day long. That mindset came from my upbringing and was reinforced in my civil engineering training. It is all about block and tackle, defining variables, determining what is really important and what is not. Engineering training is where you get to be really good at problem solving skills. I wish everyone could get exposure to that kind of training because there is so much value in it. Not everyone needs to differentiate an equation, but everyone needs to know what an equation is, and how to understand what the pieces are.

“I love supporting education and STEM (science, technology, engineering, and math) education in particular. I think having more engineers is key for the continued success of the country, so whatever we can all do to encourage students in that direction, we should do. If a student has even a little interest, I would encourage them because STEM skills are valuable and transferable, even if the student does not see it all the way through to get an engineering degree.

“I have three children. My middle child is a total STEM guy. He loves Legos— he was doing kits for ages 11-16 when he was six years old! We do everything we can to encourage him. However, as parents, we have to seek out STEM experiences and often pay for them independently. There are very few STEM-focused schools. I hope that someday STEM training will be more mainstream. That is why Radia supports Rogers Elementary STEM Magnet School.

“Radia supports other community projects, too, like the Ronald McDonald House (RMH). That is such a tremendous organization. As a company we participate in Cook for Kids a couple times a year. It is great to interact with the families who are so inspiring.

“I got connected with the Ronald McDonald House through a friend of mine who had been on the board for years, through his mother and his grandmother. I had been talking to him about how to connect with the owners of a compactor company we’d bought, whose main client was McDonald’s. My friend hand delivered me to the person who was running the House, and I got appointed to the Board of Directors. It has been such a wonderful connection. It started because of the compactor business and their connection with McDonald’s, but when I saw the RMH video, I was in tears. I was instantly committed to the cause. I’ve been there five years now. I bring the small business, entrepreneurial spirit to the board. They have a lot of high-profile people. My role is to bring the civil engineering, get-it-done perspective. It is a good balance. That experience has been really rewarding and fun.

“Engineers have to develop a somewhat humble mindset, more than some other areas. Engineers cannot assume they know the answer, and they need to be aware of how things might fail and what to do if that happens. There are so many consequences to a bad engineering decision. Other disciplines, like business majors perhaps, don’t appreciate that as much as engineers do, at their core.

“I was so glad to learn about the Order of the Engineer ceremony that CEGE now offers as part of the departmental graduation. I don’t think anything similar to that exists in business school or other areas. Not that it is acceptable to be unethical in these other fields, but when an engineer has to sign her name on a PE certificate and say I verify this work, it makes a difference. For all those reasons, it is important to emphasize the ethics and responsibility of being a civil engineer.”

Karin Gessner is a great example of the thoughtful, practical, ethical mindset CEGE tries to cultivate in our students. It’s clear that the world needs more people like Karin Gessner!

Back to Spring 2016 Magazine