On the Crest of Waves Research

The study of acoustic and elastic waves is one of the pillars of modern engineering mechanics. Recent technological advances have turbocharged various new developments in this rich field and opened exciting possibilities for engineering breakthroughs and new collaborations with the physical sciences.

The work of three CEGE researchers illustrates the breadth of waves research being done in CEGE and how these research approaches and results are addressing some of today’s toughest enduring and emerging engineering challenges.

“WAVES AND VIBRATIONS ARE UBIQUITOUS. WITH PROPER UNDERSTANDING WE CAN USE THEM, WITH VIRTUALLY NO ADVERSE EFFECTS, TO ‘SEE THROUGH’ AND INTERROGATE BODIES AS LARGE AS OUR PLANET OR AS SMALL AS TINY LESIONS IN OUR BODY.”

Guzina’s research goal is to develop innovative ways in which waves can be used to non-invasively probe, image, and diagnose earth’s subsurface, civil infrastructure, engineered materials, and even human bodies.

Guzina’s research addresses issues at the interface of engineering and applied mathematics. His engineering expertise gives him insight into physical processes and mechanics that make things work. He also understands mathematical theories and computational tools that can make engineering tasks easier. His multidisciplinary knowledge helps him see new pathways for progress, leading to new theories and new solutions.

Vibration and waves have long been lynchpins of remote sensing. Waveform sensing capabilities have greatly expanded over the past decade, due in part to breakthroughs in wireless communication, signal processing, and design of microelectromechanical systems. These technological advances, however, have yet to provide real-time 3D “scans” of solid bodies, which could be used to maintain dams or nuclear power plants, or to ensure safe mining operations and efficient energy production (e.g., hydraulic fracturing).

To help bridge the gap, Guzina’s research group is developing new theories and techniques to make 3D imaging and diagnosis of solids and structures by way of waveform tomography (which normally requires the use of supercomputers) possible for everyday engineering applications. See examples in Figure 1.

Materials including rock, concrete, or human tissue, are rarely homogeneous as presumed by classical theories of wave-based sensing. Instead, they contain small features (mineral grains, aggregate, vasculature) that cumulatively affect the propagation of waves through the matter. One impact is that “short” (seismic or ultrasonic) waves repeatedly bounce off small-scale heterogeneities, thus restricting wave-based interrogation of real materials to “long” (low frequency) waves. Unfortunately, the use of only long waves as an imaging tool is limiting because the resulting tomographic images are coarsely pixelated.

Guzina strives to propel the use of sub-wavelength imaging by looking at long-wavelength data and identifying the “fingerprints” of sustained, small-scale heterogeneities inside a material. He develops theories addressing two funda¬mental questions: how does microstructure affect the global wave motion? and what can we learn about the microstructure of an anomaly using tomography with long-wavelength illumination? Guzina directs his research toward analysis of media with microstructures that are random, periodic, or fractal (Figure 2); in this way he develops next-generation tools to characterize and diagnose earth’s subsurface, engineered materials, and human tissue in ways that would have been unthinkable only a few years ago.

Human tissue, unlike rock or concrete, are easily deformed and so propagate nonlinear ultrasound waves, even at small amplitudes. This nonlinearity endows ultrasound waves with an ability to help diagnose human tissues in ways other imaging techniques cannot. For instance MRI scans are capable of revealing very small lesions in a human body; however, a biopsy is often required to diagnose a dark spot in an MRI image. Guzina is developing models and theories by which nonlinear, focused ultrasound waves can help a radiologist make a diagnosis without a biopsy by remotely pushing on a lesion via the so-called Acoustic Radiation Force.

“WE CAN THINK ABOUT WAVE DISTURBANCES AT VARIOUS SCALES. THE VERY LARGE SCALE IS AN EARTHQUAKE, AND WE OFTEN SEE ITS DESTRUCTIVE EFFECTS. IN MY LAB, HOWEVER, WE STUDY VERY SMALL DISTURBANCES—MICROCRACKS—THAT ARE MILLIMETERS IN SIZE AND LAST ONLY MILLISECONDS IN TIME.”

The goal of Labuz’s research is to use waves called acoustic emission (AE) to study how brittle solids (rock, concrete, etc.) fail or break. This understanding is useful in designing more economical ways to break rock and in protecting workers in underground mines.

Labuz and his students focus their research on three main areas: Developing and testing theoretical models related to quantitative analysis of AE data, in particular calibrating transducers and modeling crack sources; Conducting experiments to verify AE results through complementary observations of fracture initiation and propagation; and Applying AE to monitor the failure process of structures composed of brittle solids under various loading conditions, from tensile fracture to shear localization.

Rock and concrete may appear solid, but microscopic observations have shown that small cracks are naturally present in these brittle materials. When mechanical or thermal loads of sufficient magnitude are applied, the small cracks can grow, releasing some energy as elastic waves. The emitted waves, AE, can be detected by piezoelectric transducers attached to the surface of the material. “Listening” to these waves can help researchers understand what is going on beneath the surface. AE has proven to be a powerful engineering technique to evaluate the integrity of a structure, such as an under¬ground mine or a concrete bridge, by determining the locations of weak planes or unseen fractures within the structure.

AE has been widely used as a monitoring technique to determine cracking and assess degradation of materials to assure safety of various systems. One of the first observations of acoustic emission, made by the US Bureau of Mines in 1938, was associated with an underground mine. Current applications typically focus on structural health monitoring in industries from aerospace to construction, nuclear to petrochemical, mining to offshore drilling. AE has even been used to evaluate crunchiness of breakfast cereal!

Commonly used detection systems consist of a number of transducers connected to a recording device (Figure 4). Based on the time it takes the elastic wave to reach each transducer, the positions of the transducers, and the speed with which the wave can move through the material, the location of each crack or source event can be calculated. The location of small (unseen) cracks is probably the most valuable information that can be obtained from AE data.

In general, the theoretical models of AE use principles and techniques similar to those developed by seismologists to study earthquake mechanisms. Obviously, the scales from the lab to the earth’s crust are vastly different. A more important difference, however, is that an earthquake is associated only with a sliding crack. When studying cracks in subsurface and infrastructure applications, the mechanism of crack opening must also be considered.

In addition to using arrival times to determine source locations, AE waveforms (Figure 5) can be analyzed to characterize a crack: the extent of sliding or opening and orientation.

Part of the research has concentrated on modeling an AE event as a small crack that slides and opens (or closes). This theoretical model relates a crack at a known location within the solid to the wave displacements at each transducer, and the transducer output (voltage) must be calibrated to actual displacements. The model can then be used to characterize the crack mode (opening and/or sliding) and orientation.

New methods have been developed by Labuz and his team of researchers that provide a means to determine crack kinematics even though the crack is not visible.

The capabilities of these methods can be demonstrated in the lab by loading a beam instrumented with AE transducers and testing it to failure. AE clearly locates the initiation of a fracture through the clustering of events (Figure 6). The analyses indicate that the small cracks generating the AE were on the order of millimeters in length, similar to the average grain size of the studied material. Further, the analyses show a crack-opening tendency compatible with the failure mechanism of the beam. The AE method allows for non-invasive evaluation of fracture in the subsurface and built infrastructure. 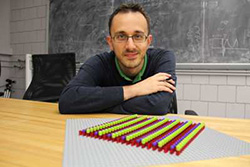 “MY STUDENTS AND I INVESTIGATE STRATEGIES TO CONTROL WAVES IN MEDIA CHARACTERIZED BY COMPLEX INTERNAL ARCHITECTURES. THE TECHNOLOGICAL GOAL IS TO DESIGN MATERIALS WITH DESIRED AND TAILORED DYNAMIC FUNCTIONALITIES. OUR ULTIMATE OBJECTIVE IS TO BE ABLE TO MOLD INTANGIBLE AND INVISIBLE ELASTIC WAVEFIELDS WITH THE SAME LEVEL OF FREEDOM AND FLEXIBILITY THAT WE NORMALLY OBSERVE IN THE MANIPULATION OF PHYSICAL MATTER.”

Recent years have seen a breadth of new ideas and concepts pertaining to wave control and manipulation due in part to the advent of a new class of materials called mechanical or elastic metamaterials. Metamaterials are structural materials that owe their unique behavior to their complex and unconventional internal structures rather than to their (chemical) compositions. Because of the unconventional way in which their internal structural components (beams, rods, shells, etc.) are arranged and connected geometrically, metamaterials behave in ways that are vastly superior to what could be achieved by their individual components taken as stand-alone elements.

The most exotic properties of metama¬terials are observed in the realm of wave propagation. “We can control the way elastic waves propagate in metamaterials,” Gonella says. “For example, we can design materials that block certain wave frequencies while allowing others, thus behaving as mechanical filters or waveguides (Figure 7). We can also engineer metamaterial architectures that can steer a wave, forcing it to follow a prescribed path within the material (Figure 8),instead of allowing it to propagate with equal speed in all directions, as is commonly observed in conventional media. This could be called an acoustic shield, capable of deflecting harmful waves away from a sensitive target. With these capabilities, metamaterials could revolutionize how we manage vibration and sound problems.”

It is possible to establish a rigorous mechanistic relationship between the wave propagation phenomena observed at the macroscopic scale and the geometric architecture of these materials. “A big component of our research work is dedicated to developing mathematical models, predictive simulation tools, and laboratory experiments necessary to shed light on this complex relation. Once this link is fully understood, the internal architecture of the material can be engineered at will and we can design materials with a wide range of desired functionalities.”

The applications for metamaterials stretch across a broad range of disciplines. An example taken from the aerospace world is the design of smart airfoil skins. The skin of a wing airfoil is a thin layer of material that gives the airfoil its aerody¬namic shape. It also protects the interior of the wing from excitations that might come from the outside--wind gusts or the impact of a projectile. A conventional skin (typically just a curved sheet of metal) could be replaced with a metamaterial layer equipped with wave-controlling capabilities that could steer and reroute the energy, preventing it from reaching the interior of the airfoil and causing damage.

Over the past few years, concepts of mechanical metamaterials have been proposed as solutions to problems in infrastructural engineering and earthquake control. Gonella’s group has embraced this challenge and is exploring concepts of seismic shields based on periodic arrays of tunable resonating units. “The application of metamaterials in seismic control is still fairly hypothetical, an idea that has only marginally been tested against realistic field data. Many challenges (such as size constraints, affordability, variability in the frequency signature of seismic events) must be addressed before seismic shields could be implemented. However, all the elements are in place and the potential is huge. We are not talking about a far-fetched idea; this is a powerful technology that is worth serious exploration.”

Gonella is very comfortable and even proud of the speculative nature of his research. “My main contribution is, first and foremost, to generate new ideas and support them with innovative proofs of concept. The process requires convergence of long-term efforts by a large pool of researchers. My research group always keep applications in front of us as guiding stars. However, our signature contribution comes from the bottom up, pushing from the fundamentals.”