A safe and reliable water supply has been a concern since the dawn of civilization. Advances made by engineers to ensure a clean drinking water supply, such as the use of filtration and chlorination, have been credited with saving more lives than medical doctors. Drinking water quality continues to be of prime concern, even making headline new (recall recent stories of lead contamination in Flint, Michigan). In Minnesota, water purification and public water supplies generally are safe and reliable. However, as recent news illustrates, we cannot take these valuable resources for granted. Researchers in the Department of Civil, Environmental, and Geo- Engineering are committed to protecting and improving the quality of our drinking water supplies.

Unpleasant taste and odor can give citizens an impression that drinking water is unsafe. The substances that affect taste and odor, however, often are natural compounds that are not harmful. Nevertheless, when water systems personnel get complaints about taste and odor, they take them very seriously. System fixes require extensive testing and often take time. Engineers always proceed cautiously as making changes to deal with a problem like taste or odor could upset a very complex system. In other words, cities want to be sure that changes made to make the water taste better do not compromise the safety of the drinking water supply.

When Minneapolis wanted to address some taste and odor problems, they reached out to CEGE Professor Raymond Hozalski, who has had success investigating a similar problem for the city of St. Paul, where geosmin was causing an earthy odor in the city water supply.

After a pilot study (from 2004-06), Hozalski recommended St. Paul replace their water utility’s existing anthracite-sand filter beds with granular activated carbon (GAC)-sand beds. The full-scale changeover at the plant dramatically improved drinking water quality, evidenced by a precipitous drop in customer complaint calls. In the St. Paul project, Hozalski and his team saw that the GAC filters were continuing to be effective much longer than expected. The filters were getting the geosmin out of the water right away, and the filters were not becoming “saturated” or exhausted; they continued to effectively remove geosmin from the water beyond the expected life of the filters.

“If we see removal happening after the expected limit (beyond the estimated sorption capacity of the GAC), then we look for another process taking place— most likely a biological process. It turned out the filters in the St. Paul plant were being regenerated biologically. We were able to demonstrate in the St. Paul plant that the microbes growing on the filter media were beneficial to the removal of geosmin.” A balance had been achieved. The removal of geosmin was maintained and the carbon filters continued to be effective.

St. Paul is a great example of what advanced technology can do to improve water quality. The researchers are hoping to build on what’s been done in St. Paul by working with other utilities around the state and beyond.

Hozalski is the primary investigator on this project, but he has a great team working with him to address all the interconnected parts. The key players from the University include Ben Ma, a graduate student in environmental engineering; Professor Tim LaPara, an expert on bacterial communities; and Professor Bill Arnold an environmental chemistry expert.

Sometimes, in the course of trying to solve practical water quality problems like the taste and odor issue, novel scientific discoveries are made. In 2006, Hozalski and his team made such a discovery in the St. Paul GAC filters.

LaPara explained, “We had assumed the microbes in the system were going to cycle carbon, but it turned out the majority of the bacteria were actually cycling nitrogen, which was unexpected.” The conventional knowledge is that ammonia oxidation is a two-step process: it goes from ammonium to nitrite, and then from nitrite to nitrate, and different organisms are responsible for each step. In St. Paul, the researchers found only one of the expected organisms was present, the one responsible for that second step. That had not been seen before. They published the discovery about this novel situation, proposing that there was a novel organism doing that first step, processing ammonium to nitrite. Very recently researchers from Europe demonstrated that the organism detected in St. Paul’s biofilters was responsible for doing both steps itself. Environmental researchers had not seen this in the 150 years of microbiology studies.

Hozalski and his team are hoping to build on what’s been done in St. Paul and to discover a similar solution for Minneapolis. It will not be a simple repeat, however. The Minneapolis project presents several new challenges.

The water supply in Minneapolis is somewhat more challenging to treat than the one in St. Paul. Although both cities ultimately get their water from the Mississippi River, the St. Paul supply is passed through a series of lakes before entering the city water treatment facilities. The lakes act as natural settling basins, which results in pretty clean and consistent input into the city’s water works.

In Minneapolis, water is taken directly from the Mississippi River to the Minneapolis Water Treatment and Distribution Services (MWTDS) system. The urban river gets a lot of runoff from rain and snowmelt, and consequently the levels of particles and dissolved constituents vary over time. This variability in the MWTDS water source requires more diligence and more monitoring to maintain a consistent quality of drinking water.

Different water, of course, means a different biological community. One of the first steps in Hozalski’s current research project is to assess the water in the MWTDS and determine what bacteria are present. LaPara likens his role to that of the FBI doing DNA forensics. LaPara gathers the DNA from the water, tracks down which bacteria are present, and determines the role each of the bacteria play in the situation.

Says LaPara, “Our techniques differ from what the FBI uses because they are tracking only a finite number of people, but when tracking down bacteria, there can be thousands of them at one time. Studying the DNA of bacteria allows us to tell with great detail which bacteria are present in a water sample.”

A common misconception is that all microorganisms are harmful, and the standard approach in water purification has been to kill everything in the water. “In fact,” says LaPara, “it is not easy to say that this bacterium is good and that one is bad. Overwhelmingly bacteria are benign or neutral; in truth, there are as many helpful and essential bacteria as there are harmful ones. We are moving toward using or cooperating with microbes rather than simply wiping them out. That idea can scare people a little bit. We need to communicate the beneficial potential of these microbes.”

The researchers are confident that GAC biofilters will maintain MWTDS water quality while improving the taste and odor of the water. Beyond that, they will be investigating additional potential benefits of the new treatment process by exploring how well the filters capture contaminants of emerging concern (CECs).

Most of the so-called CECs have been present in the environment for a long time. New analytical chemistry tools have allowed researchers to discover how widely these chemicals have spread throughout our environment. Concerns have been raised about the proliferation of these contaminants, although at this time, no associated health problems have been documented and, except for a few specific cases, no requirements have been established limiting levels of these chemicals. Environmental engineers, like Arnold and Hozalski, are interested in tracking these substances. In this project, the team hopes to establish a method for reliably controlling the presence and levels of CECs. In this study, eight particular chemicals are being studied to determine if the GAC biofilters help to control those trace contaminants, too.

CECs were selected based on their probability of ending up in the drinking water supply: contaminants from agriculture (focusing on herbicides), from wastewater (pharmaceuticals and personal care products), and from urban/ suburban runoff.

Arnold and graduate student Ben Ma worked together to develop the protocol for extracting and analyzing the chosen CECs. They were able to build on the work of another graduate student, Jill Kerrigan, who had developed a number of those procedures.

For this research project, the chosen CECs are being added to a pilot-scale treatment system (not to the city water!). The chemicals are introduced at very low levels, levels at which they might actually occur in the environment.

Professor Bill Arnold: “This project is unique in that a number of chemicals are being tracked, and they display a range of chemical properties. The project is also attempting to track these chemicals at the low levels found in the environment. The low levels of contamination make the analysis a little harder (researchers often add in larger amounts of a substance to make the lab work easier), but our process will allow us to more closely model what happens in reality and will make the results practical.”

“Because we are studying compounds at such low levels, we have to start with 1-2 liters and concentrate it. When concentrated, other elements that we do not want to analyze also get concentrated, like organic matter. So then a clean-up step is necessary. We take our cleaned samples to the Masonic Cancer Center, to quantify the CEC levels using a liquid chromatography tandem mass spectrometer. We have used this process to study triclosan in Minnesota lakes, to study estrogens, and for a study of contaminants in San Francisco Bay sediments. The analysis is very sensitive and very specific and helps us track chemicals in very small amounts.” 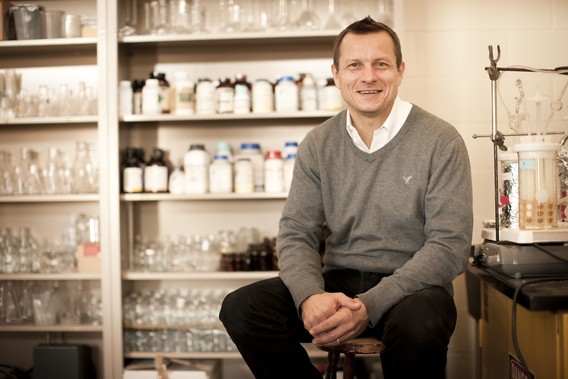 Raymond Hozalski values projects that involve partnership with city wate utilities for the connections and process as well as for the ultimate outcomes. "When doing research with the city utilities, we have real impact on a lot of people. The Minneapolis Water Treatment and Distribution Services affect not only Minneapolis, but also the suburbs, that's around 500,000 people.

"Working with the city utilities also offers the great benefit of being in the water treatment plant regularly, getting to know the details of the plants and the challenges they face. I bring that experience back into the classroom, where it has been hugely helpful in educating the students, particularly in the water and wastewater classes."

George Kraynick, manager of the Water Quality and Laboratory Services in Minneapolis, and also values this partnership. "This collaboration allows us to tap into UMN's expertise. The research being done on biologically active filters and CEC removal is relatively new and cutting edge science and will be beneficial to the City of Minneapolis and the water industry as a whole."

Back to Spring 2016 Magazine