Several future-looking visions for engineering have targeted the year 2025, or even 2020, which is now only two years away. Although there are a variety of views about what skills engineers will need in the future, there is wide agreement about one needed skill: the ability to work in a globally connected marketplace.

Engineers of tomorrow will be asked to solve problems with an awareness of global impacts. They will be expected to deliver solutions that are effective for a broad spectrum of people and cultures. Their methods and tools will be impacted by global availability and competition. To solve global problems and deliver global solutions, engineers will need to understand cultural differences and how those differences affect their work. It will be helpful to understand some limitations that can arise from a US-centric viewpoint.

In this issue we share perspectives of two students with global experience. Mariah Dooley, from Sioux Falls, South Dakota, has travelled, studied, and worked in Spanish-speaking countries. Edwin Jarquin Martinez earned an architecture degree in his native Nicaragua. He came to the University of Minnesota to earn his second degree in civil engineering.

To meet EDWIN JARQUIN MARTINEZ (BCE 2017) is to smile; his optimism is infectious. He is enthusiastic about most things and particularly about the role engineers will play in the future.

“Civil engineers must keep discovering and moving forward. I want to provide effective and creative solutions to our society. We will make a big impact!”

“We need to determine requirements and solutions quickly. We need to efficiently design and propose solutions. I started my first degree, architecture, in 2001 in Nicaragua; back then technology was limited. My professors required us to use slide rules and do calculations by hand. I was shaped in that old school perspective, which gave me a solid foundation in those fundamentals. Moving forward, our technology allows us to work so much faster in both design and construction. Engineers can use technology to produce solutions more efficiently.”

Had Jarquin Martinez known his path would lead him to the US, he might have prepared differently, but his plan was disrupted by a monkey.

A Monkey, A Wife, A New Life

Jarquin Martinez was working for a large design and construction company in Nicaragua that designed and constructed metal buildings. The company imported steel and fabricated cold rolled construction members, such as roofing, corners, angles, beams, etc., for (primarily) bridge designers. Jarquin Martinez created detailed construction drawings and cost estimates from designs brought to the firm by structural engineers. He also supervised and inspected installations, and sometimes travelled to building sites in Costa Rica and El Salvador.

The company decided to build a factory on the Pacific coast in El Salvador, strategically located to ease the import and storage of raw materials from China and the US. Jarquin Martinez was called upon to design the new office building, under the supervision of the company’s owner. The simple, functional building is Jarquin Martinez’s only built design. The building has since been sold, but Jarquin Martinez confesses to visiting the aerial view via Google maps to say, “I built that!”

Doing business in Costa Rica and El Salvador regularly put Jarquin Martinez in dangerous situations due to widespread crime and corruption. Once Jarquin Martinez arrived to deliver payroll on a job (always in cash) and found his coworkers tied up—the site had just been robbed. In spite of these trials, Jarquin Martinez notes the positive outcomes: “I got experience with the metal industry worldwide—prices, competition, imports, etc. And I learned to be appreciative for each day I’m alive.”

One summer, Jarquin Martinez returned home after a trip to find that his parents were hosting a foreign student, a recent high school graduate from Minnesota who had come to Nicaragua to continue her studies of Spanish language and culture. The female student, Casey, had originally been assigned to another family but was pulled from that household when the program organizers discovered the family had a pet monkey, which they thought would be too risky. So, Casey was reassigned to stay with the Jarquin Martinez family.

“It was fate,” says Jarquin Martinez, “that she ended up at our house.”

Casey was fluent in Spanish—she had been studying since she was 7 years old—so the two conversed easily, often long into the night. Jarquin Martinez soon discovered that this American girl was knowledgeable about Spanish architecture, history, and literature. Not surprisingly, they found it difficult to part at the end of her stay.

“We are together because of a monkey!” marvels Jarquin Martinez.

They made their relationship work long-distance for a while, but soon began planning how they could be together again. They knew that it would be difficult for either of them to leave their families and live in a place they knew only a little or not at all. They eventually decided they would try to settle in the US, though the process of immigration is long and not easy. Jarquin Martinez came to the US in 2010, and the couple married shortly after.

Jarquin Martinez found his first year in the US to be very difficult. He couldn’t yet work and communication was difficult. He felt isolated and nearly imprisoned. He missed his family and his old life. What got him through those dark days was his wife and his supportive in-laws. Jarquin Martinez, and his mother, too, are “grateful beyond words” for his supportive spouse and her family.

From the beginning, Jarquin Martinez put effort into improving his English language skills. He studied at the Global Language Institute in St. Paul and took an intensive English program at UMN. His writing developed well with study, and his conversational skills got a real boost when he began working at Lowe’s Home Improvement. The daily, practical interactions with a variety of people built his confidence and fluency. 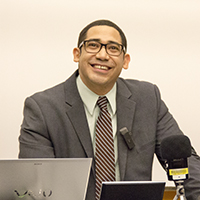 Although Jarquin Martinez had professional architectural experience, the school he attended in Nicaragua was not internationally accredited. He explored getting a Master’s degree in Architecture. But, even though he had gone through the embassy in Managua to certify his credentials, he found he would have to repeat many classes that he had already taken in Nicaragua to work as an architect in the US. Rather than repeat the same material again, Jarquin Martinez decided to build on his experience by pursuing a degree in civil engineering, a major that would challenge him and complement his previous knowledge.

He started in CEGE in the spring of 2015 and completed his degree in 2017. He found the classes intense and rigorous but took pride in working hard and overcoming challenges.

Jarquin Martinez finds that his experience in architecture and his studies in civil engineering are indeed complementary. “Often engineers and builders do not think alike. I hope that my experience on both sides—design and construction—will help facilitate communications.”