MICHELLE MACIEJ credits her family with much of her success. Her mom, Cathy Maciej, is her constant and consistent rooting section. Her father, Gary Maciej, is her number one motivator. He always encouraged her to be the best she could be and never settle for less. Her two older brothers, John and Joe (UMN ’08 Construction Management), challenged her by setting a high bar in both athletic and professional achievement, but Maciej was able to keep up. On her high school track team, Maciej trained with Minnesotan Shani Marks, who went to the Beijing Olympics. Under Marks’ coaching, Maciej became the Minnesota State Champion for Triple Jump in 2009. Maciej continued to compete in the triple jump at UMN.

In spite of the high expectations, Maciej’s family was also supportive and always shared a lot of laughs. Maciej says, “There is never a dull moment and that’s where my upbeat personality comes from.” Her upbeat personality is definitely a factor in the success she has experienced so far and portends more good things to come.

Like many students entering the College of Science and Engineering, Maciej discovered in high school that she was skilled in the highly desired areas of math and science. When Maciej arrived at the University of Minnesota, she was open to exploring several options in engineering, from biomedical to mechanical. She was deliberate and analytical in her exploration. After each course, she would consider her levels of interest and enjoyment, and how satisfying that field would be for her as a career. Being a curious sort, she found that most classes passed on the interest and enjoyment scales, so her vision of her future self often became the deciding factor. “I like to work with people. I like a challenge. I guess I’ve considered all types of engineering at one point!” As she paid attention, the pieces began to fit together.

A friend told her about the broad opportunities available with a degree in civil engineering. Maciej sought out and met with Associate Professor Randal Barnes. She asked several questions about classes and the advisability of switching majors. Barnes helped her understand the demands and rewards of a career in civil engineering. After further careful analysis, Maciej declared a major in Civil Engineering. She has found the program to be a great fit with her skills and interests.

In the civil engineering program all students are required to have a broad foundation in five essential areas: environmental, geomechanics, structures, transportation, and water resources. After establishing this base, students can focus their elective classes to develop a specialization. Because of this approach, Michelle Maciej—like all UMN graduates— will graduate with strong abilities in engineering fundamentals.

“THE CIVIL ENGINEERING DEPARTMENT IS 100 TIMES BETTER THAN OTHER DEPARTMENTS I’VE EXPLORED. THE STAFF AND FACULTY ARE REALLY HELPFUL AND HELP CONNECT ME TO A LOT OF THINGS. THE STUDENTS ARE GREAT TO WORK WITH.”

Within her Civil Engineering major, Maciej continued to explore options for specialization by talking with professors and getting involved in student organizations. Maciej declares that talking with professors was perhaps the most helpful activity of her time at UMN. “Professors helped me through everything and connected me with other people, with opportunities in school, and with jobs.”

Maciej has a lot of natural abilities, but she also worked hard for her success. She has some practical suggestions to help other students be successful. One of the simplest: sit in the front of the class. Maciej was required to do so as a member of the track team, and she learned to like it! “It keeps me attentive—and the professors recognize your face. I know almost everyone in the building, now, and it is fun to see people and say ‘Hi’ throughout the day.”

She also encourages students to go to professors’ office hours. “In challenging courses, I would talk to the professor a lot. Solid waste was a challenging course for me, and I got to know Professor Paige Novak very well! Even if you don’t need help in the course, go to office hours at least once or twice just so they know who you are.”

Maciej made special connections with several of her teachers. Ann Johnson, who teaches about highways and has her own consulting company in construction management, knew Maciej’s brother Joe from his time at UMN. Professor Barnes was the first person Maciej connected with in Civil Engineering. She also had him for two challenging classes, statistics and computer applications. “I was in his office almost every day for those classes! I am not afraid to ask questions, and Barnes appreciated that. He once wrote me a recommendation and said I was not afraid to admit ignorance—I guess he meant that in a good way! I learn a lot by asking questions.” 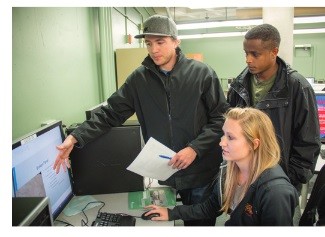 Professors also opened Maciej to other opportunities. Professor Joe Labuz hired her to organize the 61st Annual Geotechnical Engineering Conference held on campus in 2013. “That experience exposed me to more people and made me think more about geotechnical engineering,” says Maciej. She was responsible for “basically everything” dealing with conference arrangements. She contacted speakers, collected papers, produced the proceedings book, and registered all 260 attendees. She is also working on the 2014 conference and training someone new to take over.

“I enjoyed going to the conference and meeting people I’d worked with over the phone. The last week before the conference, I was quite stressed, trying to get everything ready and keeping up with school. One of the conference sponsors had contacted me to say I was doing an awesome job. That was great to hear because I didn’t know how it was all going, so it was great to meet him at the conference.”

Professors were also helpful in connecting Maciej with internships. One thing she learned is that her interactions with professors helped them to write good recommendation letters and to lead her to appropriate and advantageous internships. “My internships really helped me understand the kind of work a civil engineer does. My first internship was with Cretex Concrete Products. I learned about storm sewers and sanitary sewers. I did some inventory, which helped me learn about the concrete parts they sell and how much steel and rebar is needed for different projects. After my internship with Cretex, I thought I would like structural engineering. I became interested in pavement and concrete, too, through my work at Cretex.”

When it came time for her second internship, Maciej had several options in municipal, transportation, and environmental areas. “I had gone to a career fair, and several companies contacted me after that. All the options were interesting—it was a very tough choice.” She chose to work with the municipal engineering group at WSB & Associates, Incorporated.

Municipal engineering, Maciej discovered, includes a variety of work: water resources, storm sewers, building of roads, transportation, and the design of these things. “As an intern, I got to work on feasibility reports, to determine, for example, if the city would be able to fund a whole project. I also did some computer aided design (CAD) work. With the water resource group, I took water samples out of storm sewers and determined if the water needed to be treated. I designed a storm sewer on an Excel ® sheet; I didn’t design the actual sewer, but I helped the team determine what to design, the specifications, etc. I definitely learned a lot! They inquired about me coming back after graduation, so I guess that means I did a good job!”

In addition to her studies, Maciej found time to get involved with some extracurricular activities. Her track experience gave her some valuable lessons that she now applies to her academics and will apply to her career. “Being on the track team made me more accountable—I had to do well in my classes to stay on the team. I also helped a lot of people on my team who were struggling with their math and science classes. My track experience pushed me to do a lot of different things. Every year we put on a Hope Festival, a carnival for kids with cancer and other terminal illnesses. I loved track and I loved competing. I miss being on the track team.” Maciej had to give up track competition when she was injured, but discovered a positive even in that. “Being in a sport taught me how much I had to be involved to be good in my sport and succeed. I applied that same level of dedication to my involvement in Civil Engineering, and it has been great.” She began to spend more time in Civil Engineering activities and the ASCE student group. 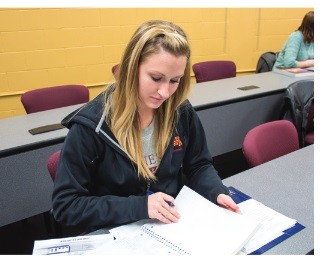 The student chapter of ASCE helps students make connections between course work and professional applications. Students support one another through tutoring groups, social events, and professional networking. Maciej helped organize the ASCE Brown Bag Sessions, weekly informal conversations over lunch. She coordinated with companies coming to campus, for example, the City of Minneapolis came and talked about possible internships. Sometimes professors would talk, which helped students understand and keep up with research trends. Both types of events proved to be an excellent way to build professional networks.

Outside of school, Maciej participates in the International Concrete Repair Institute (ICRI). “I was introduced through one of my dad’s friends, Terry Babcock, who works at CMI (Construction Midwest, Inc.) and is a board member of ICRI. I attend meetings and sometimes work special events, like their golf event last summer.”

Maciej’s many activities and connections also served to bring her to mind when someone was needed to speak to alumni about student experiences or to escort visitors on campus. On one occasion, she toured alumnus Bret Weiss (BCE ’87) and his nephew on their campus visit. Weiss, who is now the president of WSB & Associates, remembered Maciej when she interviewed there for an internship.

“I LIKE HOW THE CE BUILDING WORKS, HOW ALL THE PROFESSORS ARE ALL PRETTY CLOSE. IF YOU HAVE A QUESTION, THEY ARE CLOSE ENOUGH WITH OTHER PROFESSORS THAT THEY CAN TELL YOU WHO TO TALK TO. I ALSO LIKE WORKING WITH OTHER STUDENTS DOWN IN THE LOUNGE.”

In her time at UMN, Maciej pursued many opportunities and delved into multiple aspects of civil engineering to determine her best path. Her approach to this decision displays how her personality and skills will help her be successful as a civil engineer. Maciej will graduate in December after four and a half years. She is well-prepared and has several options. “I’m feeling excited about graduation. A couple of companies have contacted me—some where I worked or applied as an intern and some that contacted me through LinkedIn. I am looking for something that will allow me to do all that I am interested in! Municipal engineering seems like a good fit because of the variety it offers.”

Maciej’s talents, broad interests, and solid foundation in civil engineering basics make her a desirable candidate for engineering firms—and a good example of what is possible for students in the Civil Engineering program at the University of Minnesota.