CEGE professors Otto Strack and Randal Barnes both study groundwater, both like math and believe that models are an essential ingredient in engineering decisions, and both believe aquifer depletion is a serious problem. However, each professor approaches the topic from a unique viewpoint, and they often argue about the best approach. Yet about 20 years ago, the two professors began meeting weekly, together with their advisees, for what they called the groundwater colloquium. Most often the topic is mathematical modeling of groundwater. Their collaborations and debates have given rise to two lines of attack.

Not many people realize how important groundwater aquifer levels are going to be, or how quickly they decline. I am convinced that the groundwater problem is going to hit us long before climate issues do. The acceleration of groundwater pumping will catch up with us very quickly.

Farms are the big concern. Irrigation is possible because the aquifers are accessible. The farmer just drills a hole, puts in a pump, and can irrigate. But as aquifer levels go down, it becomes harder and harder to irrigate.

It is true that the hydrologic cycle is closed and water is not lost, but it can become unusable or unavailable for irrigation. The increase of intense rainfalls and the practice of using drain tile to control water levels in irrigated fields sends a lot more water to runoff. Thus, infiltration is decreasing. If pumping goes up, aquifer levels will go down and less groundwater will be available for irrigation. Without aquifers, getting water to farms would be prohibitively expensive because farms are far apart and transporting water is costly. Groundwater does not require transportation.

The problem is not drinking water—we can clean effluent, as is done in San Diego, for example. Drinking water is not a problem because the quantity is so much less and the users are grouped close together.

When the aquifers are gone, we will not be able to farm, at least not with irrigation. That is what happened in southern Kansas. Depletion of the Ogallala Aquifer is affecting farming and economics in that area. Kansas faces serious problems. In Minnesota, it is not quite so bad, yet.

Farmers say, “We know we are drawing down the aquifer, but what other option do we have? How can we farm without water?” Without water, we cannot farm. We can, however, have fewer cows. We can use our resources more carefully. Reducing the size of farms is a choice. Right now we are in a state of denial, but reality is going to catch up. Drawing down the aquifers is a hard “not possible.”

One solution might be changing the laws, but before that we have to raise farmers’ awareness. Modern machinery is incredibly efficient. Once the farmers have the machines, they can deal with a lot of acreage. So, they are tempted to grow. Farm volumes increase and water needs also increase.

We have to tell the stories of farmers who have experienced a lack of water. I talked to a farmer in Idaho who lost 1,000 steers in one year due to lack of water. All he had left was a flock of sheep, which he couldn’t afford to ship. So he drove his sheep—the old-fashioned way, cross-country all the way to Texas! This farmer has experienced the consequence of drawing down our aquifers. These are the stories we have to tell.

Continuing these large, sophisticated farms is difficult. Farmers need 2-3 years warning to make changes to their operations. We need to warn them: If you want your family farm to continue, adjust the size of your farm now, reduce the number of cows now!

Another way to move this issue forward is to help farmers think about what can be done. We have complicated hydrologic models, but such models are difficult to build, the data is difficult to gather, and the results are difficult to understand. The focus of my research is developing a relatively simple model that can be implemented with minimal data, yet could still give relevant answers. 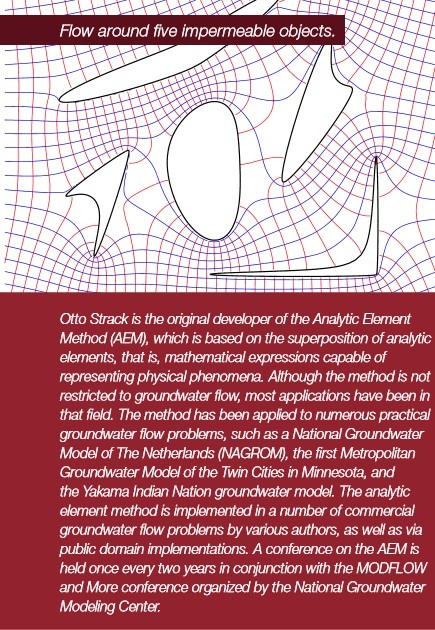 I propose to choose a given area, a farm or town for example, and focus on the amount of water entering through recharge and irrigation. Simple models could be developed that require a minimum of hydrogeologic information; farmers could run such models themselves. The modeling approach that I pioneered, the analytic element method (AEM), is ideally suited to build and distribute such simple groundwater models.

My approach will help farmers to see for themselves the effects irrigation, well discharges, and well placements would have on groundwater flow. These areas can also be linked together to obtain a larger-scale picture of agricultural practices. AEM models will be sufficiently simple so that farmers can run them, yet they will provide important insights for water management.

Farmers will be able to monitor water levels for themselves: “Here is what is going in; here is what is going out. Last year the water level was two feet higher.” Then with that information, they can begin to reason: “If this pattern continues, in five years I won’t be able to pump at this rate.” If a unit is consistently using more water than is being replenished, that would signal a problem. Realistic farmers will make necessary adjustments.

Strack and Barnes may disagree about approach, but they agree on key points about groundwater. All actions have consequences. If groundwater depletion is to be stemmed, we have to take action now. If no action is taken, none of us will be able to continue using water as freely as we have. They both agree that positive action is possible.