CEGE professors Otto Strack and Randal Barnes both study groundwater, both like math and believe that models are an essential ingredient in engineering decisions, and both believe aquifer depletion is a serious problem. However, each professor approaches the topic from a unique viewpoint, and they often argue about the best approach. Yet about 20 years ago, the two professors began meeting weekly, together with their advisees, for what they called the groundwater colloquium. Most often the topic is mathematical modeling of groundwater. Their collaborations and debates have given rise to two lines of attack.

Groundwater can be an uncomfortable issue because of the possible consequences or required fixes. People do not like being told to restrict their water use.

One area of concern is that in the Twin Cities, twice as much water is being pumped out of aquifers in June, July, and August than in December, January, and February. Most golf courses have their own heavily- regulated, monitored wells, so they are not part of this equation. Looking only at domestic use, we see twice as much pumping in the summer. One cause might be that many urban communities require residents to have lawns and to mow weeds. Short, green lawns are embedded in our laws, and those lawns require water in the summer. It may not be as much as agricultural use, but it adds up and depletes urban aquifers

Another concern raised in the Twin Cities is the issue of “mining” groundwater. White Bear Lake (WBL), for example, saw historic low levels two years ago. Other lakes in the area are seeing dropping levels, too, but WBL, with its many homes, is getting a lot of attention. The White Bear Lake Restoration Association is suing the DNR claiming that the DNR has given out too many well permits, depleting the aquifer below WBL. The DNR argues that aquifer depletion is not the problem. My students and I have been studying the lowering lake level since well before the lawsuit was filed.

Coming To A Head

The issues around WBL’s water level are related to a concept called head. Daniel Bernoulli, the famous scientist-mathematician, said we need to look at a combination of pressure and elevation to understand groundwater flow. In a swimming pool, for example, the pressure at the surface is essentially zero or same as the atmosphere. If you go to the bottom of the pool, the pressure is greater; you can feel that in your ears. So, if water flows from high pressure to low pressure, why doesn’t the water flow up out of the swimming pool? Water flows—not only from high elevation to low elevation, nor only from high pressure to low pressure. Both elevation and pressure have to be considered. That is head. Water flows from high head to low head. Head is at work in WBL. 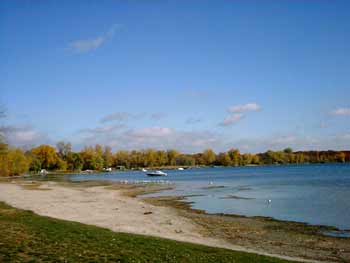 Most lakes have visible inflow and outflow, but WBL is unique in that it has no streams. It is replenished only by rainfall; water leaves only through evaporation or through its “leaky” layer—a layer of clay and glacial till-type material that sits between the bottom of the lake and the top of the first bedrock aquifer. WBL has been leaking slowly throughout the recorded history of the area.

Essentially what has happened recently at WBL is that pumping has reduced the pressure pushing up, thus reducing the head in the aquifer. Pumping has not drained the aquifer, the aquifer is still fully saturated, but the pressure has been reduced, so the lake surface level falls.

Aquifers As A Resource

Like all natural resources, aquifers can have many purposes. It may be that our current use of groundwater in the Twin Cities is what the majority wants. It is not up to me to dictate how we use our aquifers. My concern is to help people understand the consequences of their choices and actions.

Difficulty comes in because we cannot be certain about consequences in a geologic setting. No magic device can tell us what is going to happen under the surface of the earth. Another difficulty is that the world continually changes—climates change, populations change, values change. Add to that predictions about anthropogenic climate change, and there is a lot of uncertainty.

People like to think that the world is a steady state, and when things are good, they can stay good. I see the world as constantly changing. My area of expertise is helping people understand consequences and the certainty, or uncertainty, of those consequences. I do this through probability and statistics and by incorporating uncertainty into geological/mathematical models.

I am concerned that within Minnesota, some groups are worried what might happen if aquifer depletion issues are discussed openly. In Western Minnesota, there is concern about what would happen if limits were placed on irrigation. Cities are concerned that water use might limit growth. But we need to talk about groundwater allocations, inconsistent water laws, and how much water is pumped and from where. The Minnesota legislature should give more consideration to changing water laws. I see some shift; some people are aware, now.

I try to help students converse about these issues. In Uncertainty and Decision Analysis, we discuss how to communicate concepts of uncertainty to people without the same quantitative background. For example, talking about probabilities as odds or giving predictions as a range to communicate how certain or uncertain a prediction might be. We talk about the value of a model when the inputs are uncertain, as in geological settings. Models don’t allow us to make perfect predictions, but can allow us to answer ‘what if’ questions. As a university professor, I do not want to dictate right actions; I want broader discussion.

Some issues are technical, but fundamentally, we have a clash of values about water: how will we value the beauty of a lakeshore compared to drinking water? How will we regulate which farms get water? We need broader discussion about groundwater, values, actions, and consequences. Then it is up to legislators, who represent the values of their constituents, to determine actions.

Strack and Barnes may disagree about approach, but they agree on key points about groundwater. All actions have consequences. If groundwater depletion is to be stemmed, we have to take action now. If no action is taken, none of us will be able to continue using water as freely as we have. They both agree that positive action is possible.