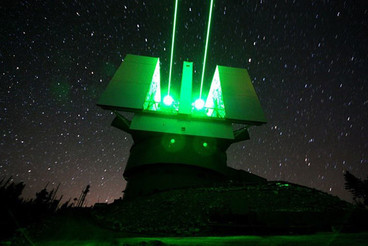 Professor Coughlin's group is actively involved in the development of optical instrumentation for follow-up of survey systems such as the Zwicky Transient Facility (ZTF) and the Vera C. Rubin Observatory. In addition to developing photometric calibration systems for these surveys, the group develops instrumentation to perform rapid and sensitive photometric measurements of several classes of objects such as compact binary mergers and white dwarf binaries. Prof. Coughlin is project scientist for the Kitt Peak Electron Multiplying CCD (EMCCD) demonstrator (KPED), an instrument consisting of an EMCCD and a filter wheel, on the Kitt Peak 84 inch telescope. The goal for the system is to allow for high cadence photometry with a large field of view with seeing-limited image quality. The group is involved in the development of the next generation of instruments for this telescope, a combination of a low-resolution spectrograph with a high-cadence EMCCD photometer, known as the SED Machine, an evolution of a first system on the Palomar 60 inch.

Gehrz is an expert in infrared ground and space-based observational astrophysics, instrumentation development, and telescope construction. His primary research is on the physical properties of astrophysical grains in interstellar, circumstellar, and solar system environments, the physics of nova explosions and their chemical contributions to the interstellar medium, the physical characteristics of the circumstellar ejecta of luminous evolved stars, the infrared morphology of regions of star formation, and the infrared activity of comet nuclei.

I build instruments for deployment on ground-based telescopes such as the Large Binocular Telescope and the MMT. My research covers a broad range of topics, but I specialize in infrared imaging and astronomical polarimetry. Recent instrument projects include LMIRCam, the 2-5 micron imager on the LBT and MMTPol, the 1-4 micron imaging polarimeter on the MMT. With these instruments, I study dusty hypergiants, very young stars, and extragalactic sources.

Woodward is an international expert in XUVOIR ground, and space-based observational astrophysics, instrumentation development, and telescope construction, management, and operations. He also has significant experience in national space policy. His primary research is on the physical properties of astrophysical grains in interstellar, circumstellar, and solar system environments, the physics of nova explosions and their chemical contributions to the interstellar medium, and the IR activity of comet nuclei and small solar system bodies. He played a significant role in the programmatic development of the NASA’s Spitzer legacy science opportunities and has participated in mentoring programs to enhance diversity in the field of astrophysics. Woodward is also a member of a JWST GTO team. His research is supported by the NSF and NASA.