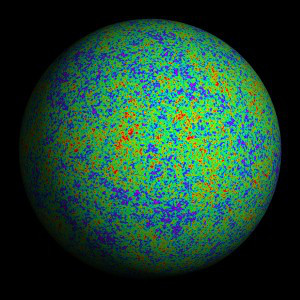 Particle astrophysics and cosmology is a growing field of research at the University of Minnesota. This research includes searches for high energy cosmic rays, experimental studies of cosmic microwave background radiation, observations and theoretical models of galaxy and galaxy cluster formation, research into the formation of the first stars and metal abundances at high red-shifts, theoretical studies of big bang nucleosynthesis and early universe physics, theoretical work in nuclear astrophysics, work on gravitational lensing, and laboratory searches for dark matter and gravitational waves.

My research focuses on using multi-messenger astronomy to study the Universe, coming at the same problem from multiple directions to gain a more complete picture. In particular, I study the coalescence of binary neutron stars with both gravitational waves and electromagnetic data, predominantly using wide field-of-view optical telescopes such as the Zwicky Transient Facility (ZTF) to identify these counterparts. I also use these telescopes to search for future sources from the Laser Interferometer Space Antenna (LISA), a space-based gravitational wave detector that will study white dwarf binaries in our galaxy as well as binary black hole mergers.

My focus these days is trying to understand the nature of dark matter through direct detection of it as it rains down on us here on Earth. My previous experience in accelerator-based physics informs the design of the detectors and facility. SuperCDMS is a particle physics experiment where the particles are provided by the dark matter that permeates our galaxy and the kinetic energy is provided by the motion of our solar system through the dark matter cloud. An upgraded SuperCDMS experiment is being installed at SNOLAB, an underground lab 2 km below the Earth's surface in Sudbury, Canada. You can read more about the science and the experiment at the SuperCDMS Website. Students in my group are involved in all aspects of the experiment from taking data at SNOLAB, to analysis and simulation, to novel detector development in the optics lab and the cryolab.

The VERITAS (Very Energetic Radiation Imaging Telescope Array System) is a set of four 12 meter telescopes located at the Whipple Observatory near Tucson, AZ. They are sensitive to the ultraviolet Cherenkov radiation emitted as a by-product of the air showers generated from gamma-rays hitting the Earth’s atmosphere. By geometrically combining the camera images of each telescope’s “perspective” on the air shower, the array can reconstruct the energy and direction of the originating gamma ray. VERITAS is sensitive to gamma rays between 85 GeV and 30 TeV and as such detects some of the highest energy photons emitted in the Universe. Thus, very high-energy (VHE) gamma-ray astronomy probes the extreme physics of systems such as pulsars or the remnants of supernova explosions in our galaxy or even searching for indirect detection of dark matter through annihilation into gamma rays. Work at UMN focuses on Active Galactic Nuclei (AGN) which are cores of galaxies believed to contain supermassive black holes accreting matter and powering kiloparsec-scale jets of relativistic particles that generate non-thermal emission which often outshines the host galaxy. To date, all but five of the 72 AGN detected at VHE energies are blazars – AGN where we view the jet nearly along its axis; the other five are Radio Galaxies. Radio galaxies are blazars with jets viewed at systematically larger angles to the line of sight than blazars, these objects are inherently more challenging to detect at VHE due to decreased Doppler boosting. Obtaining a larger sample of VHE-detected radio galaxies will allow further study of a range of important topics that have proven difficult to resolve with pure VHE blazar observations alone including the location(s) of gamma-ray emission in radio-loud AGN as well as acceleration mechanisms and the linkages between classic radio galaxies and blazar populations.

We are building instruments with which we observe the cosmic microwave background radiation (CMB). The CMB is a relic remnant from the big bang. Detailed characterization of the properties of the CMB have given, and will continue to give tremendous amount of information about the evolution of the universe. By 'evolution of the universe' we mean: throughout most of the age of the universe, from immediately after the bang until galaxies and clusters of galaxies formed. 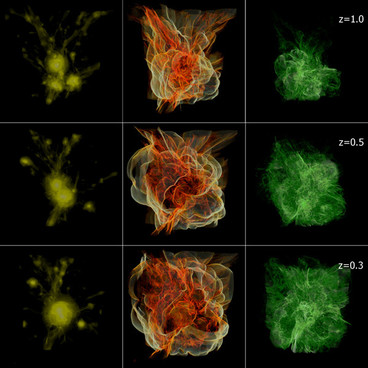 I am a theoretical astrophysicist whose efforts center on dynamics of fluids, turbulence, plasma processes and associated acceleration, transport, and emissions by energetic particles (cosmic rays) in multiple contexts, including large-scale structure. Most of our work incorporates numerical simulations of the phenomena under study. These include the simulation of the dynamics of galaxy clusters as they collapse, accrete and merge from the Hubble expansion. We focus much of our attention there on the interplay of shocks and turbulence, which are the primary means of energy dissipation by baryons during cluster formation. The example figure illustrates at three times during the formation of one simulated cluster the spatial distributions of baryonic matter, shocks, and turbulence.

My research focuses on supernova (SN) explosions and gravitational lensing by galaxies and galaxy clusters. Supernovae (SNe) offer the opportunity to study the deaths of individual stars far beyond the local universe, and thermonuclear SNe Ia are excellent tools for measuring the expansion history of the universe. Recent work includes the discovery of an individual, luminous blue supergiant star at redshift z=1.5 (a look-back time of 9.3 billion years) which is highly magnified (~2000 at peak) by a foreground galaxy cluster. The star's microlensing flux variations offer a new window into the nature of galaxy-cluster dark matter, the initial mass function, and the evolution of massive stars. The blue supergiant star was found in the same lensed galaxy where the first-known multiply imaged, strongly lensed SN (dubbed SN Refsdal) appeared in late 2014 in an Einstein cross configuration. The timing of a subsequent reappearance of the SN, at an offset of ~8 arcseconds from its original location, in 2015 disagrees with most but not all predictions, and illustrates a promising approach for identifying the most accurate cluster-modeling techniques and magnification maps.

Pryke is an experimental cosmologist and educator. His research currently centers on the cosmic microwave background (CMB) - the after glow from early times when the Universe was a smooth hot plasma. By studying the CMB we can learn much about the origin, contents and ultimate fate of the Universe - CMB studies are at the center of the current "golden age" of cosmology. Pryke has played a leading role in the construction and operation of a series of CMB telescopes cited at the South Pole in Antarctica, and the analysis of the data they produce. He was a key member of the DASI team which produced the first detection of the polarization of the CMB. He then went on to co-lead the QUaD experiment - another ground breaking CMB polarimeter. Currently he is co-leading the BICEP/Keck experiments which take sensitivity to the next level in the quest to detect gravity waves spawned by inflation in the first instant after the big bang.

The universe today is expanding and cooling. At very early times (shortly after the Big Bang), the universe was hot and dense, and the energy available for particle interactions far exceeded that of any terrestrial accelerator. In this sense, the early universe becomes the ideal laboratory for studying high energy physics. Questions relating the grand unification of particle interactions and the matter-antimatter asymmetry can be addressed in the context of the very early universe. This asymmetry is but one example of the necessity for physics beyond the standard model. Dark matter is another and its origin is inevitable to be found in the early universe. Constraints on the physics beyond the standard model are also available from the well-established theory of Big Bang nucleosynthesis.

My research aims to answer the following questions: (1) How were the chemical elements produced in the universe? (2) How did the universe get enriched in these elements? (3) How did galaxies form? (4) How did fundamental particles, especially neutrinos, influence the above processes?

I have been measuring helium abundances in extremely metal-poor galaxies in order to determine the primordial helium abundance. This consists of discovering extremely metal-poor galaxies and obtaining optical and near-infrared spectra of their star-forming regions (using the Large Binocular Telescope) in order to measure their H and He emission lines. The relationship between He abundance and O abundance allows us to extrapolate back to the primordial He abundance, which is an important cosmological constraint.

Most of my work has to do with dark matter: measuring the amount, and, more importantly, its spatial distribution on a wide range of astrophysical scales, from sub-galactic to super-cluster. Detailed knowledge of dark matter distribution will enable us to place constraints on the physical properties of dark matter particles. Since dark matter is invisible, mapping out its distribution must rely on indirect methods. While a few mass reconstruction methods exist, gravitational lensing is the optimal one, as it does not rely on any assumptions about the physical state of the dark matter or the light emitting matter. Another interesting aspect of the dark matter is the study of its dynamics in galaxies and clusters of galaxies. In the last decade, we have learned much about the properties of relaxed dark matter halos from numerical computer simulations, however, understanding the physics behind these results is still an open issue. This is the other major direction of my research.