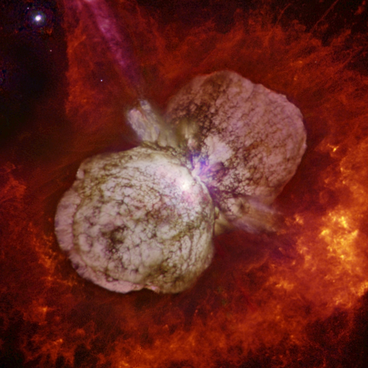 Professor Kris Davidson leads the Hubble Treasury Program on Eta Carinae, the most massive and luminous star in our region of the Milky Way. This program is one of the most intensive spectroscopic projects undertaken with the Hubble Space Telescope. Other studies of massive stars focus on the final stages of evolution, with attention to particular objects. We are also involved in many other exciting programs (including some with guaranteed time access observations on the Spitzer Space Telescope).

In astrophysics, one superb example is usually worth hundreds of objects that have "ordinary" data -- and often far more than that. Meanwhile, the most extreme or most exotic objects can give clues that we won't find elsewhere. That's why I've concentrated on non-routine, exceptionally significant objects, special sets of objects, and puzzles. Decades ago this meant quasars, pulsar dispersion measures, compact X-ray sources, cocoon stars, and non-thermal photoionization models -- all new topics at the time, and I originated some of the concepts that later became standard. In recent years, though, I've focused on giant stellar eruptions ("supernova impostors") because frankly, they're more mysterious than ordinary supernova explosions. No one knows exactly what causes a giant eruption, but the instability almost certainly involves radiation pressure. Within this topic, I have obtained most of the successful HST spectra of Eta Carinae, the extremely massive star which is our only well-observable supernova impostor. (An interesting aspect is that we had to push the instrument's capability envelope, far more than most HST programs.) Eta Car is not a specialized topic; it embraces stellar structure and instabilities, super-Eddington wind acceleration, exotic emission processes seen almost nowhere else, binary-perturbed gas flows with a broad range of velocities, special data reduction tricks, and other matters both theoretical and observational.

My research focuses on the most massive stars and the final stages in their evolution before the terminal explosion or collapse to a black hole. With their very short lifetimes and high mass loss events, we observe changes in their properties during the course of a human lifetime revealed by spectroscopy, multi-wavelength photometry, and imaging with the Hubble Space Telescope, the Large Binocular Telescope, and other ground and space-based observatories.

Professor Paul Woodward uses large-scale computer simulations of deep stellar interiors to investigate brief events in stars, lasting from days to months, where the one-dimensional descriptions of stellar evolution codes cannot provide an adequate description. This work, in collaboration with Professor Falk Herwig of the University of Victoria, focuses on details of mixing processes at the boundaries of convection zones that can profoundly influence the evolution of the star by carrying nuclear fuels into regions where they can burn semi-explosively. Such events occur in late evolutionary stages. For massive stars, they have the potential to strongly affect the ultimate supernova explosion. Recent application of Woodward’s simulation codes to massive main sequence stars, with spherical core-convection regions, addresses the ingestion of additional hydrogen fuel into the central burning region, which prolongs the star’s life on the main sequence. These more quiescent simulations (see figure) allow us to predict the spectrum of gravity wave disturbances, driven by the convection, that reach the star’s surface. These disturbances are observed by exoplanet-seeking satellites like TESS. This asteroseismology provides the opportunity for observational evidence of the behavior and structure of the deep interior of stars. The simulations can connect the observations to the interior structure of the star, allowing us a check on the correctness of the stellar models. 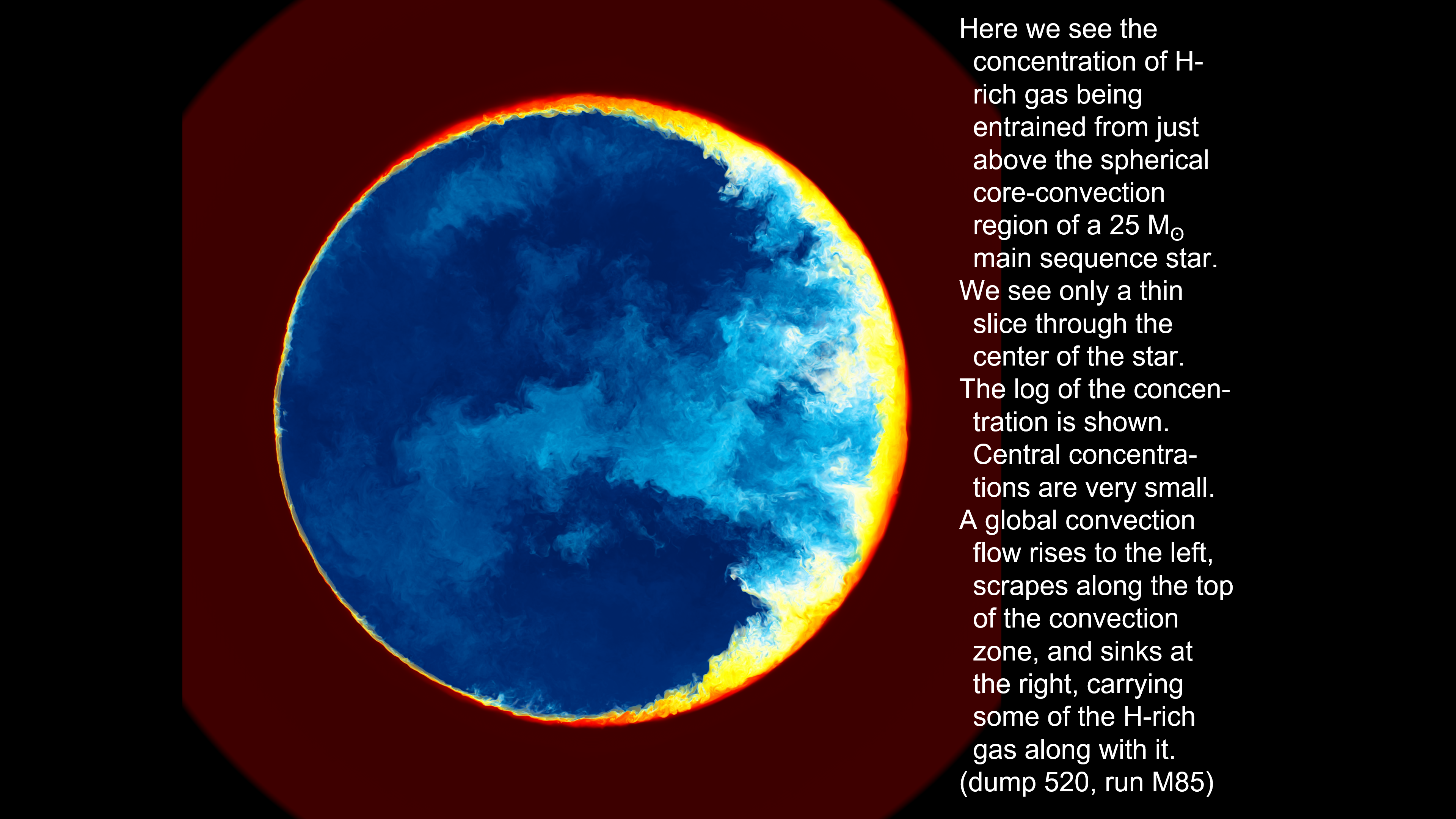