Galaxies & Clusters and the Interstellar Medium 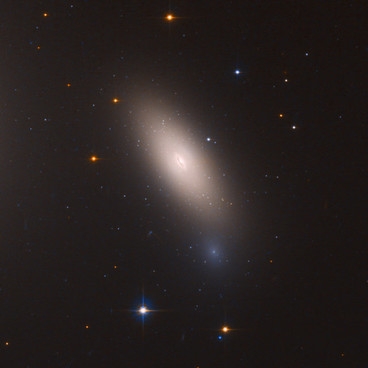 I am a theoretical astrophysicist working primarily on problems that involve study of fluid dynamics, turbulence, plasma processes and the resulting acceleration, transport, and emissions of high energy particles (cosmic rays). Our focus includes the formation of galaxy clusters and diagnostic signatures of the dynamics of the hot plasmas that fill the clusters. Much of our work involves numerical simulations. The example image is a volume rendering showing the distribution of magnetic field in a 3D MHD simulation of a radio galaxy that has encountered a strong crosswind, as is common for radio galaxies in clusters.

I am interested in clusters of galaxies, their origins out of large-scale structure and their continuing evolution. My focus is on the intracluster medium, which I study through the accompanying radio and X-ray emission. I am also interested in radio galaxies, both in and out of clusters, how they evolve and interact with their surrounding medium, and how we can use them to probe the cosmological evolution of the ionized intergalactic medium I am involved with several next-generation radio surveys using total and polarized intensity emission to study these questions.

Dr. Scarlata's research focuses on the poorly-understood balance between gas inflow (accretion of gas from the circumgalactic medium), outflow (energetic feedback into the interstellar medium due to stellar winds, supernova explosions, and black-hole activity) and gas consumption rate (star-formation). This energy exchange determines the physical properties of the gas (e.g., temperature, density, kinematics) that shape the mass-metallicity relation and the galaxy luminosity function, enrich and pollute the intergalactic medium, and regulate the transport of ionizing photons.

I have been using the Hubble Space Telescope to study the resolved stellar populations of nearby galaxies. These observations allow the reconstruction of the star formation histories of these galaxies. For the dwarf galaxies, we can look for the imprint of the epoch of reionization. I have also been using the Large Binocular Telescope (LBT) to derive chemical abundances from star-forming regions. Using the Multi-Object Double Spectrograph (MODS) on the LBT allows the simultaneous measurements of dozens of star-forming regions in spiral galaxies so that we can measure the gradients and dispersions in their chemical abundances.

The structure of the innermost regions of galaxies is hard to resolve for all but most nearby galaxies. For distant galaxies, one has to rely on indirect means, like gravitational lensing. My work uses multiply imaged quasars to map out the structure of the central regions of galaxies, and to elucidate the interplay between their stars and dark matter.