Professor and Edson Spencer Endowed Chair in Strategy and Technological Leadership Alfred Marcus received the 2022 Distinguished Scholar Award from the Academy of Management Organizations and Natural Environment Division (ONE). Marcus holds a faculty position in the Technological Leadership Institute (TLI) in the College of Science and Engineering at the University of Minnesota, as well as the Carlson School of Management. Prof. Marcus said this of his achievement; “[I feel] very fulfilled. […] an accomplishment of my lifetime”.

ONE division is dedicated to advancing teaching, research, and service in relationships between organizations and the natural environment and offers many awards to its members to recognize remarkable academic accomplishments in this field. The goal of ONE is “to guide businesses and other organizations on re-directing their activities towards sustainability.” 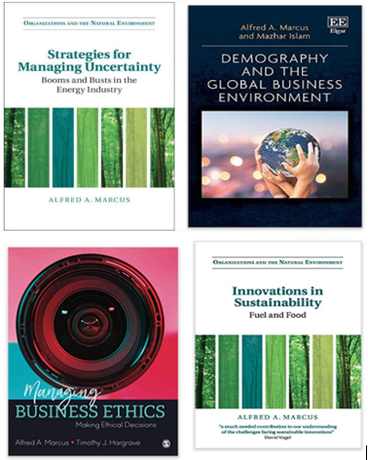 Marcus was a clear choice to win this award due to his varied works on this subject. He is the author of many articles and more than 20 books, many of which focus on the topics of organizations and the environment. Marcus states that two of the projects he is most proud of are “Innovations in Sustainability (won Best Book of the Year Award in ONE Division) and Managing Uncertainty in the Energy Industry. [The] first details entrepreneurship and innovation around cleaner tech second the [outlines] struggles of established auto and oil and gas companies to make [the] transition to sustainability.”

Marcus is a thought leader on the topic of organizations and environment and it’s clear how important this work is to him. During his acceptance speech he stated "Don’t stop now.  Let us hope that our scholarly efforts have an impact. Let us hope that they continue to combine activism with the highest levels of scholarly integrity."

"Persist. Try to connect to the 'real world'. Be idealistic and try to make an impact."

You can read his full speech below:

"It is with great humility that I accept this award. Many are worthy. In accepting it, I would like to say a few words about the development of ONE at AOM. My view puts me at the center therefore it is partial and biased. No doubt, others’ memories would be different, and not so centered on me. Please bear with me.

Let us return to the mid-1980s – virtually no one had written a business and environment case in decades since some early attempts by HBS. In 1991, under the direction of Marc Haveman, the Corporate Conservation Council of the National Wildlife Federation sponsored a casebook published by Prentice Hall and written by Jim Post, Gene Buchholz , and myself, tilted Managing Environmental Issues.

This book was an early opening to the field of organizations and natural environment in business. It had cases on the Amazon Rain Forest, the advance of the Greens in Europe, the Exxon Valdez oil spill, the auto emissions debate, the Clean Air Act, toxic dumps, recycling, waste disposal, solar energy and ozone depletion. It raised a number of issues that remain central to ONE research, including:

We argued that the environment was an opportunity for business. Progressive and forward thinking companies could make environmental protection pay. We argued that it was not it is not a question of either-or. It could be win-win. These issues remains central to ONE scholarship.

Frankly, I no longer care if it is win-win. Businesses as well as governments have a moral responsibility to protect the environment.

Managing Environmental Issues was followed by an avalanche of research and teaching cases, other material, and initiatives related to business and natural environment that went far beyond the book. People like yourselves and others have made business and the environment more of a mainstream topic.

Goaded by Paul Shrivastava, I became a founder of the ONE Division. This was not easy as there was substantial resistance and large amounts of paperwork. I subsequently served a term as Division Chair. The bureaucracy overwhelmed me. If it were not for the able assistance of Tim Hargrave, I would have been sent to a lunatic asylum. The Academy has improved greatly since then.

I am most proud of encouraging many younger scholars, including PH.D students of my own, like Tim, Adam Fremeth, Joel Malen, Gordon Rands, Nick Poggioli, and others. I wrote innumerable recommendation letters for my PH.D students and for many young scholars, maybe some of you in this room or on Zoom. Through your dogged efforts, we created a career path for ONE scholars that many once thought impossible within business schools.

I am envious of your scholarly accomplishments. Your contributions to top conventional and other journals even more interesting are formidable.  No longer is it a surprise that an ONE article is featured in a A+ rated journal. We have made breakthroughs. We are not confined to the margins. Copycats from outside ONE are many. This outcome is wonderful. Nonetheless, there is still so much to be done.

With regard to scholarship, I am most proud of my books Innovations in Sustainability: Fuel and Food and Strategies for Managing Uncertainty: Booms and Busts in the Energy Industry, both of which were published by the Organization and Natural Environment series of Cambridge University Press.. At the time,  I was mainly interested in two phenomena – the birth of interest on the part of venture capital in clean energy and the maturing of sustainability strategies and practices in mainstream companies.

The current book I just completed with ex-PH.D student Mazhar Islam is titled Demography and the Global Business Environment. It is an effort to extend the lessons of sustainability to the topic of population. The prior book I wrote was a textbook with Tim Hargrave on Managing Business Ethics.

Outside books, I have tried to maintain a flow of academic papers. I am very proud of the paper I published in 2020 with Alberto Aragon and David Vogel in   the Academy of Management Annals "The Effects of Mandatory and Voluntary Regulatory Pressures on Firms’ Environmental Strategies." My paper with ex-PH.D student Bill.McEvily, about the acquisition of capabilities for environmental management that appeared in the Strategic Management Journal in 2005, “Embeddedness and the Acquisition of Competitive Capabilities” has been very widely cited. Also well-known is a paper with another ex-PH.D student Sumit.Majumdar in the Academy of Management in 2005 titled “Rules versus Discretion: The Productivity Consequences of Flexible Regulation.”

I cannot review my entire scholarly history. Yet, I would like to go back in time to reveal some of what brought me to this point. My dissertation with J.Q. Wilson as my adviser at Harvard was published as a book in 1980, Promise and Performance: Choosing and Implementing an Environmental Policy. It was about the creation of the EPA and the passage of landmark clean air and water legislation in the early 1970s. In 1999, with Don Geffen, an ex-Physics professor at the University of Minnesota and Ken Sexton, at the time a Public Health Professor, we wrote a book for Resources for the Future/Johns Hopkins Press called Reinventing Environmental Regulation. It was about making regulation flexible and more effective.

In sum, my achievements depend on relationships I have had with outstanding colleagues and students. We are at the beginning of forging a path in which serious research is being done on the grand challenges the planet faces. Don’t stop now.  Let us hope that our scholarly efforts have an impact. Let us hope that they continue to combine activism with the highest levels of scholarly integrity"