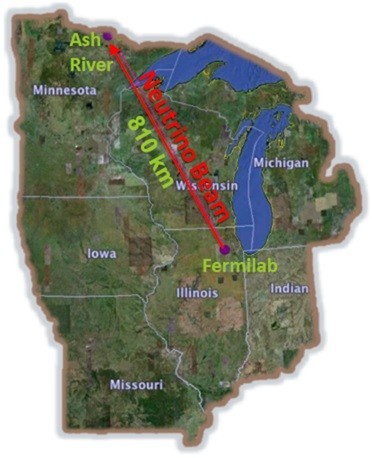 My focus these days is trying to understand the nature of dark matter through direct detection of it as it rains down on us here on Earth. My previous experience in accelerator-based physics informs the design of the detectors and facility. SuperCDMS is a particle physics experiment where the particles are provided by the dark matter that permeates our galaxy and the kinetic energy is provided by the motion of our solar system through the dark matter cloud. An upgraded SuperCDMS experiment is being installed at SNOLAB, an underground lab 2 km below the Earth's surface in Sudbury, Canada. You can read more about the science and the experiment at the SuperCDMS website. Students in my group are involved in all aspects of the experiment from taking data at SNOLAB, to analysis and simulation, to novel detector development in the optics lab and the cryolab.

I collaborate with Professor Vuk Mandic. Together we manage a group of about 5 grad students and 2 postdocs and 3-4 undergraduates. Besides our own facilities, we spend time on SuperCDMS-related projects at Fermilab, SLAC, and the TUNL accelerator. The larger SuperCDMS collaboration of 25 Universities and National Labs provides a rich environment for graduate students who want to learn both the science and the craft of Particle Astrophysics 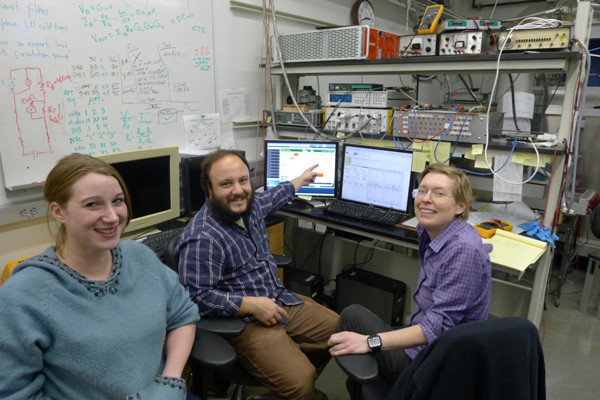 Neutrinos are tiny particles that fill the universe. Billions fly through your fingernails every second. Occasionally, they interact with other things, allowing us to detect them. Because of the rarity of interactions, studying these particles in detail requires huge detectors. I work on a few large experiments developing large liquid argon neutrino detectors. The largest of these is DUNE, which is under construction. It will consist of a beam of neutrinos sent from Fermilab, Illinois, travelling 800 miles across the US to a detector in South Dakota. That detector will be made of 40,000 tons of argon, held in liquid form at -300F, buried a mile underground and instrumented with tens of thousands of sensitive wires to detect signals from neutrinos. We will learn lots about the properties of neutrinos, and hopefully learn about the role neutrinos played in the development of the early universe.

Image Below: Schematic of the DUNE experiment, sending a beam of neutrinos over 1000km across the US, from Illinois to South Dakota.

My current research is probing physics beyond the Standard Model. The two experiments that I am currently working on involve measuring the likelihood that an elementary particle can change its identity over time. Both experiments are international collaborations with important parts of the detector built at the University of Minnesota. The first is the NOvA experiment where neutrinos and anti-neutrinos made at Fermilab are detected at our laboratory in Northern Minnesota. Both the near and far neutrino detectors were built in our labs. Currently we are taking data, using both neutrinos and anti-neutrinos, to measure the properties of neutrino oscillations where muon neutrinos change during their journey to electron or tau neutrinos. The difference between this oscillation rate between neutrinos and anti-neutrinos will shed light on how our highly asymmetric Universe came to be. The second experiment is the Mu2e project that is under construction. This experiment will take place at Fermilab where muons from the world's most intense muon beam will be stopped in an aluminum target. The muons then go into an atomic orbit until they decay. Their normal decay is to an electron, a neutrino, and an anti-neutrino as allowed by the Standard Model. However, many beyond the Standard Model theories allow the conversion of these orbital muons into a single electron without neutrinos. We will search for this conversion at a sensitivity 10,000 times better than previous experiments giving us a probe of energies thousands of times beyond CERNs Large Hadron Collider (LHC). Our labs are building the electron tracker that will determine the signature of the muon to electron conversion, a forbidden peak in the electron energy beyond that allowed by the Standard Model decay spectrum.

I am usually more interested in "bump hunting" which refers to looking for evidence of new phenomena like the discovery of the Higgs particle. I was involved in a search for "long-lived" particles, for example, where unlike most new particles predicted by potential new theories, they live long enough time so that their passage can be traced in the detector. However, recently, I have done more subtle way of looking for new physics via precise measurements which could show a small deviation from the expectation of the current theory alone. For example, we are measuring how the Z boson is produced at LHC along with other known particle(s) but with a hope that their production involves more high-energy Z boson. 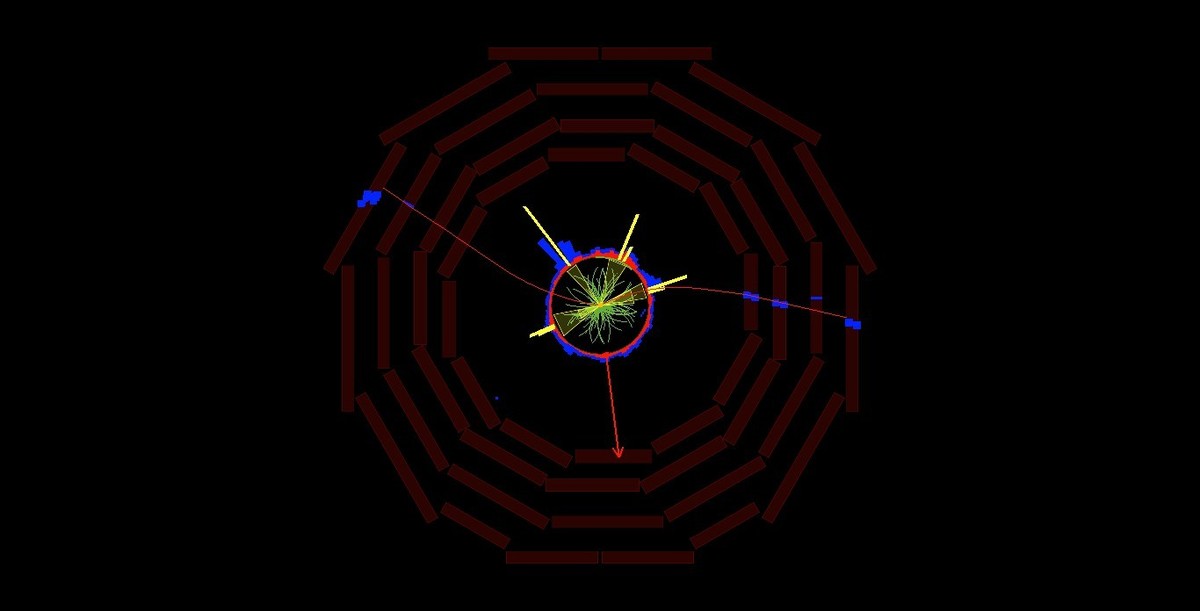 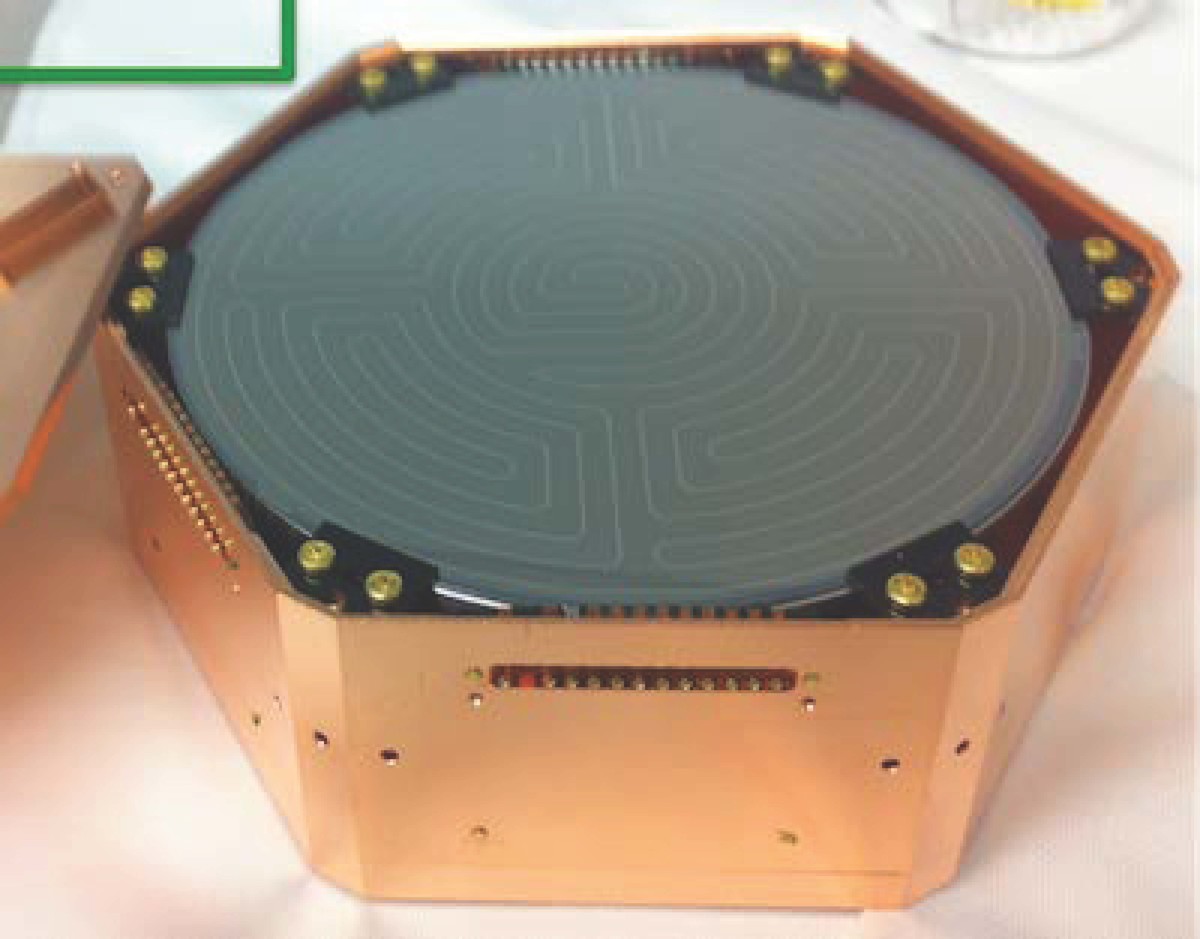 I work on experiments at the intersection of particle physics and astrophysics, and I am a member of SuperCDMS and Miner collaborations aiming to detect dark matter and coherent neutrino scattering, respectively. In particular, my group focuses on developing cryogenic semiconductor detectors that measure ionization and phonon signals released when a particle interacts inside of our detectors. The detectors are based on crystals of germanium or silicon, and are operated in dilution cryostats at temperatures near 30 milliKelvin. We pursue detector R&D together with our collaborators, and contribute to developing detector payloads for upcoming observation runs of these experiments. My group also contributes to different data analysis efforts, ranging from machine learning techniques to optimally extract event information from our detectors to multi-nesting Bayesian techniques to estimate implications of dark matter searches for various dark matter models. 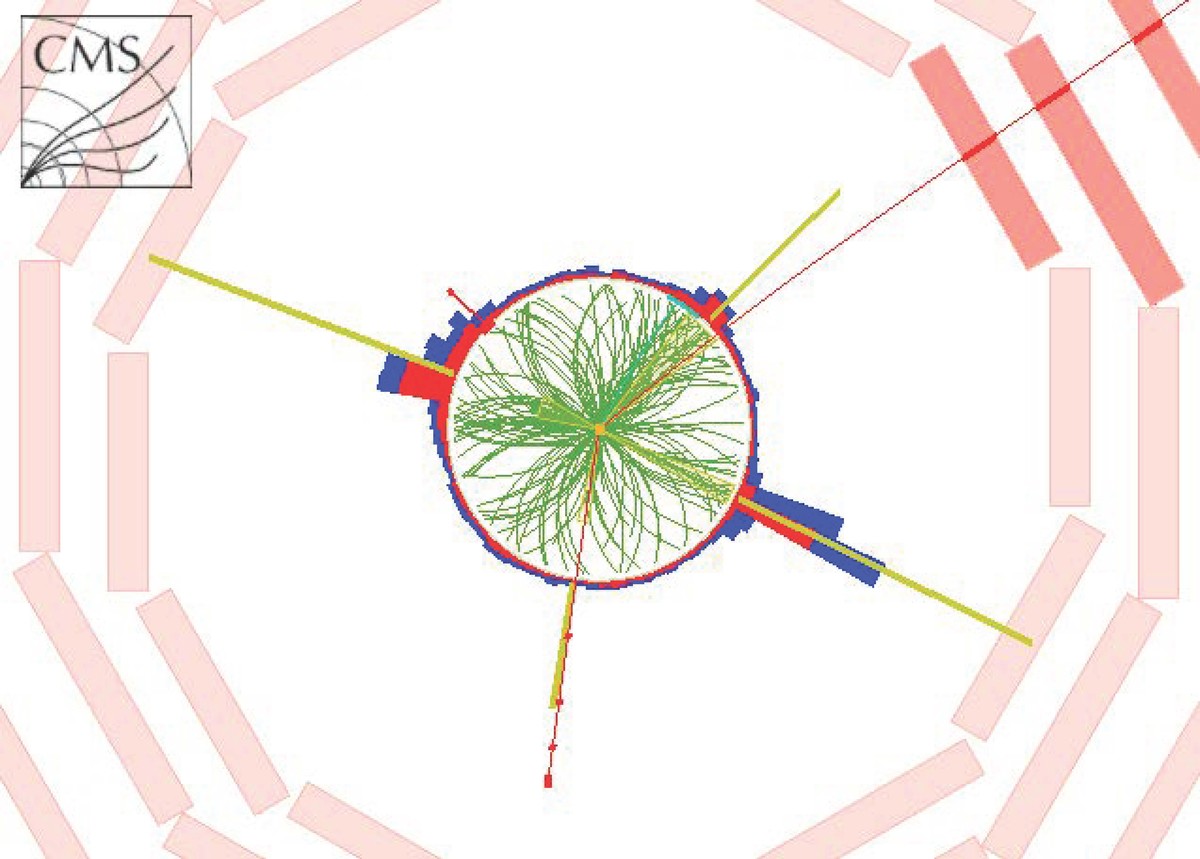 I work on experimental collider and fixed-target experiments. At the LHC, my group studies the nature and structure of the proton and looks for production of new particles in collisions inside the CMS detector. We are developing a remarkable new calorimeter which will provide 3d information about particle showers for an upgrade of the CMS detector -- the first time such precision information has ever been available in a hadron collider. My group also works on new experiments to search for dark matter produced in electron fixed-target beams. 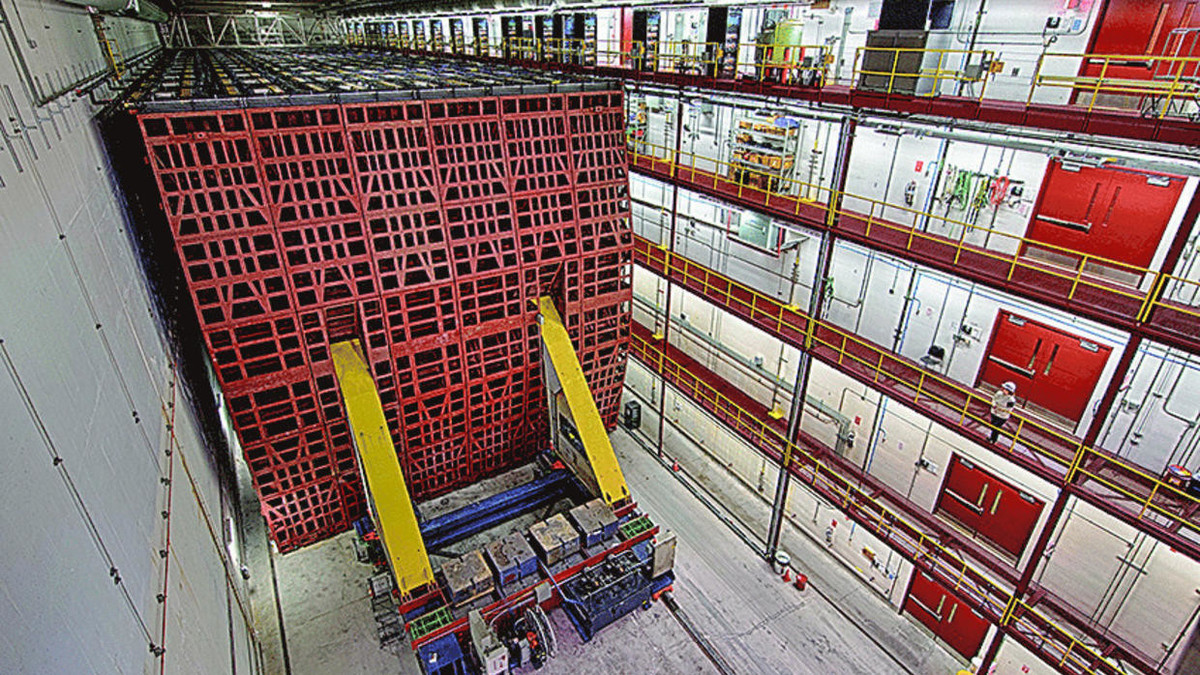 My research focus is the experimental study of sub-nuclear particles known as neutrinos. I work in large, international collaborations and use neutrino beams produced at the Fermi National Accelerator Laboratory near Chicago to measure the parameters of the process called neutrino oscillations, in which neutrinos spontaneously change from one “flavor” or type to another. My current experiment, called NOvA, uses the 811 km NuMI Beam, one of only two existing beams in the world, that extends from Fermilab to northern Minnesota. The beam is instrumented with a 300 ton Near Detector located at Fermilab and a 14,000 ton Far Detector located in the University of Minnesota’s Ash River Laboratory. Although continuing to collect and analyze data, NOvA has already reported initial measurements of oscillation parameters for both neutrinos and anti-neutrinos. My second experiment is called DUNE (Deep Underground Neutrino Experiment). DUNE is a part of a $2 billion international project that will use a new Fermilab neutrino beam and new caverns at the Sanford Laboratory in Lead, South Dakota. The Minnesota Neutrino Group has multiple responsibilities for installation and operation of the DUNE Prototype Detectors at CERN in Geneva, Switzerland, and the actual DUNE Far Detectors that will be installed in South Dakota. These studies will definitely increase knowledge regarding the Weak Interaction. Measurements of symmetry violations in neutrino oscillations may also improve understanding of the Matter-Anti-Matter Asymmetry in the Universe and contribute to development of models of Big Bang cosmology.

My area of expertise is in experimental high energy physics. Most recently, I have been fascinated by the neutrino sector of particle physics. So little is known about neutrinos that the study of these elementary particles may have a profound impact on our fundamental understanding of the physical universe. Currently, I work in the NOvA and DUNE experimental collaborations. These experiments study neutrino oscillation phenomena by making a beam of neutrinos that are shot hundreds of miles through the Earth and detected by building-size detectors. I am heavily involved in the analysis of the data from these detectors.

I conduct research at the CERN Large Hadron Collider, with the ultimate aim of understanding the fundamental nature of matter and the interactions. My group consists of two postdocs, three graduate students and undergraduates at different stages in their education. We conduct analyses of data that we have collected with the CMS experiment at the highest collision energies. Our recent focus has been on a precision measurement of the Higgs boson’s mass in the two photon channel, and a search for anomalous triple gauge couplings. Our graduate students spend time at CERN, where they are involved with the day-to-day operations of the experiment, as well as collaborating with physicists from around the world on their data analyses. In addition, our group is a major player in the upgrade of the CMS detector in preparation for the next generation of the LHC, the High-Luminosity LHC, with many interesting opportunities to learn advanced detector hardware skills.

Below: The Higgs boson mass distribution in the two-photon channel. 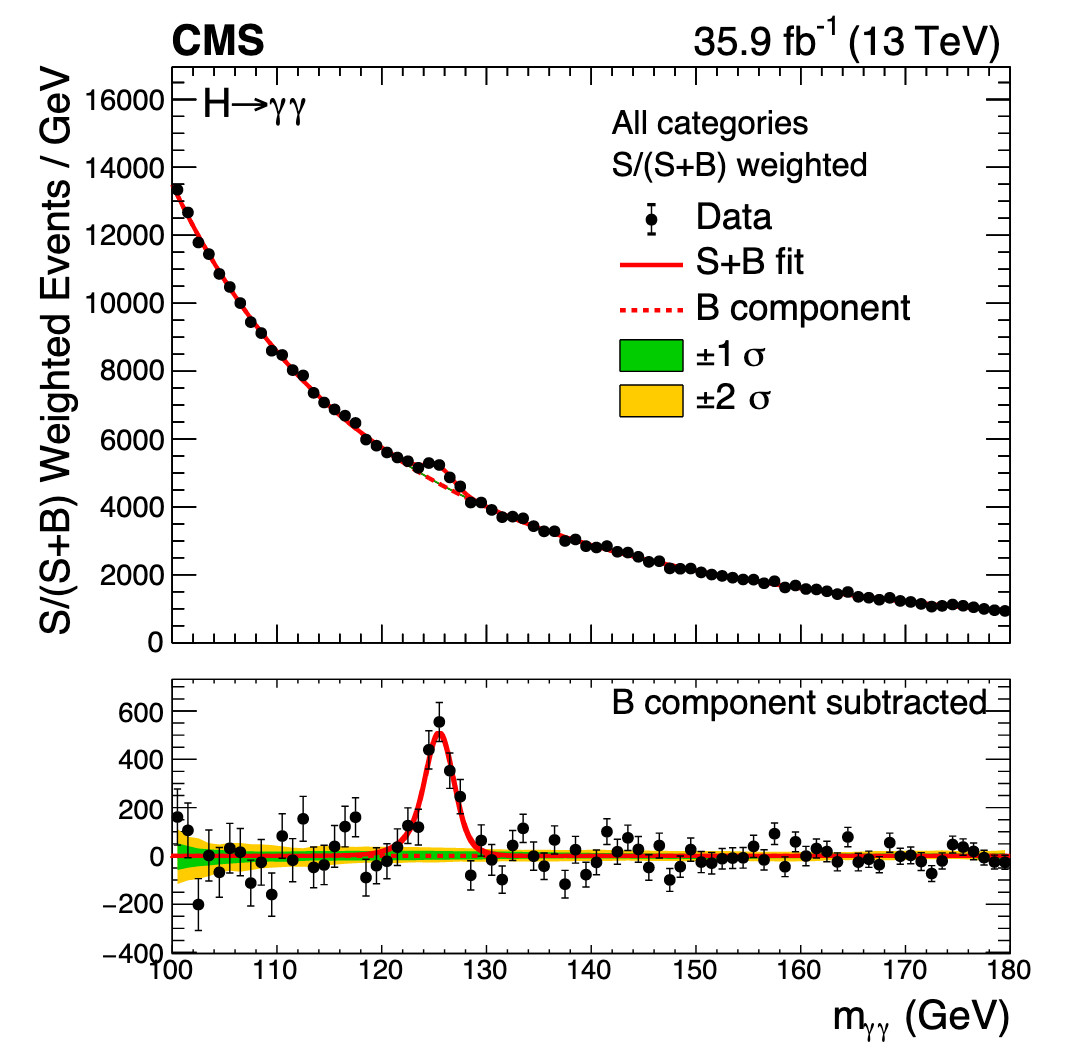 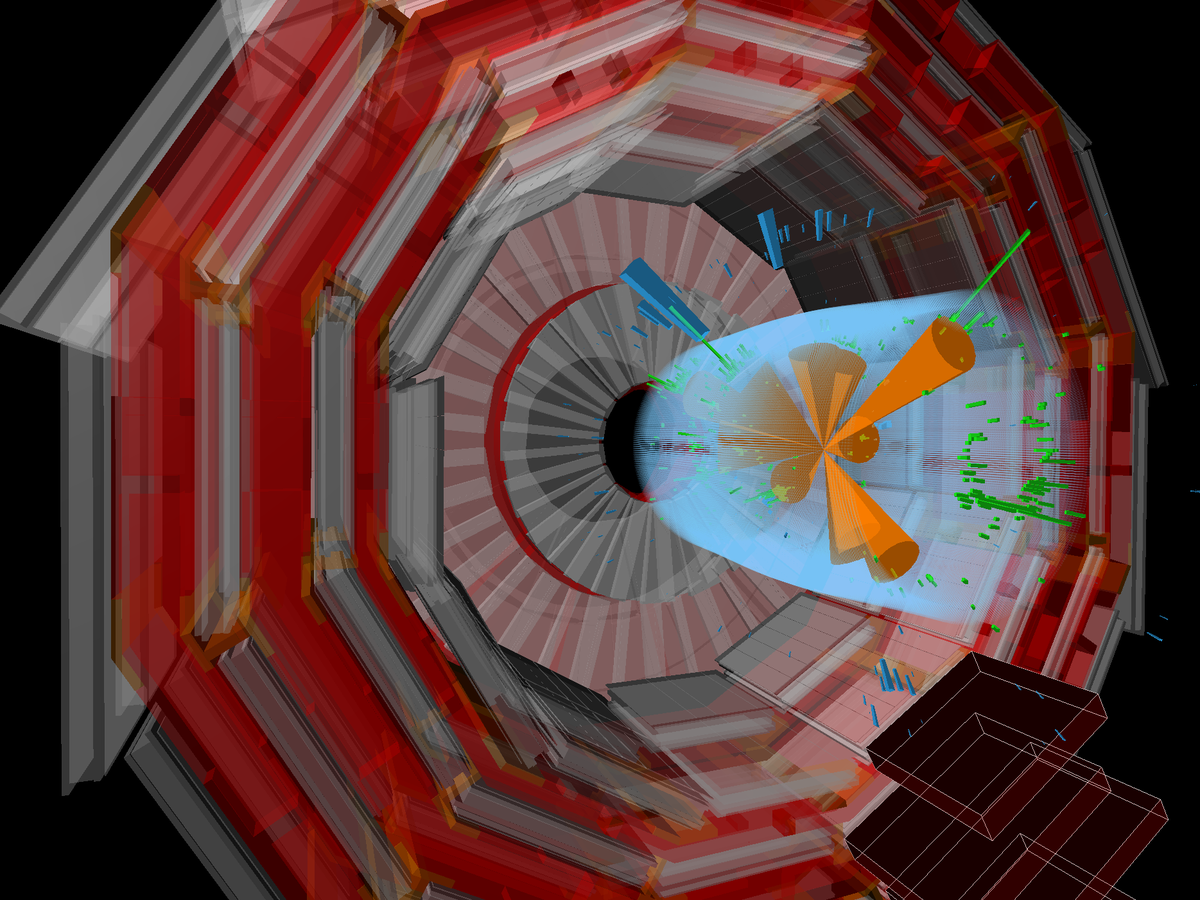 I work on experimental collider experiments, in particular the CMS experiment at the Large Hadron Collider. My research focuses on searching for signs of new physics, beyond what is currently known and encapsulated in the Standard Model. Additionally, I am working on the design and construction of a new calorimeter for the next upgrade of the CMS experiment ahead of the High Luminosity LHC. This calorimeter will be able to take 3D images with excellent timing resolution, and will enable us to reconstruct particle showers with a precision that is unprecedented. Specifically, my group is developing readout electronics that take data from silicon sensors, concentrate it, and send it to the off-detector electronics for further processing.