As the brand officer and vice president of marketing for a global company that employs about 55,000 people worldwide, Jane Lansing’s days are busy and varied. she travels about 75,000 miles a year, connecting with people from all over the world. She finds the most gratifying part of her job to be “developing a vision and a strategy and then implementing it in a big, global organization.” And she is very good at what she does.

Lansing describes Emerson as “very technical, fast paced, compelling, and complicated; a big, global machine in a very high tech industry.” Emerson is a leader in this constantly changing, constantly innovating industry of process and industrial automation. Says Lansing, “To be a leader, you have to keep moving; you cannot get stale.”

Emerson’s purpose is to help plants and processes run safely and efficiently to keep people and communities safe. Says Lansing, “The work is important. Our equipment goes into manufacturing plants that are running 24/7 at tremendous extremes—from extreme cold temperatures on the North Slope of Alaska to steel smelters to chemical plants with highly corrosive chemicals. We have to put equipment in there that can run in those environments. If something goes wrong, the consequences are dire, so quality and safety are extremely important in the manufacturing and in all the work we do.”

As we talked, Lansing identified some lessons that are invaluable in helping to prepare for the future, even though they are not on CEGE students’ required class list.

Be Yourself, Bring Yourself 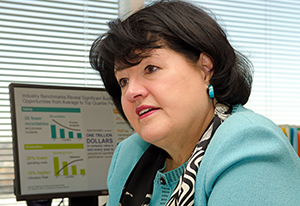 “It is not enough to just do what you are told (by your manager or the boss’s boss). Each person has unique characteristics. You have to learn to bring those out and put them to work for the company. If you do not bring your own unique contributions, the company, everyone, misses out,” says Lansing. “The company needs your ideas.” This only becomes more important as a person takes on leadership roles.

Lansing credits learning to be herself and bring her own unique contributions to the workplace as the lesson that has had the single biggest impact on her career. However, when she had what she calls her epiphany, she had no idea how to start being herself at work rather than just assimilating into the workplace of someone else’s design.

“I started by just paying attention. I began journaling. What energizes me? What do I like? What do I not like? How do I get more of this and less of that? It was about this time when I applied for my first overseas job in Holland.”

In her explorations, Lansing had determined that what was important to her was being a citizen of the world, having a wider purview, doing something bigger. So when the just-right job opened up in Holland, she recognized it as the perfect job for her. Although no one else knew it, yet.

“I sent a note to the hiring manager, whom I did not know, and said “I know I have never lived more than 25 miles from the place where I was born, but I think I am a good fit for this job.” I went over and interviewed and got the job. Later, I found out that when I was selected and my company put me in that job, they considered me a very high risk. I considered myself no risk at all, but they considered me an extremely high risk. No mentor or manager would ever have coached me to take that job. You have to know yourself and be willing to do what it takes to do what you want.”

Lansing’s assignment turned out to be very successful. When her boss left, she managed the operation for a while. Afterwards she had a lot of opportunities and was being encouraged to take the “next step” job, but she wasn’t especially interested in what others had identified as her next step. “I was getting a lot of pressure, so I actually engaged a career counselor.” Lansing advises, “Both men and women get coached to take the next step and follow a traditional career path. If people don’t know you, they will encourage you to do something that is not right for you. You really have to take responsibility for your own career.”

There is No Magic 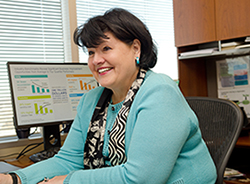 “The most valuable thing I’ve learned is that there is no mystery, no magic, just things I haven’t figured out yet.”

Lansing had originally planned a pretty traditional career. Her original idea was to graduate with a civil engineering degree and go to work for the Army Corps of Engineers. “But things change—I have not followed a traditional path. One of the first changes came when I finally took the required computer programming class.

“I’d had a bad experience in eighth grade and I thought I was bad at computers. I had this aversion because I didn’t understand them. I had put off taking that computer class as long as I could. Finally, I took FORTRAN programming my senior year. One of the final assignments was to write a compiler, a program that interprets another program. I remember carrying this big box of punch cards into the basement of Koltoff Hall. It was in the spring. It was about 2 in the afternoon. I worked and worked, debugging, debugging, debugging. Eventually I thought, it’s probably about 11 at night, I haven’t had dinner, and I have to ride my bike, I better go home. I looked and it was 4 a.m! I had totally lost myself in the task.

“I had overcome my aversion to computers; I’d figured them out. That experience convinced me that there is no magic, only things I haven’t figured out yet. Coming out of school with the attitude that I can figure things out and solve problems has served me very well. I’m willing to take on any plumbing problem or electrical problem, any technical problem, any business problem because I know there is no mystery or magic. I have the technical skills and the knowledge, I just have to understand and I can solve the problem. A really solid technical education gives you the ability to think and solve problems, which opens up pathways to whatever you want to do.”

Time in the Trenches 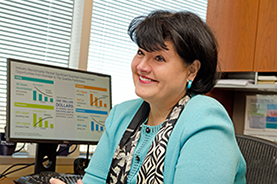 Having a solid capacity to solve problems is a great tool for following your passion and doing what you want to do. But it is not enough.

“There is another step that is important in preparing students for their futures. That is being in the trenches and doing the work. Some people get ahead of themselves, so busy planning their career five years out that they forget to pay attention to what they are doing right now. Be in the present; enjoy what you are doing now and do it well.

“Everybody wants to get out and get a big job and make a ton of money, but the only way to get there is by doing what you do well and loving what you do. You are not going to be able to lead people and have impact—and you get money when you have impact—if you do not know where you are going. That feeds into the passion part. You also have to put in your time and do the work.

“The student years are part of being in the trenches; that is where you learn the basics and learn to think and solve problems. Then you have to keep working when you get on the job and do everything you do really well. 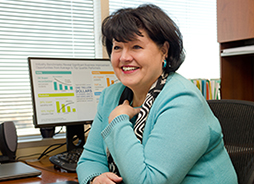 “These lessons have prepared me well, and I think they will help students be successful, too. Ground yourself with good fundamentals. Put in the time learning to understand and solve problems. Apply your analysis and problem solving skills to your career. Then you are free to engineer your own path. And you will probably make lots of money, too!”