Note: additional historical information may be available. If you have a question, please send an email to harva015@umn.edu.

As a central science, chemistry has been an integral part of the University of Minnesota since its official establishment in 1869.

Edward Twinning was the first University faculty member to teach chemistry. During the early years, chemistry was part of the agricultural division and was housed in the Agriculture Building. That building was constructed in 1875, and was destroyed by fire on December 3, 1888. A new science building, now called Nicholson Hall, was built and occupied by chemistry and physics in 1890.

Edward E. Nicholson served the University for 46 years, 1895-1941, as a member of the chemistry faculty and later Dean of Students. He is one of four chemists honored by the University with his name on a building. The others include:

The chemistry curriculum began to expand significantly, and the number of students and faculty increased. Medical students took courses in physiological chemistry, toxicology, and analytical chemistry. Chemistry was taught in two colleges—College of Science, Literature and the Arts and College of Engineering, Metallurgy and the Mechanical Arts. As more colleges developed within the University, faculty at those colleges taught all courses to their students. The Medical School and College of Agriculture both constructed their own chemistry buildings in the early 1890s. The increase in the number of students taking chemistry courses eventually required the separation of physics from chemistry in 1902. Physics moved to a new building and Nicholson Hall was renovated to accommodate additional chemistry labs.

In 1893, George B. Frankforter was hired to head chemistry. Upon his arrival in Minnesota, he immediately started the long process of building a first-rate program by

Frankforter’s vision was to bring all chemistry at the University into one School of Chemistry. The culmination of his efforts came on May 17, 1904, when the Board of Regents officially separated the School of Chemistry from the College of Science, Literature and the Arts and appointed Frankforter as its dean. 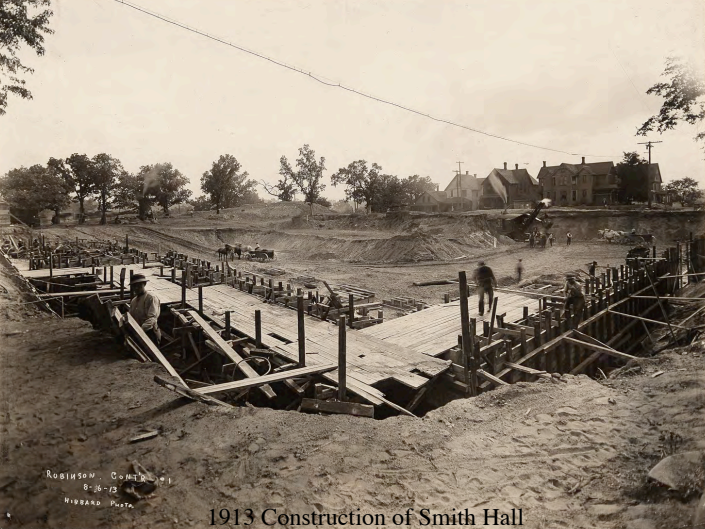 Plans were drawn and an appropriation was approved for a new building. Construction took two years and consumed more money than was allocated. In 1913, Smith Hall opened without a completed west section and missing the planned fourth floor. It was one of the first university buildings in the United States devoted exclusively to chemistry. It remains an iconic building on the Northrop Mall, and still has School of Chemistry etched into its concrete facing. Eventually, funds were allocated to complete the building, and an addition was completed in 1922.

Even before it was completed, the space problem caused Dean Frankforter to write, “Some of the students in the main laboratory have no regular laboratory locker desks and have been compelled to use small boxes for their apparatus, chemicals and problems.” Smith Hall suffered significant damage in 1959 in a fire that started in the basement. No students were injured in the fire, but the building needed a lot of work. Smith Hall was completely renovated in 1972. Another renovation, which finished in 1987, added air conditioning to the building.

Currently (2020), the University of Minnesota is seeking $65.6 million in state capital bonding funds from the Minnesota Legislature for a new chemistry undergraduate teaching laboratory facility. The state bonding funds will be used to transform Fraser Hall into an academic hub for undergraduate chemistry. The total cost of the project is $98.4 million with the rest of the funding, $32.8 million, coming from the University of Minnesota. With an addition and renovation to existing space, Fraser Hall would encompass 18 chemistry teaching laboratories, collaboration space, lab prep and support space, tutoring space, nine offices, and updates to two existing large, general-purpose lecture halls. The façade of the historic Fraser Hall would be preserved.

From 1917 to 1925, a number of reorganizations took place, including the establishment of five formal and largely independent divisions—analytical, general and inorganic, organic, physical, and technological chemistry.

In the period from 1919 to 1935, the University also moved to establish the Institute of Technology. Most of the students graduating from the technological division received chemical engineering degrees. In 1949, the faculty in the technological chemistry composed a new Department of Chemical Engineering headed by Professor Charles Mann.

Professor Samuel C. Lind, who had been serving as the director in chemistry since 1926, was appointed as the first dean of the Institute of Technology in 1935. Lind was an important figure in chemistry, especially in his field of ion-molecule reactions and radiochemistry. He did post-doctoral work with Marie Curie in Paris and at the Radium Institute in Vienna, and published extensively on the interaction of radiation with gas molecules. During his stay at Minnesota, 1926-1945, he was elected president of the American Electrochemical Society, president of the American Chemical Society, and a member of the National Academy of Sciences. In 1952, after his retirement, he became the first faculty member to receive the Priestley Medal—the most prestigious award granted by the American Chemical Society.Lind attracted many outstanding faculty members to Minnesota who built the department’s strong foundation of research. Some of those included:

In 1920, a fresh doctorate from Harvard, Lee Irvin Smith, 1891-1973, joined the faculty and served as chief of the Division of Organic Chemistry from 1932-1958. He specialized in synthetic organic chemistry, and is best known for his extensive work on polymethylbenzenes, which led to the synthesis of vitamin E. He was elected to the National Academy of Sciences in 1944, and was the first recipient, in 1958, of the Minnesota Award given by the Minnesota Section of the American Chemical Society. He retired in 1960, and died in 1973. His research and leadership propelled him to the forefront of organic chemistry and he was recognized as one of the scientists that helped to move the center of organic chemistry to the United States.

Another forefront scientist, Izaak Maurits Kolthoff, 1894-1993, joined the department in 1927. Kolthoff was considered the father of modern analytical chemistry, and was head of the analytical division from 1930-1962. By applying fundamental physical principles and insights, he transformed chemical analysis from a qualitative to a quantitative science. He is best know for developing a cold process recipe for synthetic rubber during World War II. He “retired” in 1962, but continued his research and writing until his death. More than 1,100 doctorate chemists can trace their academic lineage to this laboratory. He was elected to the National Academy of Sciences, was the first recipient of the ACS’s first Award for Excellence in Education, and was posthumously induced into the Minnesota Science and Technology Hall of Fame.

The University honored both Smith and Kolthoff by naming its chemistry buildings after them in 1972, in conjunction with the dedication of the newly built Kolthoff Hall. The Department of Chemistry also honors Kolthoff’s legacy with its Kolthoff Lectureship in Chemistry, which brings some of the most preeminent scientists in the world to the University for multi-day seminars and workshops.

The number of students taking chemistry courses resulted in the construction of what is now known as Kolthoff Hall. Construction started in 1968 and was completed in May 1971. A two-year renovation of the building begin in 2006, and included expanded hood-intensive laboratory space, upgraded teaching laboratories, and separating graduate student offices from the laboratories.

Throughout the years, the Department of Chemistry has been fortunate to attract some of the finest scientists in the world to its faculty. Two faculty members earned the Nobel Prize in Chemistry—William Lipscomb, 1976, for his studies on the structure of boranes illuminating problems of chemical bonding, and Paul Boyer, 1997 for elucidation of the enzymatic mechanism underlying the synthesis of adenosine triphosphate.

Some of our other early pioneers include:

We have legends on our current faculty as well who are at the forefront of their fields. They are building their own legacies as outstanding researchers and teachers.