On March 25, 2021 our dear friend Professor Emeritus Larry Miller passed away at the age of 81. Larry received his PhD in 1965 in the field of physical organic chemistry working with David Curtin on 1,3 – acyl migrations at the University of Illinois – Urbana Champaign. After graduate school Larry took a position in the Central Research Division of American Cyanamide in Stamford, CT where he started his career-long contributions to the field of organic electrochemistry. After a few years, Larry’s interest in teaching prompted his move to Colorado State University as an Assistant Professor, where he rose quickly to full Professor.  In 1977 he moved to the University of Minnesota in Minneapolis.  In research, Larry used electrochemistry as a vehicle to study the properties and reactions of oxidized and reduced organic compounds. He made extensive contributions to the field of polymer-coated electrodes and to applications including the controlled release of drugs from electrodes, plasma chemistry of organic compounds, sensors and organic electronics. He and his research group comprising over 40 graduate students, many post-doctoral associates and undergraduates published more than 200 research papers in the fields of organic chemistry and electrochemistry. His research program was unusual in its originality and breadth.  He was most proud of coming up with new ideas and demonstrating their validity, and he won several national and international awards, notably a John Simon Guggenheim Fellowship. In teaching he was an exceptional undergraduate lecturer in organic chemistry earning praises from students. His innovative and widely acclaimed freshman seminar “The Color Red” was popular and always oversubscribed. For his outstanding contributions to teaching he received the highest all-university teaching award, the Horace T. Morse award.  Professor Miller served as Chemistry Department Chairman and was named an Institute of Technology Distinguished Professor. 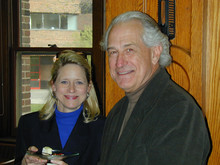 Larry and Bobbie Miller met at the University of Minnesota and were married in 2002. Following retirement that year they moved to Fallbrook, California where he sculpted, played tennis and volunteered for several organizations, especially the Fallbrook Public Library.  He initiated art exhibits there that featured more than 800 artists over the years. In addition to Bobbie, Larry is survived by his sons, Douglass and John, his sister Marilyn, by his stepchildren from a former marriage, Tomer Kariv and Irit Kolber; Bobbie’s children, Jake, Alex and Nicholas Rush and altogether 13 grandchildren and 8 great-grandchildren.  He kept close to his sister and her family as well as his grandchildren. They were both a source of joy and pride to him.

His family requests memorials in Larry’s name be directed toward research on Alpha-1 Antitrypsin Deficiency Disorder to the Alpha-1 Foundation: https://www.alpha1.org

A published obituary in the Minneapolis StarTribune can be found at this link.