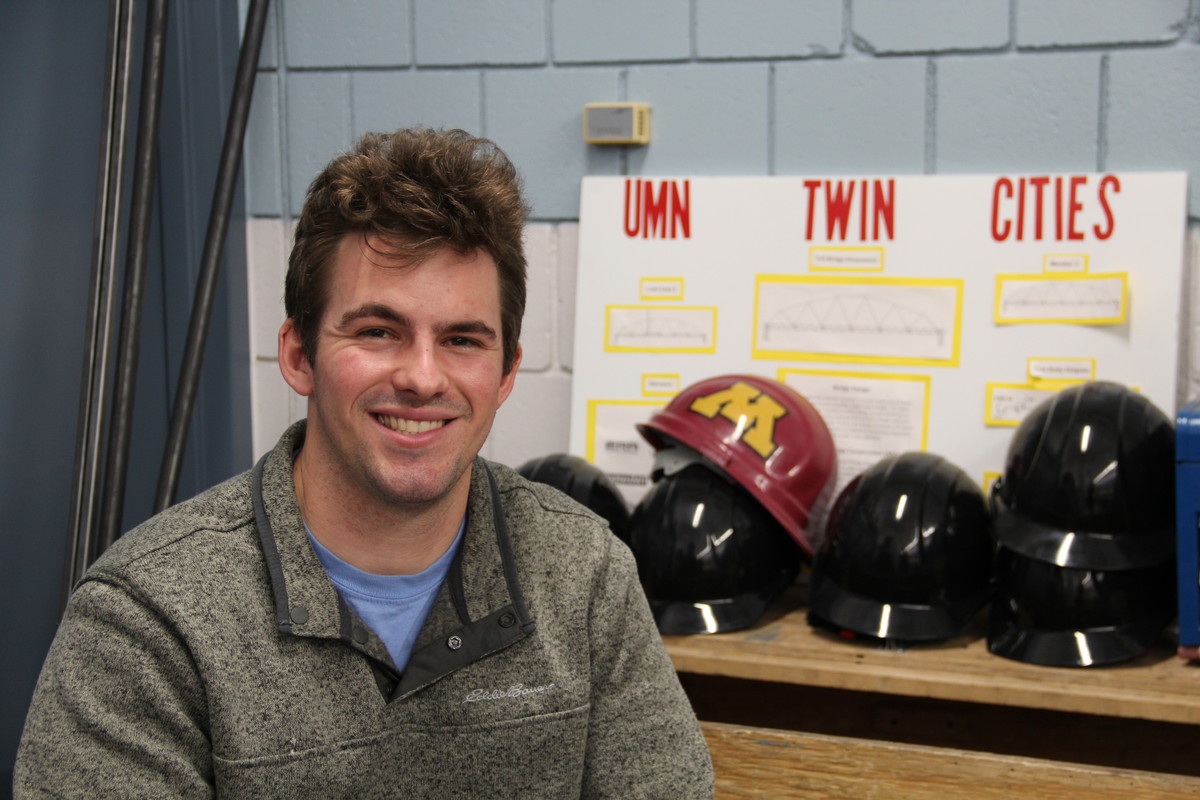 Justin Babcock, a CIVIL ENGINEERING MAJOR WITH A CONSTRUCTION MANAGEMENT MINOR, will be graduating in May 2022. Justin Babcock likes to be involved in a lot of activities. He knew he needed more than just classroom experiences to make the most of his college experience. So his first year on campus, he did what few first year students do, he got involved with American Society of Civil Engineers (ASCE) and the Steel Bridge Team.

“Being involved with ASCE has been one of my favorite things in CEGE.”

“It took a little bit of courage to go to the meetings freshman year when there weren’t a lot of other freshmen involved,” he admits. What he found there was an automatic group of friends. “Joining ASCE gave me the opportunity to chat with people I didn’t have in classes. Right away I made friends with juniors and seniors, rather than just everyone in my own grade.”

By his sophomore year, he had stepped up to an officer position, and he has been part of the leadership team ever since. Steel Bridge is interconnected with ASCE. Being involved in the two groups helped Babcock establish an extended group of friends in CEGE.

Babcock went to the competition his first year. “It was so much fun and gave me a desire to take classes. I did not end up with a structural focus, but Steel Bridge definitely inspired me to understand more about structures.”

"Steel Bridge definitely inspired me to understand more about structures.”

The following year, spring semester rolled around and it seemed that there might not be a steel bridge team due to the past captains moving on to the professional world. His predecessors had completed the designs, which was one area where Babcock lacked experience, but he did have fabrication experience. Babcock did not want to lose a whole bridge season, so he committed to
being the captain of the Steel Bridge Team. It was hard to get students involved during COVID,
and Babcock and his co-captain ended up doing the majority of the work. “We built the bridge in the seventh-floor lounge area. It was definitely a full-time job between February and our competition in the spring.”

This year, Babcock is again the captain. But this time he has more help—co-captain Hunter Mann, design lead Alec Lorenz, build lead Noah Struck—and time to space out the process. Which allowed  Babcock to also participate in design and in the procurement of materials.

“Construction was my first love and the way I got into civil engineering.”

Babcock credits his interest in construction to exposure through his dad, who worked on the surety bond-side of the industry. From there, he developed an interest in design, which led him into civil engineering. “I found I like both application and design.”

Construction management required classes in estimating, safety, and documentation. Here, too, Babcock found his extended CEGE family. “I was on the board of the Construction and Facilities Management Student Association (CFMSA). Brandi Rutten, who is also in the BCE program, is the Vice President.”

As the Vice President of the UMN ASCE Student Chapter, it was Babcock’s job to coordinate the ASCE Career Fair. That experience gave him a “leg up” as he was able to talk to many companies and recruiters. “A lot of the recruiters already knew me. Construction management friends and past steel bridge participants were asking if I was looking for a job. It was awesome to have connections made through those clubs. Interviewing was super hectic. I had a bunch of interviews.” After graduation, Babcock will join WSB Engineering in June as a graduate municipal engineer.

Babcock’s internships helped him focus his career goals. Last summer, during an internship with Alliant, he stepped into a project designing the bike lanes through 4th and University. The engineers working on the project talked about the work that happened in addition to design—city council meetings, talking to people in the community, marketing the plan to students, faculty, and the UMN Board of Regents. “I want to have a construction impact, a city impact, and talk with people affected by the projects, and bring the technical world to regular people. So municipal engineering, maybe one day a city engineer, that’s what I hope I’ll be doing.”

“I want to have a construction impact, a city impact, and talk with people affected by the projects, and bring the technical world to regular people."

"I’ve been telling everyone who will listen that the most growth I’ve had as a person and professionally has been through my involvement in student organizations.”

“A lot of students just do classwork and go home. The classes are definitely very valuable. But through my extra-curricular activities I’ve learned event planning, design, project management, leadership, and it’s the main way I have made friends. People who do home-work and go home don’t get that extra experience. I’ve been telling everyone who will listen that the most growth I’ve had as a person and professionally has been through my involvement in student organizations.”