The Stone Arch Bridge across the Mississippi River is a popular spot for running, cycling, or just viewing St. Anthony Falls. Nancy Daubenberger (MSCE '97) appreciates the old bridge for those reasons, but also as a beautiful example of arched concrete and masonry construction.

Since February 2011, Nancy Daubenberger has served as State Bridge Engineer in MnDOT’s Bridge Office, so she knows her bridges. “Stone arch bridges are stout, strong, and elegant-looking structures but, typically, not as cost-effective as modern alternatives.”

As the Minnesota State Bridge Engineer, Daubenberger is responsible for building, monitoring, and maintaining all the bridges in Minnesota—more than 20,000. “We have a very large bridge program right now with bridges in all phases. In my job I get involved in discussions and decisions on all stages for new bridges, as well as on inspection and maintenance of bridges that are in service. I also get involved with the legislature and respond to any bills pertaining to bridges. I have a good team of technical people who are very good at supporting me. My role is to remove hurdles and do what I can to get the resources they need so we can deliver and manage the program.”

“I think bridges are a lot of fun! I emphasized in structures within Civil Engineering because of the challenges they present. Transportation has an impact on so many people; I felt I could make a big impact working in that field.”

Talk about impact! A conversation with Nancy Daubenberger about some of Minnesota’s bridges reveals the span of her knowledge and influence—and how her education from UMN’s Department of Civil Engineering created a good foundation on which to build her career.

Daubenberger took over as State Bridge Engineer a few years after the collapse and rebuilding of the I-35W Bridge. However, that event instigated a program to inspect and repair or replace Minnesota’s structurally deficient and fracture critical bridges, which still drives MnDOT’s efforts.

“It was a little daunting taking on this role on the heels of the I-35W Bridge collapse, especially when I saw what was required of my predecessors following the collapse. However, I knew we had good, technical people in the Bridge Office who would help me out (and they always do!). Because of that, I knew I could step up. So I applied and was pleased to get the job. It is interesting and challenging—day to day there are challenges! I work with good people at MnDOT, in the local and federal agencies, at the University, and with the public, too. It has been an enjoyable job.”

A duty lingering from the collapse was that Daubenberger needed to distribute the physical remnants of the collapsed bridge. Families of victims and directly impacted survivors were given first chance at the pieces of the twisted metal that served as a remembrance of the catastrophe. MnDOT also offered some steel remnants from the I-35W Bridge to the University. “I was touched to learn the Department of Civil Engineering had used a piece of the steel to create an oversized Order of the Engineer ring for use in the graduation ceremony.” 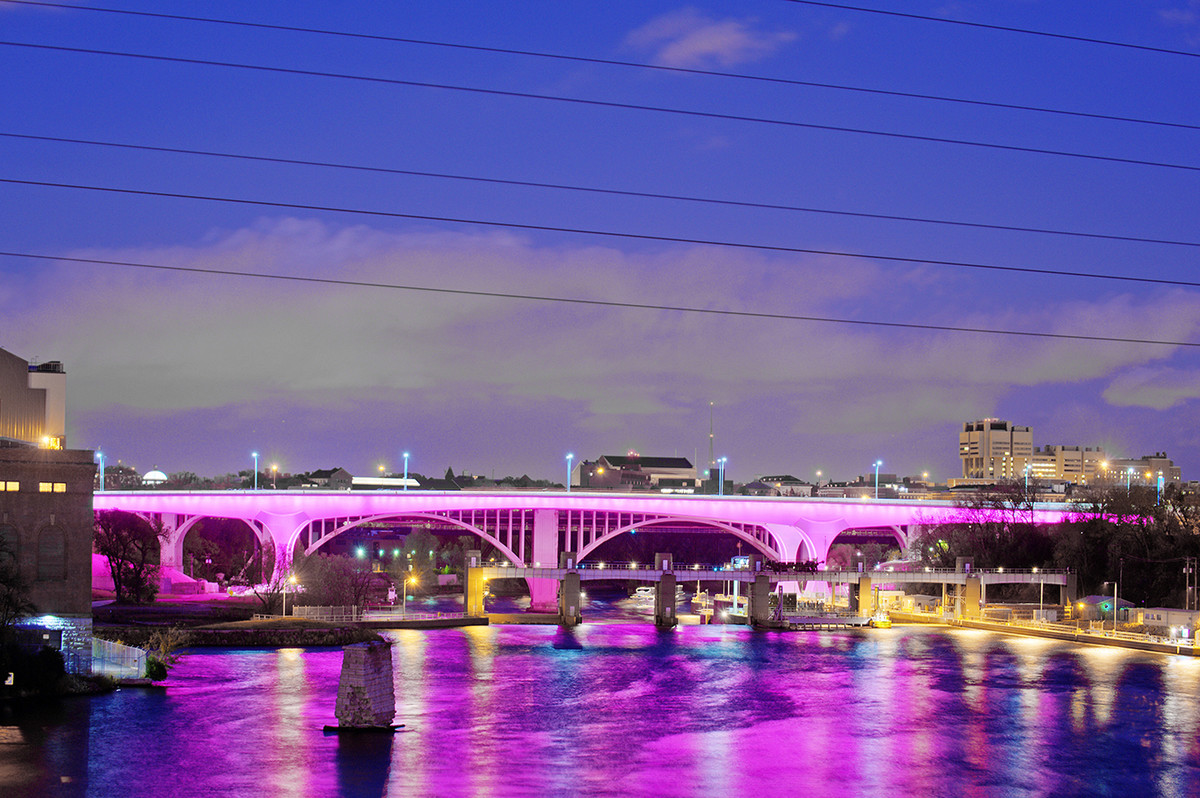 Graduating students put their hand through the oversized ring as they take the Oath of the Engineer and pledge to use their knowledge ethically and responsibly. “That was a great, forward looking use of the steel remains.”

Of course, not all of the bridge restoration projects are that dramatic. The Lafayette Bridge, which crosses the Mississippi River at St. Paul, was determined to be in need of replacement. The reconstruction project began in 2011 and will continue into 2015. Throughout the entire project, the bridge will remain open to traffic. The challenging logistics may not be immediately apparent, but consider that this bridge is the longest in St. Paul (3,366 feet), carries about 90,000 cars per day, and navigates around a large river, railroads, several loading docks, and a barge terminal. Such complicated configurations are not uncommon in Minneapolis-St. Paul, where traffic can become congested even without construction.

The St. Croix River Crossing project highlights another kind of complication: the collision of modern traffic demands with history and nostalgia. The picturesque lift bridge near Stillwater holds memories for many Minnesotans, and proposed changes encountered some emotionally-charged resistance. But the amount of traffic and limited river crossings necessitated a change. Public debate went on for years before the current plan was approved.

Daubenberger says, “At MnDOT, we hold and participate in a lot of public meetings. I talk with the media, too. More and more in my career, I have the opportunity to speak to the public. I enjoy doing that; it is good to meet the public and hear and respond to their questions. I enjoy being the face of the Bridge Office.”

“Most classes in the Civil Engineering Master’s program required me to get up and speak—a highly valuable experience. I would advise students to take as many speaking opportunities as possible, even if they are afraid. Explaining technical things to non-technical audiences is a big challenge to us engineers, who are trained very technically. The more practice we get, the more effective we can be in communicating to the public. It can be a challenge to keep up with—much less explain—new technologies related to bridge building and maintenance. The Hastings Bridge, which opened last year, employed some newer techniques.

"Nancy Daubenberger recognizes the importance of monitoring fracture-critical bridges. She has been a strong supporter of this research and carefully follows our developments as she considers potential implementation in Minnesota. She recognizes the importance of collaboration between MnDOT and UMN because they synergy that is created by positive interaction between bridge engineers and engineering researchers leads to developments that transcend capabilities of either group."

MnDOT used a design-build delivery method for that project. The contractor proposed a method of building the bridge offsite while the foundations, piers, and abutments were being built at the location of the new bridge. When the foundation, substructures and arch were complete, the arch was moved onto barges, using self-propelled modular transporters, floated down the river to the new location, skidded into position and lifted onto the piers.

Daubenberger watched the float-in operation from the deck of the old bridge. “I watched the new bridge being put into place. It was pretty exciting and a little nerve wracking. I was very relieved when it was done and everything was OK.”

MnDOT tapped into Professor Emeritus Ted Galambos as a steel expert on the Hastings Bridge project. “I took quite a few classes with him at the University; he was one of my favorite teachers. He is a pioneer in the steel industry.”

Keeping up with research is imperative, and is made somewhat easier by MnDOT’s ties with the University. “New solutions are needed to be viable, adaptable, and sustainable,” says Daubenberger. Currently MnDOT and the University are partnering on research in the use of bridge monitoring technology. Monitors are being used on the new I-35W Bridge, which Catherine French (who was Daubenberger’s graduate school advisor) and Carol Shield study. Monitors are also in place on the Cedar Avenue Bridge, which Arturo Schultz is studying.

But a bridge engineer needs to look back as well as forward. Some historic bridges are preserved even though they cannot meet today’s traffic demands.

“We have quite a few historic bridges in Minnesota,” notes Daubenberger. “MnDOT committed to the preservation of a couple dozen historic bridges. We are proactive about preserving those bridges, knowing we will have them long-term. Historic bridge maintenance projects can be complicated. The State Historic Preservation Office needs to concur that repairs meet standards set by the Secretary of the Interior and that the historic character is being preserved. These bridges represent our engineering heritage; it is important to preserve them.”

“When I look forward to challenges that will be facing engineers in the near future, two big things come to mind. One is the aging of our infrastructure and finding resources to preserve or rebuild in innovative and sustainable ways. A second big challenge is the loss of institutional knowledge as many MnDOT engineers retire. Data management is more sophisticated now than when the baby boomers came into the field.

A lot of knowledge and experience is stored in their minds. It will be a big challenge to rebuild that knowledge base.” Both of those challenges require recruiting talented staff. Daubenberger looks for people “who are ambitious, like to try new ways of doing things, and ask questions about existing processes.”

Women will play an important role in meeting the staffing challenge. Daubenberger offers this advice to women: “Do not be afraid to take on leadership roles. Build a good support system among your co-workers as well as at home, and don’t underestimate your ability to serve in leadership roles.”

Daubenberger is a good embodiment of her own advice. She surrounds herself with good people, who she speaks of often and positively. And collaborators speak highly of her, too.

Daudenberger is the first woman to hold the office of State Bridge Engineer. Although Daubenberger's road may have been "unpaved" in that sense, she seems to be plotting a straight course.

DAUDENBERGER'S CONNECTIONS TO UMN STRETCH TOWARD THE FUTURE

Daubenberger is friendly, welcoming, and generous with her time. She seldom fails to seize opportunities for greater interaction with the faculty and students at UMN. In December 2013 Daubenberger was asked to speak at the Department’s commencement ceremony. “It was a great experience. I knew some of the students who graduated that day. One had been a student worker at MnDOT and now has a job with a consulting firm. It was good to see her graduate.”

Daubenberger’s daughter has shown interest in becoming a civil engineer. “Neither my husband (also an engineer) nor I pushed her that way. What really piqued her interest were her high school STEM classes, especially her class in civil engineering. My daughter laid out the municipal development of a site and used software to design buildings. She especially enjoys the design part of it. Maybe she will be a bridge designer someday! It was interesting for us to see her find that on her own, although I’m sure that we influenced her unintentionally. For instance, over spring break we traveled to see the Hoover Dam. As far as our kids know, that’s what all families do on vacation—look at dams and bridges and other civil engineering structures!”

“I would be very happy if my daughter attended UMN. Not only because it is local (always a plus for a mother!), but because it is a good school. I definitely recommend the U of M engineering program to students—both undergraduate and graduate.”