While many alumni, family, and fans gathered in the Civil Engineering Building on Homecoming Day, one CEGE student was on the field with the Gophers. Junior Jared Hartman is a long snapper.

Long snapping has many nuances, but the main point is to be consistently fast and on target. The position, says Hartman, often goes unnoticed unless something goes wrong, but that doesn’t seem to happen for Hartman. In the 2014 season, Hartman hit his target on all of his 62 snap punt attempts. He’s also been to three bowl games.

“I grew up going to all the Gopher games. My dad was a strength and conditioning coach for the hockey team and was on the football staff with Coach Glen Mason. Playing football here feels like I have come full circle. To actually play as a Gopher is pretty special.”

Hartman suffered some injuries in high school and almost gave up on football. Anyone familiar with the concept of repeated loading can appreciate Hartman’s analysis. But in the spirit of engineering—and fortunately for the Gophers—Hartman kept searching for a solution. Long snapping allowed him to keep playing football and limit his exposure to further stress. He will play one more season before he graduates.

Hartman is currently the only civil engineering major on the team, but when he started, Patrick Sveum and Chris Bunders were playing (both completed their CivE degrees in 2011). “If they can do it, I can do it,” he told himself. Hartman finds that his experiences on the field and his studies in engineering complement one another. 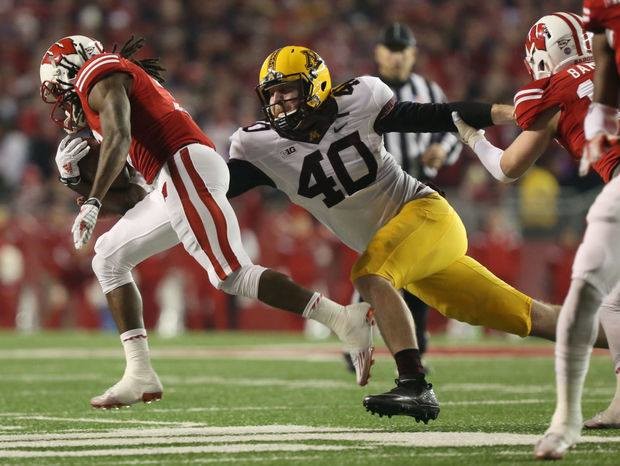 “At the end of the day, football is just a game, but it is a tough game. In football we are taught to approach life one day at a time, to be in the moment. If you get too far ahead of yourself, you are going to forget about what you are trying to do now. For me, that applies to classes, too.

“I’ve had a couple internships and learned a lot in those experiences. In the summer of 2013, I worked with the MnDOT Office of Materials in the Geotechnical Engineering, Foundations Unit. We worked on a bridge in Rock County, and went to Jay Cooke State Park where a road had a couple slope failures. Having that experience really helped me connect the dots when I took the Soil Mechanics class.

“In 2014 I worked with the City of St. Paul Public Works. I was outside every day, inspecting old sidewalks and curbs. If a citizen called with a problem, I pulled the permit for that property and looked at where the waterlines and the piping were located. Then I would go to the site and try to figure out what was going on. I would talk to property owners or other people affected about how we might address the problem. I also did some AutoCAD drawings to track where everything was for new permits. That internship let me see the maintenance side of civil engineering. Once you put something up, you have to make sure it still works.