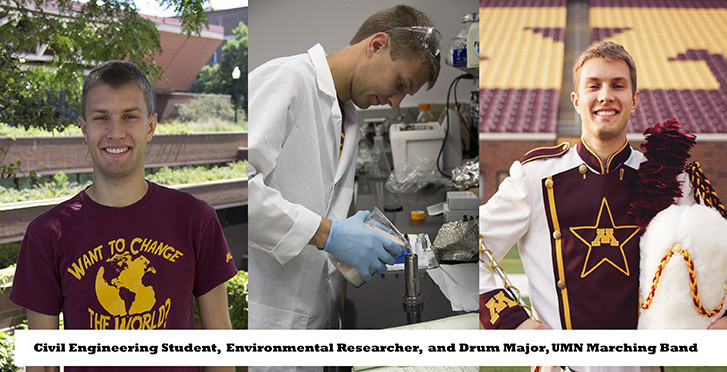 Robert Rudin is the first in his family to become an engineer. His father and grandfather, in addition to passing along their name, passed on an affinity for science and numbers. He got another strong dose of technological ability from his mother, a computer systems analyst. It seems young Robert was predestined for the sciences.

His science interests were further stimulated when he encountered a passionate chemistry teacher in junior high. Mr. Ellingson had traded his successful industrial career at 3M for the privilege of inspiring young minds through chemistry. Ellingson was “very into” chemistry, prompting Rudin to declare that he “never felt forced to learn anything.” He’d caught Ellingson’s passion.

Rudin is a hands-on person who seeks out practical applications for his knowledge. When he came to the University of Minnesota, Rudin found his ideal mix of science and application in civil engineering, where the CEGE curriculum encourages students to experience multiple areas of civil engineering. He decided to emphasize environmental engineering and minor in chemistry. Rudin’s decision to focus on environmental engineering was influenced by his desire to preserve the environment while still being able to enjoy it. He is on track to graduate in the spring of 2017, four years after enrolling.

Last summer, Rudin participated in an undergraduate research program with the National Transportation Center at the University of Maryland. He worked on developing a model looking at various socioeconomic factors (jobs, location) and how they might influence a person’s automobile possession and use (number of cars, model, mileage, etc.). One application of this model could be to estimate air pollution for an area based on those factors. He used “R” programming software (which he also used in transportation classes at UMN) to comb through large data sets and identify factors important for the new model. A second project involved writing a business case evaluating the feasibility of the state subsidizing a short-line railroad and comparing that to other options such as trucking. Rudin’s interests include history and politics, so he loved the opportunity to spend time close to DC. It led him to think about one day bringing his engineering expertise to consult on public issues or projects.

This summer, Rudin worked in an environmental research laboratory at UMN under the guidance of Professor Bill Arnold and doctoral candidate Jill Kerrigan. “It has been a great opportunity to experience a working lab. I participate in the weekly update meetings and hear about all the research going on in Professor Arnold’s group.”

Kerrigan’s research involves examining soil cores from lake sediment and determining trends in antibiotic concentration over time. Rudin helps concentrate and analyze the sediment. “The project is more complex than I expected. I was surprised about all the steps involved in preparing the samples for analysis—concentrating the sample and ensuring that it does not get contaminated; many simple things can cloud the data. It has also been really cool to go into the UMN Cancer Research Center and to see the liquid chromatography tandem mass spectrometer. As a student researcher, I am very lucky to have access to such impressive equipment.”

Rudin is not an “all work” kind of guy, however. He keeps up with his family (twin brothers: one studies architecture at UMN, and the other studies computer science at UMD), friends, and his girlfriend Megan. And Rudin is the drum major for the University of Minnesota Marching Band. Getting all this done requires balance.

“It’s like a teeter-totter: the goal is to keep everything balanced, but not necessarily static. Priorities are constantly shifting up and down, always in motion, but overall, balance is maintained.” 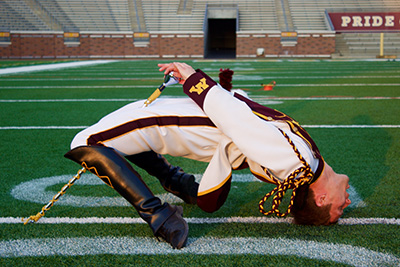 His friend, a former drum major, inspired him to try out for the drum major role. The position is competitive and entails more than most people expect. The drum major leads the band through example, teaches marching fundamentals (developing lesson plans and guiding practice on the field), promotes the band, conducts the band during games and parades, and works with other band leaders to coordinate events.

The audition process is quite rigorous, lasting two-and-a-half months. It includes interviews, training, and performances. It was a stretch for Rudin to put himself out that way. It is one thing to be one player in a very large band and quite another to be out in front as a solo performer. Rudin did not make the cut the first time he auditioned, but gained a lot of confidence through the audition process. The confidence he gained helped him pursue other goals and made him much bolder about trying new things. He was successful in his junior and senior years.

“I put in a lot of time, but so do all the band members. We all contribute different pieces. I rarely do anything alone.”

Rudin has kept his grades up and earned some merit-based scholarships, including the 3M/Coleman Family Foundation Scholarship, which was created by alumnus and football fan H. Richard (Dick) Coleman (BCE, 1973). As the drum major, Rudin is usually pretty busy during Gopher football games, but last season he was able to meet and thank Coleman on the field before a game. (The 3M/Coleman Family Foundation Scholarship has now supported more than 50 civil engineering students.)

Being the drum major precludes Rudin’s involvement in some of the extra-curricular engineering activities. Yet he has good relationships with his classmates and often works with them on the more difficult assignments.

He also appreciates his relationships with his professors. “I’ve discovered that all the CEGE professors want to teach you what they know. I’ve had some really good professors who have taken time to work with me when I struggle with the material.

“For example, I was not particularly interested in structures, and that class was a struggle for me. Professor Lauren Linderman answered my many questions and helped me learn the material. I have to say I am more interested, now—I appreciate all that goes into creating a structure, even a small apartment building.”

“I had an environmental remediation technology course with Professor Ray Hozalski. He is very personable and passionate about what he studies. I ran into him on the bus; he knew my name. It was easy to talk to him and to explore my interests through his. That is true of plenty of other professors, too.”

“Fall semester I am taking a Grand Challenges course, Global Venture Design: What impact will you make? [The course considers how small teams of motivated individuals can move from understanding a global problem—renewable energy, public health threats—to creating impact through business start-ups.] I am looking forward to exploring my future career focus. I am thinking about an environmental position where I can use my chemistry experience, and I’m most interested in exploring environmental and biomedical fields. At this point I am also open to graduate school and diving more deeply into environmental engineering research.”

Interesting factoid: About 30% of the marching band members are from the College of Science and Engineering. 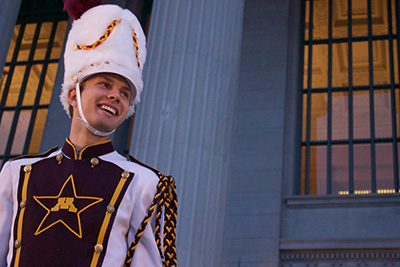