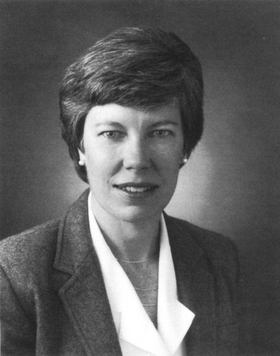 Margaret “Peggy” Cairns Etter was born on September 12, 1943. She died on June 10, 1992, from cancer. In 1974, she received her doctorate in chemistry from the University of Minnesota under the direction of Jack Gougoutas. She taught organic chemistry at Augsburg College in 1975-76, and worked at the 3M Company from 1976 to 1983. She returned to the University of Minnesota as a postdoctoral fellow with Robert Bryant in 1984 and, within a year, had secured an independent academic appointment. Peggy rose rapidly through the ranks and in 1990 was promoted to full professor. Peggy’s outstanding characteristics as a scientist were her infectious enthusiasm, uncompromising scientific standards, and creativity. Her research group made major contributions in the applications of solid-state nuclear magnetic resonance spectroscopy, the design and properties of organic non-linear optical materials, and most significantly, in the understanding and utilization of hydrogen-bonding interactions in crystals. This was reflected in nearly 80 research papers and in several landmark review articles in prestigious journals. Outside recognition in the form of fellowships from the Sloan and Bush Foundations and an Iota Sigma Pi Award for Excellence in Chemistry represent incomplete reflections of the impact of this work. One of her extramural “side projects” was to found a company called “Rochelle Crystal Corporation,” for which Peggy was named St. Paul Businessperson of the Year in 1986.

A Potpourri of Crystal Chemistry – Part I: Phase Transformations and Crystal Reactions