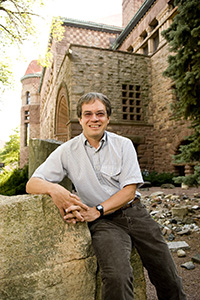 Larry Edwards is an isotope geochemist well-known for his role in the development of modern uranium-thorium (or Th-230) dating methods and his application of these methods to the study of climate history and ocean chemistry. His approaches have improved the accuracy of radiocarbon dating, with the long-sought goal of a complete calibration of the radiocarbon timescale now in sight.

Edwards champions cave deposits as recorders of historic and pre-historic climate. Using innovative strategies, he relates his cave climate histories to those from ocean sediments and from ice cores, thereby establishing patterns of changing climate in time and space. His work helps us to understand the causes of abrupt climate change and the causes of the rapid melting of ice sheets at the end of glacial cycles.

Some of his research assesses the relationship between climate change and cultural history, drawing plausible links between global shifts in rainfall patterns and major cultural changes. For example, his cave records suggest that dry conditions contributed to the demise of the Tang, Yuan, and Ming Dynasties in China. His records also suggest that ample rainfall in the early decades of the Northern Song Dynasty contributed to the large expansion of rice cultivation and population increase in this era when rice became a staple of the Chinese diet.

His cave records of the last several centuries contain some of the strongest evidence yet for human-induced climate change. Edwards is one of the most cited earth scientists in the world.