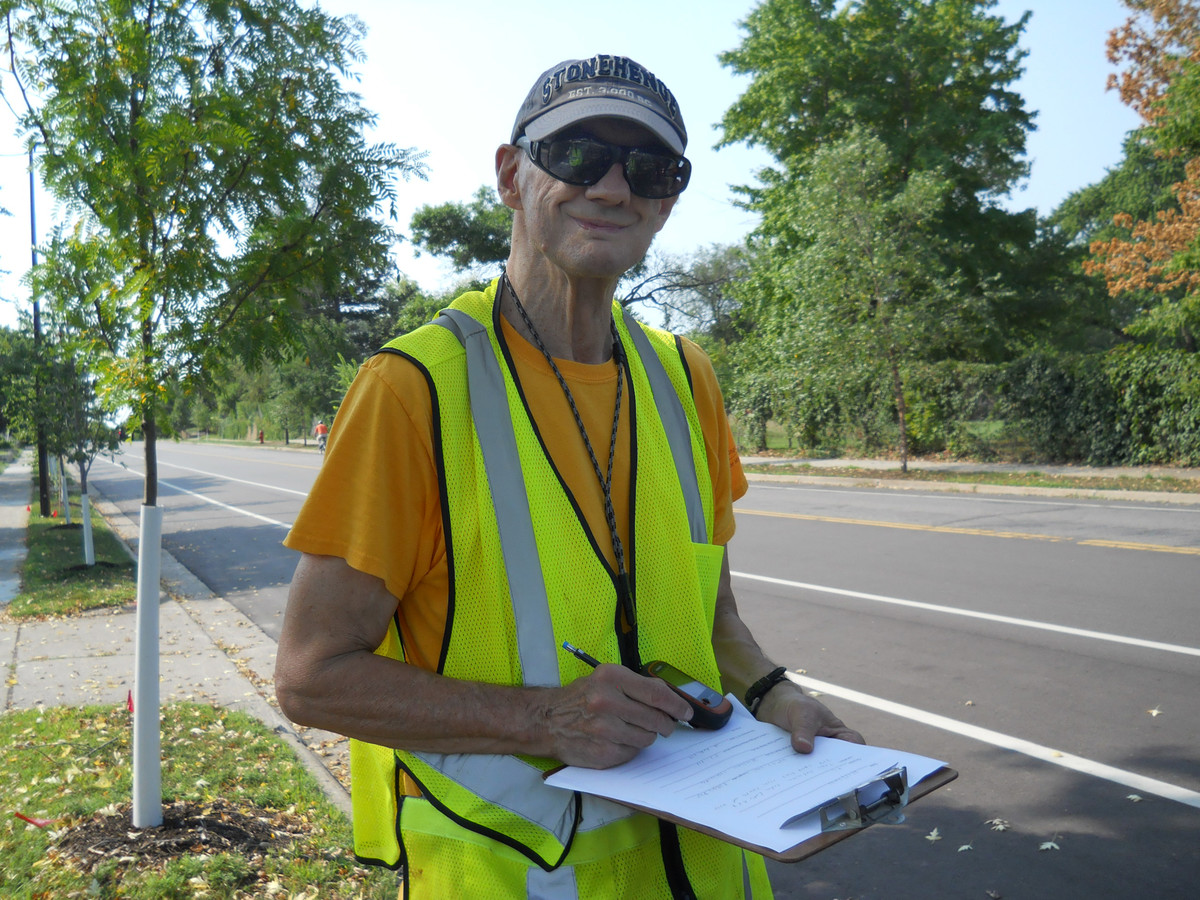 Gary Davis has a long-term interest in traffic safety. He researches the causes of vehicle crashes and how that information impacts roadway design— causal inference and decision support in highway safety. He helps engineers factor in safety as well as travel times and the endurance of materials when they design a roadway. Safety planning techniques are not as well developed as designing with speed and materials in mind. Davis has been researching how to determine which design options do (or might) bring about a change in the rate or severity of accidents, and then, how engineers can use that data to support safety-based design decisions.

A second focus of Davis’s research has been applying Bayesian statistical methods to solve some previously intractable estimation problems in transportation engineering. Some problems are hard to set up and solve with frequentist methods, but they can be broached more easily when using a Bayesian approach. So, Davis has been recasting some of those difficult problems, like quantifying uncertainty in crash reconstruction. This problem is difficult because often data and expert judgement must be combined. A Bayesian approach allows an engineer to combine the insufficient data with judgement, leading to more informative solutions.

A newer focus for Davis and his research group is how to account for partially or fully automated vehicles (AVs) and other new mobility modes. It is widely expected that the presence of AVs will change traffic conditions and driver behaviors, but exactly how is not clear. One key concern for Davis is how AVs will or should change the tools and processes by which transportation engineers implement safety planning techniques in their designs.

A resource that transportation engineers refer to when making design decisions is the Highway Safety Manual (HSM). It helps engineers predict safety consequences (changes in crash frequencies or severity) of various roadway design decisions. The crash modification factors used in the HSM are based on a statistical summary of driver/vehicle populations and behaviors collected over the last 20–30 years, years when there were no AVs on the roads.

It is no small matter to apply one set of assumptions to a new situation or population. Yet, Davis and his research group have made significant progress on ways to leverage the existing research and statistical summaries in the era of AVs.

A key breakthrough for Davis came when he began thinking about these issues as akin to medical research methodologies, deconstructing the mechanisms of crashes and thinking of the two pools of drivers, humans and AVs, as populations for evidence-based experiments. (See sidebar.) Davis and graduate student Jingru Gao developed a theoretical framework for recalibrating crash modification factors from the set of conditions prevalent in the past, with only human drivers, to new conditions involving both human drivers and AVs.

Their recalibration formula is fairly simple in principle, but applying it to particular cases requires (1) a plausible mechanism that describes how a safety-related modification works, and (2) a database reflecting how various elements (for example, initial positions of vehicles, speeds, drivers’ reaction times, or braking rates) are distributed among the various types of crashes. The Davis group is continuing to research and build a database of the details for various types of crashes, and to determine how those details correspond or differ within the two identified populations of drivers, human-only and human + AV.

Davis (2019) described the use of micro-simulation to develop an explanation of how pedestrian hybrid beacons (PHB) modify pedestrian crash likelihood. Since the literature indicated that PHBs can affect both pedestrian and driver behavior it was necessary to include both possibilities in the model. To simulate injury severity distributions similar to those recorded in a crash database, it was necessary to propose that almost all simulated drivers attempt to brake in pedestrian/ vehicle encounters. Then, changing the simulated fraction of careful pedestrians from 0–30% to 80–90% gave simulated crash modification factors similar to estimates reported in the literature. The resulting working hypothesis, then, is that PHBs achieve their crash reduction effect in large part by modifying pedestrian behavior. This is not so much a direct observation as it is an inference to the best explanation. That is, the support for the hypothesis comes from its ability to explain the data at hand. Davis proposed additional tests that might support or refute the hypothesis. This explanatory model used his group’s impact speed/injury model (Davis and Cheong, 2019) as a component and described fitting and testing an empirical model relating vehicle impact speed to pedestrian injury severity.

And earlier this year, Gao and Davis along with John Hourdos and Indrajit Chatterjee (who completed his Ph.D. in 2016), published a paper describing the development and testing of a mechanism for studying freeway rear-end crashes, including how the model could be extended to a population of vehicles equipped with intelligent cruise control and automatic brake assistance.

Five-Year Goals Davis was recently reappointed as the Richard P. Braun/CTS Chair in Transportation Engineering, and he has set some ambitious goals for his next five years as the Braun/CTS Chair.

Primary on his list for the next five years is to develop his group’s theoretical insights regarding the transferability and external validity of crash modification factors into an operational methodology. In 2019, Davis outlined a possible approach. Gao is extending those ideas and applying them to sight distance modifications at stop-controlled intersections for her doctoral thesis. Davis noted, “Although posing and coding explanatory models is not trivial, the main challenge is finding quality data for testing our explanatory models.”

One data source comes from crash reconstruction, and one emphasis will be on using data from instrumented crash tests to evaluate and validate their reconstruction methods. Davis (2017) presented an example of how this can be done. Gao and Cheong are both working with data from crash tests collected by the Southwest Association of Technical Accident Investigators. The researchers will then apply their reconstruction methods to additional cases from the National Highway Traffic Safety Administration’s National Automotive Sampling System Crashworthiness Data System (NASS CDS database). One weakness of the NASS CDS database is its limited roadway information, particularly regarding traffic control and sight distance. So, Davis plans to request data from other sources to supplement the NASS CDS database.

A second and potentially very helpful data source comes from studies of traffic conflicts and surrogate measures. The ability to extract surrogate crash measures from video has improved substantially during recent years. Davis and Gao are investigating the usefulness and availability of surrogate measures for testing and validating their mechanism models. Davis (2021) recently published a theoretical paper on using surrogate outcomes to estimate crash modification factors.

Davis also plans to write a book on the specialized techniques for applying Bayesian inference to crash reconstruction that he and his research group have developed.

Beyond that, Davis predicts even more change: “In the foreseeable future, automated vehicles, micro-mobility, and shared mobility will become more prevalent. Transportation engineers will need competence in areas such as cyber-physical systems and data analytics. Relevant courses should be implemented now to ensure that transportation engineers are ready for that future.”

The biggest issue facing transportation engineers right now is how to account for partially or fully automated vehicles and other new mobility modes. An issue for Davis, given his interest in models and tools to predict safety consequences of various highway engineering decisions, is if we do not yet understand how AVs will affect traffic, how can we make good system decisions?

This was the problem Davis has been wrestling with for a while. He gave this insight into the workings of a researcher’s mind: “Once you get a problem in mind, to some extent you look directly for solutions. Yet in another way, once you have committed to a problem, almost everything that comes by you gets filtered through that question. You are always on the lookout for any dribble of information that might be useful.”

What helped Davis in this instance was a timely seminar on mechanisms and evidence-based medicine put on by the History of Technology and the Philosophy of Science  department at UMN. A philosophy professor talked about how medical researchers try to understand diseases. The speaker addressed the medical approaches of mechanisms (for example, understanding the mechanism by which a vaccine interacts with a virus) and evidence-based medicine (for example, assessing the effectiveness of a vaccine with a clinical trial). An ongoing debate involves the importance of mechanism-based understanding to clinical practice, and a case can be made that a mechanism-based understanding can be helpful in deciding when the findings of a clinical trial can be generalized to populations not included in the trial.

“AS I LISTENED,” SAID DAVIS, “A LIGHTBULB WENT OFF, AND I THOUGHT, THAT IS EXACTLY WHAT I HAVE BEEN CASTING AROUND FOR IN THE LAST COUPLE YEARS!”

In medical research the bind seems to be, when can a conclusion from one clinical trial transfer successfully to other populations? At an abstract/structural level, Davis saw that his  questions could be approached with something like the medical research model: when can the statistical summary data of the last 20-30 years be applied to a new population of drivers?

“As I listened,” said Davis, “a lightbulb went off, and I thought, that is exactly what I have been casting around for in the last couple years! If we understand enough about the  mechanisms of crashes, then we might be able to move that model from human drivers to AVs.”

“This led us to analytic work done by researchers at UCLA, on identifying conditions justifying when causal knowledge learned in one situation could be applied to other, different situations, which then led to the paper Jingru Gao and I wrote on how data on the distributions of crash surrogates could, in principle, be used to recalibrate crash modification factors.”