When ALI EBRAHIMIAN came to the University of Minnesota, it was his first time living outside his native Iran. Ebrahimian had been a consulting engineer in the area of stormwater networks for 14 years and had developed a good understanding of the problems involved in managing stormwater runoff in urban areas.

Even though he had been working in the field, when he began his doctoral studies in Iran, he learned that much new work was being done and that improved methods had been developed for solving stormwater management problems. He began to follow the work of pioneers, like CEGE Professor John Gulliver. He discovered an active stormwater community in Minnesota and decided to complete his Ph.D. at UMN.

The first winter he and his wife came was very cold and snowy, but they were grateful for the opportunity. They learned to love the snow and the lakes. “It is the land of 10,000 lakes, we felt we must embrace them!” They developed a special fondness for Lake Harriet in Minneapolis. After talking with Ebrahimian for a while, it is easy to see that he lives out his philosophy: “You can enjoy all things when you are happy with your life.” Ebrahimian seems to be sincerely happy.

His three years at UMN have been busy and productive. He has been studying stormwater management and ways to improve how cities predict and respond to storms. The challenges are growing— as cities get built up more and more, less ground open to absorb rainwater so more water is running through storm sewers and needing treatment. 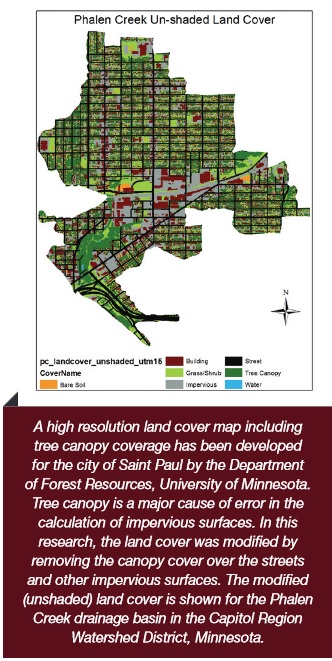 Ebrahimian’s objective has been developing a predictive model to estimate the hydraulically connected (effective) impervious area for urban runoff within a set boundary to help manage stormwater runoff. He has approached this problem by studying gauged and ungauged watersheds. Gauged watersheds are those areas for which rainfall and runoff data is known (previously collected). He was able to study 40 gauged urban watersheds from the Twin Cities; Madison, Wisconsin; and Austin, Texas. He analyzed this data to better understand runoff generation mechanisms and how pervious and impervious areas actually affect runoff. Ebrahimian then used that analysis to improve the commonly used model which was developed in 1993.

For the second stage of his research, he used the results of his improved model to analyze ungauged watersheds using spatial data on land cover and soil (which is available for all of the US) and to develop a new model for estimating the effective impervious area in ungauged watersheds.

His advisor, Professor John Gulliver, routinely has research project guided in part by a Technical Advisory Panel, a common practice for projects funded by the Local Road Research Board. Ebrahimian’s panel consisted of people in various roles in government and engineering. He presented his work to the panel at the completion of each major task, and they gave him feedback. Ebrahimian was very grateful for the expert input and practical advice that enhanced his project and the usability of his results.

The results of Ebrahimian’s research are immediately applicable. The improved method can be used on gauged watersheds by cities, watershed districts, departments of transportation, and consultants. The outcomes from the ungauged watershed model will be applied at the planning level to design effective stormwater treatment facilities and stormwater management processes. Ebrahimian’s research has implications for water quantity, and will contribute to greater understanding of water quality in the future.